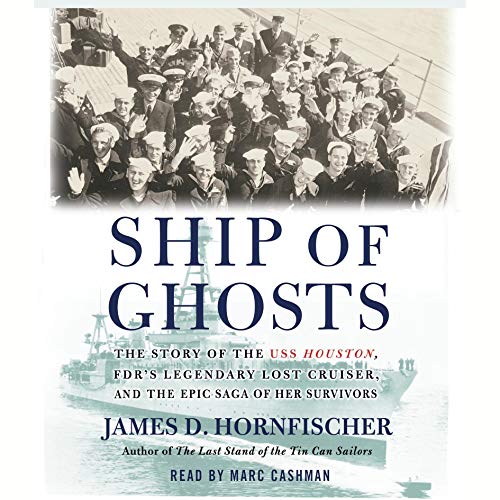 James D. Hornfischer, acclaimed author of The Last Stand of the Tin Can Sailors, delivers an unflinching account of heroism and honor at the limit of human endurance, and of the unsung warriors who waged one of the most remarkable battles of World War II.

Renowned as FDR's favorite warship, the cruiser USS Houston was a prize target trapped in the far Pacific after Pearl Harbor. Without hope of reinforcement, her crew faced a superior Japanese force ruthlessly committed to total conquest.

Hornfischer brings to life the awesome terror of nighttime naval battles that turned decks into strobe-lit slaughterhouses, until the Houston was finally sunk and its survivors taken prisoner.

For more than three years, the war continued for the crew in the brutal privation of jungle POW camps. But the men of the Houston fought back against their dehumanization with dignity, ingenuity, sabotage, willpower, and the undying faith that their country would prevail.

Using journals and letters, rare historical documents, and the eyewitness accounts of the Houston's survivors, James Hornfischer has crafted an account of human valor so riveting and awe-inspiring, it's easy to forget that every single word of it is true.

What listeners say about Ship of Ghosts

While I enjoyed this book, I must say that the first 6 hours were somewhat tedious. The author provided information only a Navy man would love - info on ship size and gun capacity, along with details about the longitude and latitude of the battle site. The remaining 12 hours or so were more interesting as he described the POW camps in Burma and Thailand. You need to have a real love of history to want to invest the 18 hours involved in finishing this book.

Ship of Ghoasts tells the story of the cruiser USS Houston survivors, sunk early in the war. The crewmen who survived were all captured and were used as forced labor. the helped in building the railroad made famous by the highly inaccurate "Bridge on the River Kwai."

Still it's a book worthwhile listening too if you have an interest in WW2 naval history.

I picked this book because it tells a part of the WWII story that is seldom told and it happened in a place I have some familiarity with from my own experiences. Having read Unbroken and Ghost Soldiers I was expecting a history of similar grit, something I think the story deserves and for which there was ample material. Hornfischer, however, tells a gentler kind of tale; one that touches the surface of a lot but rarely digs deep. That said, I learned a lot about the east Asia campaign (and came away with a particularly poor image of the Dutch performance).

In this instance the reader was a poor choice in my opinion. The book deserves a certain edge, not Dean's flat reading. That definitely affected my experience, but I do not believe it affected my evaluation of the content.

One of the best WW II history books written.

This is one of the most detailed historical accounts of World War II I have ever heard. The material is meticulously researched and presented to the reader in a way that keeps you riveted to your iPod or MP3 player.
The author presents the material in a completely unbiased way which lets the reader come to their own conclusions about the war effort in Asia and the dubious decisions made by Naval and political leaders. Unfortunately when inept leaders make bad decisions, it is usually the poor grunts and swabbies that pay the ultimate price.
Hornfischers book also makes a very solid case for why American soldiers, sailors and Marines should never be under the command of foreign military leaders.
If I could give this book 10 stars I would do so.

After listening to this book I have a new found respect for the Americans who fought for our country during World War II. I can only hope that, if put in the same situation, I would have 1/10 of the courage and fortitude that the men captured in the Pacific had. Excellent book.

Gratitude for Our Brave Forefathers

A thoroughly well written, pleasantly read story about some brave men. Part of history, you'd have to be interested in World War 11, Pacific Arena, navy, Japanese atrocities and that type of event. but it is always gratifying to read of unsung heroes and I knew nothing of the USS Houston. I am glad I now do; I shall visit the Ship's Bell in Houston soon - it had an effect.

This is one of the best war books that I have ever read. It is exciting, thrilling, realistic and even gives you the chills as you hear and imagine all of the things that these men have to go through.

One of the best books I have a ever read.

The story.
Which focuses on the real life events of a group of American sailors during early and urgent months through their liberation during the second world war. I have been reading military/strategic history for over 20 years and I cannot stress how powerful this book is.
A friend of my father's (who was an USN Admiral) lent me the book almost a decade ago and it instantly set the bar for all Naval reading the same way Band Of Brothers did for infantry history.
It should be a testament that I have purchased the audio version in spite of the fact I have already read the book.

this was an excellent book. what a wonderful way to learn history of the war in the pacific and read about the men who fought, died and survived. Their ordeal was horrific but their stamina and strength was amazing under such terrible conditions. I highly recommend this book to anyone who enjoys history and biography and just wants to broaden their minds. looking for others about this period to expand my knowledge.

not narrated by Robertson Dean

Did Robertson Dean do a good job differentiating all the characters? How?

It was narrated by Marc Cashman. He wasn't a bad narratory, but he certainly didn't read like Mr. Dean. And he pronounced foc'sle like fox-hall, which bugged me a little. I know next to nothing about nautical terminology, but I've never heard it pronounced like that.