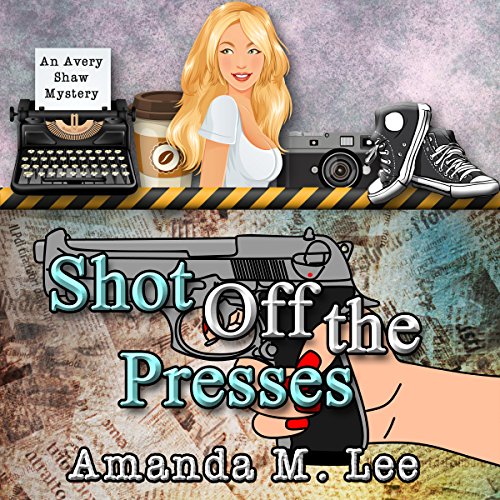 Shot Off The Presses

Life should be good for Avery Shaw. She's got a hunky new boyfriend in local pawnshop owner (and sometime private detective) Elliot Kane, her cousin Lexie swears she'll be moving out of her house one day "real soon" and her family has been relatively quiet for a whole week. That's practically perfection in Avery's world.

Then, what appears to be a random freeway shooting resulting in the death of a young mother, causes upheaval on just about every front. County Sheriff Jake Farrell announces that the same gun used in the current shooting was also used in a similar shooting one county over a few weeks before. A joint task force is assembled and the denizens of southeastern Michigan are on edge - including Elliot and Jake, who still can't quite seem to make amends with one another.

Avery is on the case, but she's got a few distractions blocking her way. The commander of the local National Guard base is acting cagey, there's a new public relations liaison in the sheriff's department that is laying down the law about media leaks and her grandfather is refusing to report for jury duty which, most likely, will result in his own incarceration.

When you couple that with Carly's upcoming wedding, the opening of Lexie's new yoga studio and Avery's mom's insistence that Thundercats shoes are not appropriate footwear for public outings, and Avery's happiness quotient continues to plummet.

Avery is determined to get the story - even when it becomes apparent that her efforts have turned the shooter's attention to her. When Avery finally does find an answer, will she survive to tell anyone about it?

What listeners say about Shot Off The Presses

parts of the audible repeated its self

parts of the audible repeated itself. It got jumbled up the book itself is good though

The Princess of Journalistic Snark

Avery Shaw is back again and in trouble but for her that's just a normal day. The loveable snarky princess is back and in deep up to her neck in trouble everywhere she turns including with boyfriend Elliott and her ex Jake. The characters are still as quirky as ever especially with Angel Clark at the helm as the always amazing narrator. I still find a Duncan and Marvin to be utterly annoying as ever. The story had me laughing from the beginning till the end with the witty banter between the characters. I found the book to be well written and developed. I highly recommend this book.

the storylines get better n better!

but. as much as this narrator is really growing on me, can you say 'editor'?! idk how many times exactly, many more than several tho, the do-over lines of the narrator were not edited out, so there were a Lot of instances where you'll hear the same line repeated with different inflection. just a very poor job on the part of the air quote editor, ive never listened to an audio book and heard anything of the sort. shit and togetherness and things that make ya go...

This is such a good book, but the editing of the narration is horrific. There are so many lines repeated. not sure how this has slipped through the cracks, but it's a frustrating listen.

This recording has a lot of repeats in it. It's still a pretty good book though.

Everyone's favorite self-absorbed trouble-maker is back being her usual self! Being amused while trying to figure out the culprit is always a joy for me!

This time I was taken by surprise, so bravo all around!

Angel Clark did an awesome job, as always!

Where does Shot Off The Presses rank among all the audiobooks you’ve listened to so far?

It is probably in the top 10 of my list

It did not keep me on the edge of my seat but I didn't expect it to. This is a lighter weight mystery and kept me entertained

Like liked Avery Shaw although she was a little too whiny for my tastes. The voice was not my favorite. A little too high pitched.

What did you love best about Shot Off The Presses?

Easy to get into, and a lot of fun. You will find your self laughing with this author. All her books are full of snark, and smart @$$ comments.

Between a crazy disfunctional family, a coocky main character that consistly gets in and out of trouble, let's not forget the unforseen ending. .. I was unable to hold my laughter.