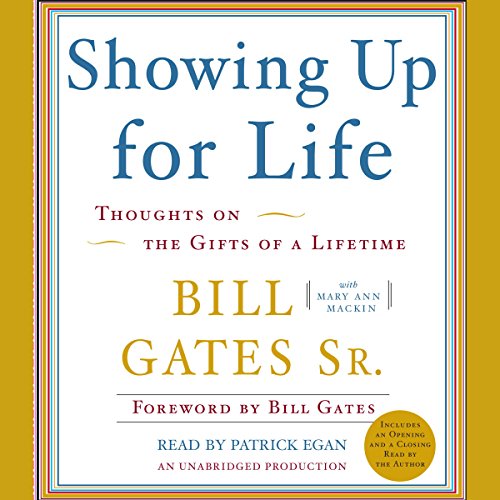 Showing Up for Life

A heartfelt, deeply personal book, Showing Up for Life shines a bright light on the values and principles that Bill Gates Sr. has learned over a lifetime of “showing up” - lessons that he learned growing up in the Great Depression, and which he instilled in his children and continues to practice on the world stage as the co-chair of the Bill & Melinda Gates Foundation.

Through the course of several dozen narratives arranged in roughly chronological fashion, Gates introduces the people and experiences that influenced his thinking and guided his moral compass. Among them: The scoutmaster who taught him about teamwork and self reliance; his famous son, Trey, whose curiosity and passion for computers and software led him to ultimately co-found Microsoft. Through revealing stories of his daughters, Kristi and Libby; his late wife Mary, and his current wife Mimi; and his work with Nelson Mandela and Jimmy Carter, among others, he discusses the importance of hard work, getting along, honoring a confidence, speaking out, and much more.

Showing Up for Life translates one man’s experiences over four score years of living into an inspiring road map for listeners everywhere.

As Bill Gates Sr. puts it:

I’m 83 years old. Representing the Bill & Melinda Gates Foundation and everyone who is a part of it has given me the opportunity to see more of the world and its rich possibilities than most people ever do. I never imagined that I’d be working this late in life, or enjoying it so much.

"Bill Senior is as wise as his son is brilliant. I've learned a lot from both of them and believe everyone can benefit from the insights Bill Senior shares in this book." (Warren Buffett)
"Bill Gates Sr. is a wonderful example of what it means to be a global citizen, teaching us how we can work together for a more just and fair society." (Jimmy Carter)
"Bill Gates Sr. does more than just show up in this charming and instructive guide to a good life. He shares lessons learned as a husband, a father, a lawyer, a philanthropist and a citizen. Showing up for life is a gift of great value." (Tom Brokaw)

What listeners say about Showing Up for Life

I picked up this book because it was reccomended to me by my cousin and I thought why not. But this book was absolutely empowering and refreshing. It speaks from a very unique and very important perspective and it completely shifted my way of thinking. Because of this book I was able to FINALLY have the courage to swallow my fear and go public with my writing and get my blog going. I absolutely loved his emphasis on the importance of being a good citizen- something that is very much forgotten in today’s individually driven society. I recommend this read for anyone, of any age. Makes me love Bill Gates (both of them) that much more.

Inspiring to see how few people are about to change the world for better. Great suited narrator with easy listening. Strongly recommend this program.

This is good stuff. Mr Gates points out the things all of us know or should know but forget about while being caught up in life.

Boring, disorganized and not inspiring

What disappointed you about Showing Up for Life?

The book wasn't very organized. It didn't have much in usable material. It was mostly just a man bragging about how his family was raised. This wouldn't even be anywhere on the radar if it didn't have the last name of Gates on the cover.

Um.. The material was bad enough I doubt the performance would matter.

Pass on this one.

Last Paragraph is the BEST PART!

Where does Showing Up for Life rank among all the audiobooks you’ve listened to so far?

I wasn't too keen on the reader, in fact, most of the time I found myself spacing out due to the reader's monotone voice. However, the content was fairly good (the last few paragraphs are the best!). I'd rank this in the middle.

What other book might you compare Showing Up for Life to and why?

The pace was perfect, but the level of excitement or any fluctuation in the his voice bored me.

I'd recommend it, the main point is exactly what the title is referring to. "Showing up" and how to show up, examples of when people show up and how it can really alter and enhance one's life. I loved the stories, especially hearing about Gammi.

It's interesting to hear some thoughts directly from the father of the man responsible for Microsoft. Just another example of how good values make the world a better place.

As a conservative reader...

So glad I picked this up. Loved the family stories and traditions. The empowered women in this family was inspiring. I cringed a bit at the pro choice/planned parenthood parts, but respect the family nonetheless, and honestly moved a little to the center in my heart. Thanks Bill Sr

Fantastic words of wisdom that transend decades. I cannot imagine a world in which this book would not be relevant.

This book came highly recommended from various influencers, so I expected that it would be deeper in nature. A good portion of it could be summed up by the title, literally showing up for events in your life, prioritizing family and friends. There were nice anecdotes about a young Bill Gates, but that did not overly interest me.

It's short and either not very deep or I am too young to appreciate the depth. For now I'll assume the former.