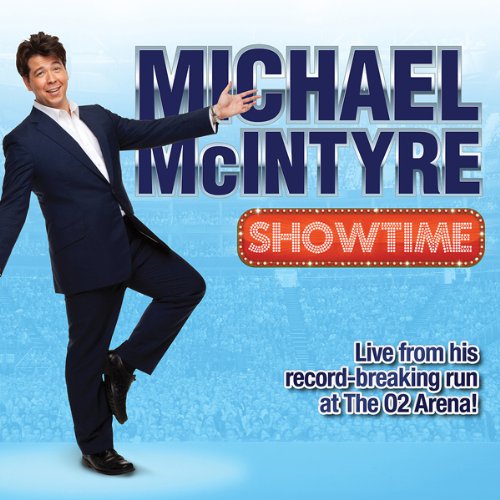 Showtime! is Michael McIntyre at his breath-taking best. Following his two record-breaking shows, Live and Laughing and Hello Wembley, Michael returns with his most hilarious show yet. Recorded during his phenomenal 10 night run at the O2 in London and part of his 71-date arena tour playing to over 700,000 fans, Michael raises the bar once again with his relentless energy and razor-sharp observations that has the crowd roaring with laughter.

What listeners say about Showtime

Why am I just discovering you??

I can’t believe I had never heard of Michael McIntyre as recently as 3 months ago. Shame on me!
I’m makeup for lost time now though, listening and watching as much of his comedy as I can.

Loved this audio “book” and can’t wait to listen again and to his other work!

One of the worst recordings of a live performance, you could hardly hear him among all the background noises.

Michael is a great comedian with great observations and jokes about the world around him!

Michael McIntyre is just hilarious! I love everything that he does. The reason, in my opinion, that his comedy is so funny is because he uses the most simple, every day experiences that everyone can relate to and he shows the humor in them. He always circles back on his jokes and will make reference to joke that he said a little while earlier which adds a great element to his stand up. I truly love every bit that he has!

Outstanding comedian. enjoyed this performance even though I've seen most of it on YouTube clips. always leaves you laughing with clean good humor.

Better to see this than listen to it

Michael is hilarious but he is better to be seen than heard as he is very animated comedian and you can’t see what he is doing on audible. But as a person he is just brilliant. The dentist story is one of the best things out there and I was in stitching as I was on my daily walk. People must have thought I was mad.

It is put your hands between your legs, so you wouldn't pee yourself funny!
I wasn't sure how a show would translate to Radioshow, but I didn't need to worry. I think there were about 3 placed on the whole show one wanted to see actually what was going on the stage.