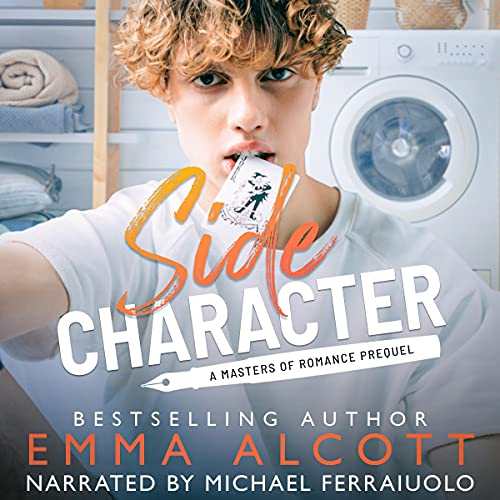 Written by: Emma Alcott
Narrated by: Michael Ferraiuolo
Try for $0.00

And tonight, that ahem is going to make my mouth feel like a Tokyo subway car at rush hour. We’re talking crowded. Crammed. Absolutely stuffed. And if I’m lucky, a few stops later we’ll both get off at the same time and head home together to see what kind of trouble we can get up to when bed is our final destination.

But you know what they say about the best-laid plans....

It's a good thing I'm resourceful, because come what may, I'm not going to stop until I make Sawyer mine.

Side Character is a stand-alone short story set in the Masters of Romance universe. While there are no authors in this one, there is a sassy best friend who messes things up spectacularly, but still manages to land the man of his dreams. Get ready for love, laughter, and some serious steam. No cheating and no love triangles, guaranteed.

What listeners say about Side Character

This was a sweet opposites attract romance.

The storyline was engaging and compelling and the characters were likeable and well fleshed out.

The narration was enjoyable and appealed to me

Short but steamy and sweet

What if your crush for almost a decade turns out to be crushing on you as well?

This is a sweet short story between Sawyer and Gavin. Both crushing on each other unbeknownst to either party.

It’s really sweet, also inject with a lot of Emma Alcott’s signature sense of humor. I love the most supportive dude bros.

I hope there will be more this couple. 💕

This was a very short story so it wasn't deep or emotional but it was okay.

The narration was the only reason I kept going even though it's just over an hour long.

Loved this short story from Emma Alcott! It was fun and hit with fabulous characters and a solid storyline. Michael F does a great job as usual!

Love this short and quick story. Gavin has had a crush on Sawyer for years and apparently it was mutual even though one didn’t know about the other. This may be a quick listen but its packed with humor, cuteness, and love that you wont want to miss. It’s a great part of the series and the narrator is absolutely fabulous. I voluntarily reviewed a gifted copy of this audio book.

This was such a funny listen and one you need to brace yourself for because it’ll have you laughing out loud throughout the whole story. Between the story and the narration it is an absolutely wonderful audiobook for a quick listen. I loved the characters and how adorably ridiculous they were while still having meaningful stories. Overall, I highly recommend this fun-sized bit of audiobook goodness.

Michael Ferraiuolo knocks the narration of this book out of the park. It was hilarious, snarky and oh so steamy!

Michael Ferraiulo is one of my favorite narrators for a good reason. He never fails to knock it out of the park!
Side Character is the perfect afternoon snack. Short, sweet and extra steamy!
Gavin and Sawyer have been secretly crushing on each other. What better time than a New Years party to make something happen!
This story is a nice set up for the Masters of Romance series and I can't wait for more!

Michael Ferraiuolo does it again with this super sweet and funny start of a new favorite m/m books by Emma Alcott.
I’m looking forward to the next book!