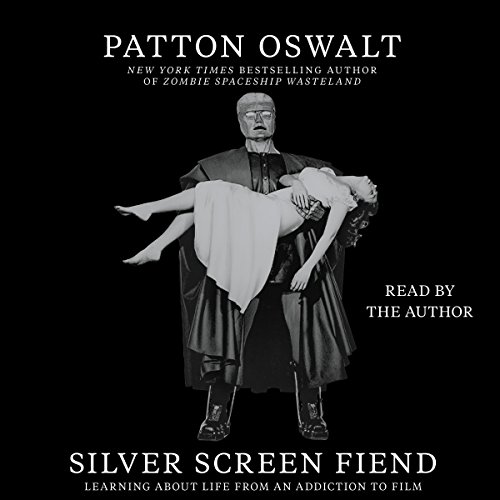 New York Times best-selling author, comedian, and actor Patton Oswalt shares his entertaining memoir about coming of age as a performer and writer in the late '90s while obsessively watching classic films at the legendary New Beverly Cinema in Los Angeles.

Between 1995 and 1999, Patton Oswalt lived with an unshakeable addiction. It wasn't drugs, alcohol, or sex. It was film. After moving to L.A., Oswalt became a huge film buff, absorbing classics and new releases at least three nights a week at the New Beverly Cinema. Silver screen celluloid became Patton's life schoolbook, informing his notions of acting, writing, comedy, and relationships. Set in the nascent days of the alternative comedy scene, Oswalt's memoir chronicles his journey from fledgling stand-up comedian to self-assured sitcom actor, with the colorful New Beverly collective supporting him all along the way.

Ideally timed for awards season, when everyone's mind is on Hollywood, Silver Screen Fiend follows up on the terrific reception of Oswalt's New York Times best-selling debut, Zombie Spaceship Wasteland. Already a beloved fixture on the comedy stage, on television, and in film - not to mention his 1.1 million Twitter followers - Oswalt announces, with this second book, that he's also here to stay on the page.

A powerful personal story about addiction and love. A true gift to his fans. I look forward to his future writings.

While the book does have a good chunk of stuff about movies and the funny stories and internal monologues that result from watching so many, that's not what this book is about. The book is more about the early days of Oswalt's comedy career after having moved to California. Living in San Francisco, working as a sketch writer for MadTV, the legend of The Largo--so many things that Oswalt has hinted at and revealed glimpses of throughout his stand-up career-- are fleshed out in much greater detail in this book.

Now you should know that the reason I bought the book is because I'm a huge Patton Oswalt fan. He just does it for me.* I gave it five stars because it delivered exactly what I wanted--HAVE WANTED for about ten years: a closer examination of how Patton got to where he is. I do stand-up myself and he's my inspiration for getting into comedy. So these are the tales and looks behind the curtain I've been waiting for. Zombie/Spaceship/Wasteland was akin to a look inside Bruce Wayne's mind (especially his childhood and adolescent mind) before he left Gotham to travel the world to learn the skills he'd need to become the Caped Crusader. Silver Screen Fiend is more like Batman Begins, as it offers a better look at his training, his internal struggles, and his early career.

And since I'm a fan of his, I enjoy listening to Patton narrate. So if you are a fan of his stand-up and really like behind the scenes stories about comedy, writing for TV, being a movie extra, and listening to people talk about movies, this book is for you.

*(I saw Big Fan and Ratatouille for the same reason; I'd personally recommend Ratatouille because everyone likes a good Pixar flick and I'd recommend Big Fan if you like football, particularly The New York Giants.)

I wanted to like this book, but what I didn't realize when I hastily bought it was that it was for those who breathe the intricate details about movies. I have little interest in movies so this was not a relatable book for me, nor was it interesting enough for me to want to continue to listen. But Patton's writing and verbiage is beautiful. It is one of few of the very best writing I have ever heard/read - so I listened just for his descriptions of things. I have newly found respect and admiration for him. He is a genius and a poet. But the book's content was not for me.

I can't say enough about this book. It was beautifully written, and would have worked just as well as fiction as a memoir, so well done was the prose and character arc. I know nothing about movies, but I still gobbled up the story. As literary as you'd like without being dry. I'll definitely read again.

'My Dinner with Andre' Meets 'A Season in Hell'

Using an impressive confessionatory style, Patton Oswalt talks about his love of film and the dangers of overindulgence in your passion to the exclusion of all else. And he talks about film: brilliantly, passionately and critically. It's also, strangely, a love-song to Los Angeles' Cinema Revival Houses and the act of going to the movies.

I devoured it compulsively. I recommend you do the same.

The best and worst from Oswalt

It's captivating to listen to someone I consider to be a comedic genius talk candidly about his own life. If only what he were talking about was something more in depth than just the movies he really liked. I am a movie lover myself, but this felt more like someone just listing off a checklist of films as opposed to really diving deep into what made these movies great.

Funny, chock full of films but not just about film

This is smart and funny. Biographical and so much more. What a surprise, I hadn't known much about Patton before this. Will now read his other book.

The film references and how he remembers so many acting performances, famous and not so famous lines from movies, scenes from movies.

His rapid reading style, intellectual heft, quips and jokes. The tone of is voice is fantastic.

Laugh more than cry, but there are moments in the story... Well, let's just say it was both funny and at times poignant.

Thank the reel this book was written.

I loved his first book, but was a little bummed that it didn't say a whole lot about his personal life. This one does, and does so, brilliantly. If you love Patton, you'll love this.

Even if you're not a fan of Patton Oswalt, you've got to appreciate his affection for all-things cinema in this smart, telling memoir.

Love him, I love his humor but he needs to slow down, take a breath

i loved this book. it touched me deeply. patton is a great narrator overall and brings such life to it.