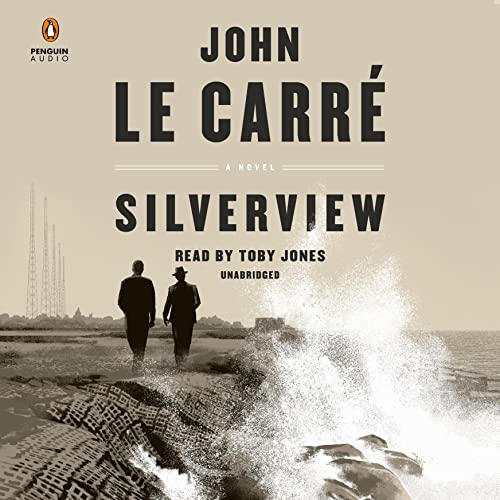 In his last completed novel, John le Carré turns his focus to the world that occupied his writing for the past sixty years - the secret world itself.

Named a most anticipated book of the fall by the Associated Press, TIME, People, Entertainment Weekly, Washington Post, AARP, The Millions, Lit Hub, Thrillist, and more

Julian Lawndsley has renounced his high-flying job in the city for a simpler life running a bookshop in a small English seaside town. But only a couple of months into his new career, Julian’s evening is disrupted by a visitor. Edward, a Polish émigré living in Silverview, the big house on the edge of town, seems to know a lot about Julian’s family and is rather too interested in the inner workings of his modest new enterprise.

When a letter turns up at the door of a spy chief in London warning him of a dangerous leak, the investigations lead him to this quiet town by the sea....

Silverview is the mesmerizing story of an encounter between innocence and experience and between public duty and private morals. In his inimitable voice John le Carré, the greatest chronicler of our age, seeks to answer the question of what we truly owe to the people we love.

“A fitting requiem for the career of the man who brought a new level of complexity and humanity to espionage fiction.” (Booklist, starred review)

“[In Silverview,] le Carré plays out revelations about [the characters] slowly and teasingly, and, in the end, they’re as damning as you could wish. The real drama, however, is in the present, where all the characters are hopelessly intertwined and compromised by their loves and loyalties, none of them innocent.... The author’s last few novels have been increasingly valedictory, but this one is truly haunted by intimations of mortality.” (Kirkus Reviews, starred review)

What listeners say about Silverview

Le Carré's SILVERVIEW brings him and us back home

Through his incomparable character development, Le Carré once again creates a personal, human story interwoven with the hairy tentacles of the British Secret Service. As if he's come home for his last novel (?... Is there more?), published posthumously, Le Carré brings us back into the world about which he always wrote best - his unique, insightful, and exquisitely expressed view of the few highs and many lows intrinsic to the world of western spies. His heroes go against the grain, and the values they personify indict our consumptive arrogance and help us to recognize how we might make things better. Never matched for quality, long live Le Carré.

The hubris of rating authors like le Carré makes me queasy. This review is simply an eager audience member commenting on how entertained I was by the experience.
3 stars in my book means above average. Pretty good.
His books have frequently made me feel that I’m ignorant about a lot of behind the scenes assumptions, history, (British) cultural quirks, etc. Silverview is no different. I have no doubt I’m ignorant about a great many things! Nonetheless, it is a compelling story with well imagined & detailed characters. I enjoyed the ride & was eager for explanations at the end. The concluding scenes are perhaps too subtle for my American viewpoint. I didn’t find it satisfying.
~Andy

Completed in one session . A beautiful intertwining of emotions and relationships all to a background of historical events and machinations of the spy industry and decent people doing their best

A loyal follower of Le Carre might note the journey of his own polished eye for the nuances of human nature in this story. This is a great story about peeling away the many layers of a great con.

Sadly, this was his last known work before his passing. He is one of the great writers of our time and will be sorely missed.

One last treat from the Master…

Having been saddened by David Cornwell’s passing passing last year, I was pleasantly surprised to find an advanced sale offer for Silverview on Audible. One last brilliantly written story from John le Carré. Toby Jones’s narration was a treat to listen to. This was for me a special and unexpected find, and one that did not disappoint.

wonderful surprise from the master. return to shorter tight form of story, but colored with traces of Alec, George, Connie...

At this point In this book I can only say the narration is very pleasant but I have no clue what the story is really about. I give up

too obtuse and slow

I thought iI was used to LeCarre but this one failed to intrigue me. The character development was all over the place

Couldn’t make it past Chapter 2. This is not the Le Carre that I’ve been a fan of for 20 year. I don’t actually believe that Le Carre wrote this or, if he did, I don’t believe he was well.

Dislike audible since new owner. Messes with my iPad a lot and now have 2 audible subs a pain