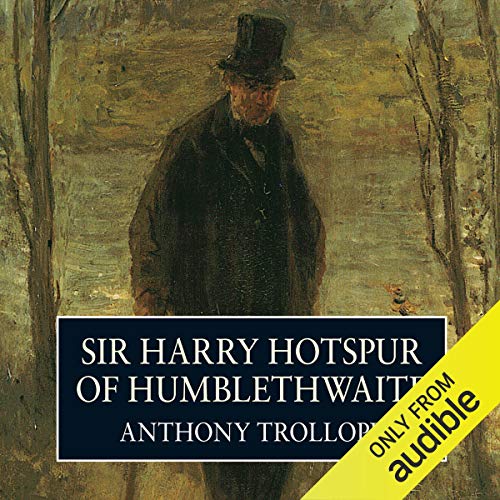 Written by: Anthony Trollope
Narrated by: Tony Britton
Try for $0.00

On the death of his son, Sir Harry Hotspur had determined to give his property to his daughter Emily. She is beautiful and as strong-willed and high-principled as her father. Then she falls in love with the black-sheep of the family.
Public Domain (P)2014 Audible, Inc.
Show more Show less

What listeners say about Sir Harry Hotspur of Humblethwaite

This was my introduction to Tony Britton as a narrator and I am very impressed. Timothy West and Frederick Davidson come to mind as comparable in talent.

This book could have been titled Emily after the heroine Miss Hotspur. In some ways she reminds me of Marianne Dashwood "Sense and Sensibility" in her naivet? and of Fanny Price "Mansfield Park" in the strength of her resolve. Like her sister heroines, Emily is not the kind of woman one would willingly cross. The thought of the probable results would terrify me. However, George Hotspur, the anti hero of the piece, had no such terrors. Glib as Willoughby and smooth as Henry Crawford, he was sure of his ability to talk his way out of or into any situation and confident of his ability with women. Like his fellow scoundrels, his weakness of character comes into play. I am not so satisfied with Trollope's bitter sweet conclusion of this little tale but one can't have everything.

Tony Britton has a beautiful voice and superlative diction. I thoroughly enjoyed both the story and the performance. This is an interesting book and the characters are engrossing.

An excellent narrator cannot redeem Trollope's maudlin tale of failed romance between a bad man and the puritanical, delusional woman who inexplicably loves him. The crux of the story is told in the first two hours; the remaining five hours are devoted to the characters' interminable vacillating. From the endless moping - and and pointless hoping - of Trollope's reality-challenged heroine, I conclude that upperclass women of this era had way too much free time ... to think about themselves. Listen at your own risk.

Sweet and sad and marred by prejudice

One of the sweetest, saddest stories of Trollope that I've read. Cousin George, who is a bounder beyond redemption, convinces himself that he loves Emily, and convinces her too; but as her father Sir Harry suspects, he really just wants her money. The result destroys more than one person, emotionally if not physically. Tony Britton gives a wonderful reading.

One thing has to be said, though. One of the darkest crimes charged against George is that he’s in hock to the Jews. Were he in debt to good Anglicans, it wouldn't have been held against him, at least not to the same extent. Reading Trollope can be exasperating.

How could someone who writes such genial fiction, with such engaging characters, continually mar his writing with this ugly prejudice? It's not a question of Trollope simply being a man of his time. The same period gave birth to novels with deeply drawn, sympathetic Jewish characters: novels like Daniel Deronda and Dickens’ Our Mutual Friend. Enjoying Trollope, as I do, can sometimes be a cringeworthy experience. I would have given the story 5 stars otherwise.

I love most of Trollope's books as I did this one except I was completely surprised with the ending Trollope gave.