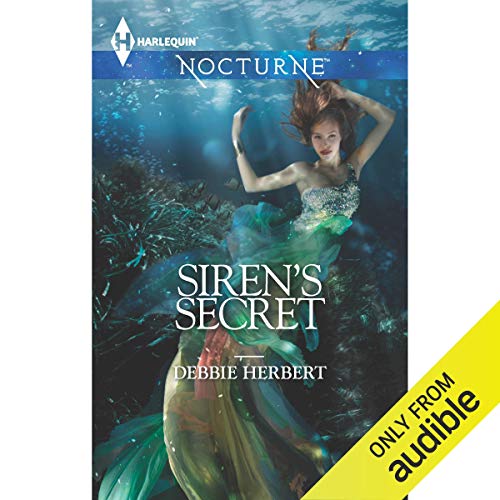 Written by: Debbie Herbert
Narrated by: Stephanie Bentley
Try for $0.00

In Debbie Herbert's debut novel, there are two secrets, each one with a deadly consequence…Shelly Connors's worlds - on land and in the sea - are turned upside down when an evening swim turns into a nightmare. On a sweltering night deep in the bayou, the mystical mermaid witnesses a horrifying act. With a monstrous killer now hot on her trail, her life and the lives of her kin are in jeopardy.

Terrified of becoming the next victim, Shelly has no choice but to turn to Sheriff Tillman Angier. Tillman has had his intense gray eyes on the sultry honey-haired beauty for a while. The feelings are mutual…and impossible to ignore. But he's determined to solve the murders, and he knows Shelly's hiding something. Can she trust him with her deepest secret?

What listeners say about Siren's Secret

This story was ok but the narrator was just terrible. I can ignore a lot of things for a good story but this one was unbearable. Her cadences were off and she put emphasis on the wrong words. Her character voices were annoying and offputting. The male voices were not as bad as the female voices. She mispronounced several words. It was so bad I stopped listening after the first few chapters and bought the print version. I hated it THAT much. I will NEVER listen to another book narrated by this woman. Do yourself a favor and buy this book in print. Even free as part of the unlimited romance package I would not listen to this title.

Great read. Exciting from the beginning. Nice sexual tension and, eventually, sex. Nice love story. Nice suspense story.
Really liked Tillman and Shelly. I thought Jet was a little brash but I liked her, and Lily. Melkie definitely had some problems!!
I would definitely recommend this book and read this author again.

As to the narrator: She did most of the voices OK but I have to tell you it sounded like she was gasping before almost every new sentence she took such a noisy breath. I finished the book but I could never listen to her again. And I had to cringe every time she did Tia's voice, it was sooo bad. Ms. Bentley needs to do someting about her loud intakes of breath while reading or find a new line of work. Sorry!

Serial Killer with a side of Sea Creature

If you could sum up Siren's Secret in three words, what would they be?

Definitely when the Serial Killer breaks into Shelley's house and leaves behind the panties and broken mermaid figurine.

When the Serial Killer remembers that one good memory with his mother.

Siren's Secret by Debbie Herbert is part of Harlequin's Nocturne line - which is described as dark, sensuous and dangerous - where paranormal and normal collide.

This book definitely does that.

First, how gorgeous is this cover? I'm sure you realize by now that I love a good cover and this one was beautiful.

When I picked up Siren's Secret - actually I got it for free from someone who won it from Debbie herself but already had their own copy - I thought this was going to be a fun, light read. Its about mermaids! I love mermaids but I find it rare that you see someone go truly into their dark side. Actually, I have a hard time finding books about mermaids for adults period.

Needless to say I was excited and when I opened it up, a fun light read was not what I got. It was better.

Debbie Herbert not only brings out the darker drives of mermaids but she takes you deep into the mind of a serial killer. Its easy to have a villain to hate but she actually makes you feel a little bit sorry for this guy. Not enough that I thought he shouldn't be punished but you kind of understood where he was coming from.

She captures life in the Alabama Bayou wonderfully. I have to say that I'm really hoping Jet gets her own book soon because she was probably my favorite character in the book.

This is a great debut novel and definitely wets my appetite for more which is why its under appetizers. I was very excited to find out that this is, in fact, the beginning of a series produced with Harlequin called Dark Seas. So be on the look out for book two, Siren's Treasure which is still in the works. It sounds like its going to be Jet's book. I'm really, really hoping it is. ;)

If you're looking for something a dark, something with mermaids, and something set in a small Bayou town, this is the book for you. Check it out. I enjoyed it.

I did enjoy READING it more this time as I found the narrators voice slightly annoying, without a wide rang so it kept bringing me out of the story.

I love anything mermaids but honestly I couldn’t get past chapter 2. I couldn’t stay focused on it.

The story line was great but the readers breathing was a little distracting. I would recommend it.

Something’s Fishy In The Bayou

I have to say, mermaid stories are one of my favorites. This one doesn’t disappoint. I have both the ebook and also listened to the audiobook some. The only thing negative I have to say is that I wasn’t crazy about the narrator, but the book was good enough that I wanted to keep on listening. There was so much suspense. The bad guy was so much fun to hate. What a clever idea to write a serial killer into a mermaid story. The characters are so well developed. I can’t wait to dig into Jet and Lily’s story. At first I wasn’t sure about Jet but now she’s turning out to be my favorite. And omgosh! Never in my life did I expect the development that came about at the end! I was like WHHAATTT! This didn’t end in a cliffhanger by any means but I can’t wait to see what happens with this little tidbit.

So. Mermaids. Yes, I am shallow enough that a story having mermaids is enough to entice me to want to read the book (or listen in this case). But it was so worth it. This is a fairly engaging story.

I didn't particularly care for the bad guy in this book. Or the type of dog he had (which hits my max height requirement for calling them yappy ankle biters). But regardless of my feelings towards the dog, I still didn't like the whole near end of having to rescue the dog.

I ADORED Eddie and how well Shelly and Tillman interacted with him.

Eddie wasn't shown as being the bad guy just because his brain works differently than the 'norm'. Which is fantastic to see. Seeing positive or neutral relatable characters in media makes you feel a little less alone in the world. Or at least it does for me and most of the autistic people I know.

I also like the growth from Tillman and Eddie's mother. How she goes from useless jerk to learning and growing up and being a responsible adult.

Overall, this was a pretty good story and if you like mermaids and portrayals of mermaids as things other than just pretty half human half fish people, you'll probably enjoy this story.

Where does Siren's Secret rank among all the audiobooks you’ve listened to so far?

thus was among the best I have listened to

love among the waves

this book was very different and I found I could not stop listening. The author was fantastic with bringing this to life. She had every element sex love and suspense twist and turns I LOVED this book . looking forward ton the next