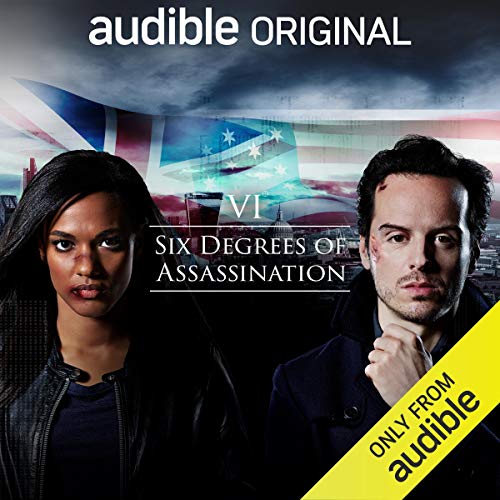 What listeners say about Six Degrees of Assassination

this is a format based on the old radio drama (multi cast, sound effects, etc) and it's amazing! I highly recommend.

Very well done. The cast did a wonderful job. Looking for more Audible like this.

Just so damn good. I want more of this world lol. Dont just leave it

As long as you look past an international relations situation that would NEVER happen this is an excellent story performed extremely well by a great cast.

I very much enjoyed this audiobook and will look for other works by the author.

Poor performances makes me think the direction was rushed. Too many lines delivered like lines and phoned in sincerity. Bland, middle of the road mystery.

actors were great and the story was amazing. looking forward to downloading more of these.

Story was good, performance was better. You will enjoy. Lots to digest and story has lots of turns.

all of the actors were spot on. Quite the cliff hangers and twists and turns.

To be fair, I did not listen to this series in entirety. Boring and cliched.

Just like the old radio shows with a modern flair.

Really enjoyed this fast paced political thriller. Its quite fun to hear the sound effects

You had me at Andrew Scott

He's such an excellent actor, and now I know he is a wonderful voice actor as well. The man just totally commits. Check his portrayal of Moriarty in "Sherlock", along side Benedict Cumberbatch. 6 Degrees of Assassination is an above-average political thriller, well worth a listen.

I would’ve liked each story to roll into the other meaning watch one episode was complete it would automatically played the next episode. However there were two whole minutes of credits and music at the end that was not necessary… It made it like it was a television show and not a book.

Now to the story, the story read well, It had a nice flow and kept me intrigued. There are 10 episodes and each episode was about 28 minutes long. I listen to this series to and from work and completed it at home as I could not put it down. I really wanted to know what happened; it had a nice Plot twist. However I wish the characters were developed a bit more. Each individuals backstory seemed very shallow. Listening to this book was like taking a 28 minutes or a 45 minute break from my monotonous day to ride in the twisties (Motorcycle reference ) or immerse myself into something different, yet very enjoyable.

I love anything MI5 or MI6 related, but I chose this because of Andrew Scott. The story was winding enough to keep my interest, and I was surprised at the end. I listened while I cleaned my house! It made the work fly by!

British Crime Show in my Ears

Easy listen, interesting enough, I always think I'm smart enough to figure out who the culprit is, but I guess not. It kept me guessing until the end. Also, Andrew Scott could read a car manual and I'd be in rapture.

I loved this show, I couldn't stop listening! Fantastic in all aspects. Please make the next one asap.

What's not to like...this podcast had everything from brilliant actors, to suspense, drama, & action. I didn't know if I would like it, but I've never seen Andrew Scott portray a role, that I didn't like, so I took a chance. Beyond worth it. I'm definitely at a loss to say what a phenomenal production this actually was. I look forward to many more classy audible books such as this one. Top drawer. Well worth a credit or a listen, if you have an Audible membership.

Andrew Scott (Sherlock) Freema Agyeman (Dr. Who) Clare Grogan (Red Dwarf) - this cast is a Who’s Who of favorites from BBC productions. With a cast like this one, the plot is almost superfluous. Almost. ;-)

Luckily, this episodic thriller delivers both a superb cast, and a well paced thriller and mystery.

I suspected the final culprit, but I missed the motive. That’s all I’m going to say, because I’d hate to spoil it for anyone.

If you like espionage or political thrillers, this is a *must listen.*

W-why is it out of order

What? How can that even happen…..random words to fill space screw your fifteen words

A movie for your ears!!

Amazing acting, sound quality and story line!! This couldn’t be better- totally professional quality! I listened to the entire season back to back- couldn’t stop it was so entertaining! Great job!!!!