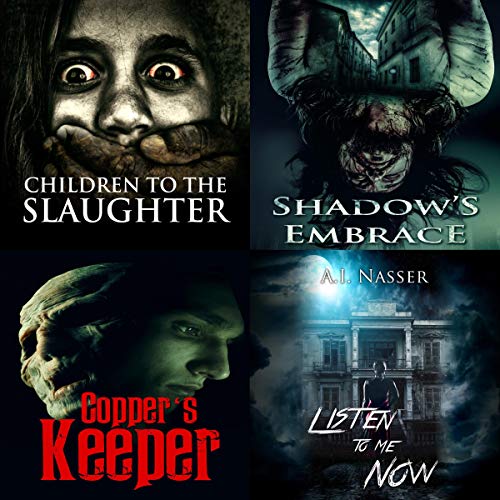 Written by: A. I. Nasser,Scare Street
Narrated by: Jake Urry
Try for $0.00

In the small town of Melington, there is an evil lurking in the darkness, and no child is safe....

This collection contains all three books from the best-selling Slaughter series by A.I. Nasser. Listen with the lights on.

Children to the Slaughter: After a 20-year absence, Alan Carter returns to his hometown to uncover the truth behind his sister’s and other children’s disappearances. Together with his childhood friend, he must stop the curse that has haunted Melington for generations.

Shadow’s Embrace: Six months after waking up from a coma, Alan Carter is plagued by nightmares. Children continue to disappear, with the monster taking them still roaming free. And Alan has visions of darkness, corridors lined with doors, and a woman in red who tells him he cannot leave.

Copper’s Keeper: Children outside Melington start disappearing; the town is in the middle of an FBI investigation. And Alan Carter knows Copper Tibet is more powerful than ever. Will Alan be able to defeat this evil and stop the curse?

And with this edition comes the bonus novel, Listen to Me Now.

Listen to Me Now: After the success of his first novel, John Kirk has struggled to come up with a new story. As a gruesome story begins to take form in his mind, the lines between fiction and reality become blurred, and something sinister emerges from the shadows, demanding to be heard....

I have to say I enjoyed this series more than I expected. All aspects of it are well done, including the narration. The plot line is intriguing and creepy and the narrator's voice, a morbidly appropriate bonus. Definitely a must for all my fellow ghouls out there.

The Slaughter Series is about Alan Carter. He witnessed his sisters disappearance when he was young but no one believed him. All he could say was a hand reached out and took her. His family eventually left the town but 20 years later and Alan returned. While Melington has changed since he left, kids are still disappearing and Alan is determined to get to the bottom of it and stop it.

This was such a creepy read. It's definitely horror, but a tame horror with a lot of mystery thrown in. The plot takes a while to fully come together but when it does it was awesome. It was well written and developed, and the pacing was perfect, but the best bit for me was the mystery and trying to figure out what was happening and why.

The cast of characters were varied, but all were well written and developed. Alan and Deborah are old friends and I liked both of them. The members of the council are mostly mysterious and I loved finding out about them and their secrets. Copper was such a scary and creepy villain and I loved reading about him too.

In all, this was a creepy read. It's a slow burner but well worth the effort because it was so good!!

Jake Urry is exceptional as always. He can bring a creepy atmosphere to life like no other. I think his voice was the reason I enjoyed this so much because he was able to bring chills to my spine!!

In the bonus Listen to me Now, John Krik had a very successful first novel but has been struggling to come up with something since, so his editor tells him to go stay at a house he owns in Cafeville by himself and hopefully get some inspiration. He agrees to spend 6 months there, leaving his wife and son at home, and see what he can write. But the house in Cafeville has some secrets and John is about to find some of them out.

I loved this!! I was a little worried on starting it because a lot of the reviews say that it's confusing, but I was captivated by the story and absolutely loved it. As with a lot of this authors' previous books, this is a slow burner and needs to be savoured to fully enjoy it.

It does take the plot a while to get going, but I found that it just amped up the tension for me. Seeing John and how the lines between reality and the book were blurring for him, and the change in him just made it more suspenseful and the anticipation made me listen to this in one sitting!! When his wife comes to stay with him, it really started getting creepy and I was on the edge of my seat to see what would happen!!

In all, this was awesome and I'm glad I went into it with an open mind because I thoroughly enjoyed this. I liked the characters, I liked the setting and I really liked the story.

Once again, Jake Urry proves himself as a masterful narrator. His voice can really capture a creepy atmosphere and his performance made this book all the more better. He has an amazing array of voices and tones and I highly recommend you check out his work.

I was given this audiobook at my request and have voluntarily left this review. This in no way affected nor influenced my thoughts.

I enjoyed this series, it was my first time listening/reading anything written by A. I. Nasser and I will read more! This series is about a small town where secrets from the past (and present) involving a wrongly accused man whos spirit (for lack of a better word) causes the founding families to, as the title of the first book suggests, lead children to be 'slaughtered'. One of the main characters in the series, Alan Carter returns to the town 20 years after he watched his sister get taken by a creature. He seeks for answers for all the disappearances over the years. With the help of his childhood friend they learn a lot about what is going on in the town. In the end the series is about what someone might be willing to do to keep loved ones safe. Everything gets tied up nicely at the end, I only wish we could have seen a little more about Alan's situation at the end and maybe more details about how the girls moved forward. (Trying not to give anything away!)

The bonus novel was a good listen as well, has an Amittyville horror house feel to it where things just aren't quite right. Rats in the attic and rotten smell from the basement, voices telling you to do things that normally you wouldn't think of! The only negative thing I have to say about Listen To Me Now is that every so often when the narrator would say John's name, to me it sounded like he was saying Joan and I got momentarily confused. It was only occasionally and just that name, maybe it was an accent thing. Would definitely recommend the red/listen to though! Check it out :)

Wow! Where to begin? I loved the writer's take on the boogie man. The closet brought that urban legend to mind. This story also reminded me of the witch trials of history. This story was so much fun to listen to. The narrator read the story so perfectly that I would hear his voice in my head after each reading session. The bonus story was also good. In whole this complete series was creepy and entertaining. I look forward to reading more from this author.

The series was okay. It annoyed me when he identified women by their hair color all the time.

Listen to me now review

This was a excellent book . It kept you guessing. I loved it and would highly recommend this book

Understand I’m a bit biased, I want a story that is action action action and cannot stand character building in stories. The first story to me had too much character building and not enough action especially when it started out so strong, and then it fizzled for me. The title of the book is misleading, I thought it would be a slasher kill em all in horrible ways book, but its not. The series is about a man that is wrongfully accused and killed in the 1800s by mob justice, but he curses the town and the books are about his vengeance. It was a good story and I would recommend it. Delete the “bonus scene chapter whatever” and just include it in the book. Also both stories just end leaving the story hanging. I liked the stories, but there’s no ending to them.

Another truly great horror series from Scare Street. These stories are well written and suitable for all horror fans. Great narration as well.

on the fence about this one

writer referred to the women characters by their hair color...annoying and a bit condescending...things like this don't usually bother me but it's like they thought we were too stupid to keep the main female characters straight

another series I liked, thank you scare street! The children are the victims in these stories but the founding families are responsible for it all!

Listen to me now was an unexpected gem, thanks for writing it.

I did enjoy these books. Was surprised that the 4th book was totally different book. Not part of the others at all. But it was a very good story. The first 3 books was a good thriller story. You definitely need to hear all three. The 4th one was a Haunted House kind of story. Good story. The bonus chapters at the end explained some things in the story.