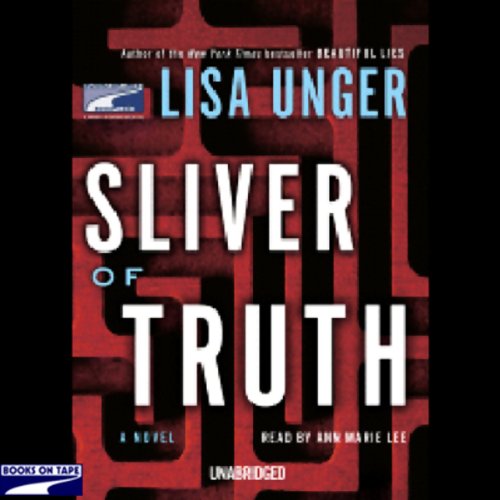 Ridley Jones is being careful about where she steps and trying to get on with her life when a seemingly mundane act - picking up a few envelopes of prints at a photo lab - puts her at the nexus of a global network of crime.

A shadowy figure of a man appears in almost every picture she’s taken in the last year, lurking just far enough away to make identification impossible. Now the FBI is at her door, some serious bad guys are following her every move, and the family she once loved and relied on is more distant than ever. The only thing Ridley knows for sure is that she has to get to the truth about herself and her past if she’s ever going to find her way home.

Charged with relentless intensity and kinetic action, playing out with unnerving suspense on the streets of New York and London, and seen through the terrified but determined eyes of a young woman whose body and heart are pushed to the point of shattering, Sliver of Truth is another triumph from the New York Times best-selling author of Beautiful Lies.

"Best-seller Unger's sensational second thriller...puts her in the same league as such genre masters as Peter Straub and Peter Abrahams...Unger grabs the reader by the throat and doesn't let go....Unger's gifts for dialogue and pacing set this far above the standard novel of suspense and will leave many anxiously awaiting her third book." (Publishers Weekly)

What listeners say about Sliver of Truth

Dont buy this book before reading Beautiful Lies. It will make little or no sense (hence the negative reviews from the other readers) It does follow on from where Beautiful Lies left off, which helped tie up a lot of loose ends and provided a perfect opening for a whole new twist to the story. The second book is not as well written as the first but I was so wound up in the plot that I didn't mind too much. It IS fiction; very much so. But that is the appeal of this book. The idea that nothing and noone is what they seem keeps you hanging on to the very end. If you are looking for believable, go buy an autobiography instead. The pre-requisite for this story is a little imagination.

A complete waste of time. The plot is disjointed and not believable and I never felt one iota of connection to any of the characters.

a little hard to swallow at times. it is really necessary to have read the previous book, (beautiful lies) to understand the thread of the story in this one. it was good to have some closure as the previous books conclusion was open ended.

This story could be a good one, but it is all related by one person telling what has happend in the past, and not in an organized manner. I have listed to 2 hours and now I give up. I prefer stories with action and characters interacting with one another rather than having the main character only tell you about everyone else in a haphazard way.

a well written story!!! keeps you interested till the end
Thank you for the narration too

Would you try another book from Lisa Unger and/or Ann Marie Lee?

I wouldn't listen to another Lisa Unger book, or one narrated by Ann Marie Lee.

What could Lisa Unger have done to make this a more enjoyable book for you?

Story was somewhat hard to follow, slow moving, and seemed to rehash what was covered in her first Ridley Jones book. I kept waiting for new material, and when some came, it was confusing to the story line.

Would you be willing to try another one of Ann Marie Lee’s performances?

Although Ann Marie Lee's narration was very clear, her voice and narration style was just irritating to me. However, maybe the script was more to blame.

"Beautiful Lie" was farfetched. "Sliver of Truth" holds just a "sliver" of interest. The plot was weak, and unbelievable at best. That said, Ridley is such a spoiled brat, I could hardly listen to the entire book. I am now giving up on Lisa Unger.