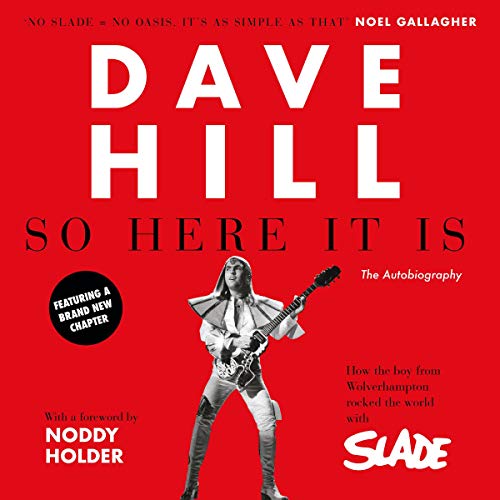 So Here It Is

No Slade = No Oasis. It’s as devastating and as simple as that. Noel Gallagher Slade’s music and style dominated and defined the 1970s. With six consecutive number one singles, they were the UK’s number one group and sold millions of records all over the world. At their peak, Slade enjoyed success and adulation not seen since The Beatles.

Now, for the first time, the man whose outlandish costumes, glittering make-up, and unmistakable hairstyle made Slade the definitive act of glam rock tells his story. Growing up in a council house in 1950s Wolverhampton, Dave always knew he wanted to be a musician, and in the mid-sixties, with Don Powell, he founded the band that in 1970 would settle on the name Slade.

Their powerful guitar-driven anthems formed the soundtrack for a whole generation, and their Top of the Pops performances, led by their flamboyant, ever-smiling lead guitarist, became legendary. But So Here It Is reveals that there’s much more to Dave’s life than Top of the Pops and good times.

The book uncovers surprising family secrets, tells the inside story of the original band’s painful break-up, explores Dave’s battles with depression, his decision to reform Slade and go back on the road, and his recovery from the stroke that threatened to cut short his career.

Told with great heart and humor, So Here It Is is the story of the irresistible rise of Dave Hill and the definitive account of his journey from working-class lad to global rock star.

What listeners say about So Here It Is

How nice to learn the backstory to Slade’s origins and future success. The rock ‘n’ roll industry would not be complete without Slade.