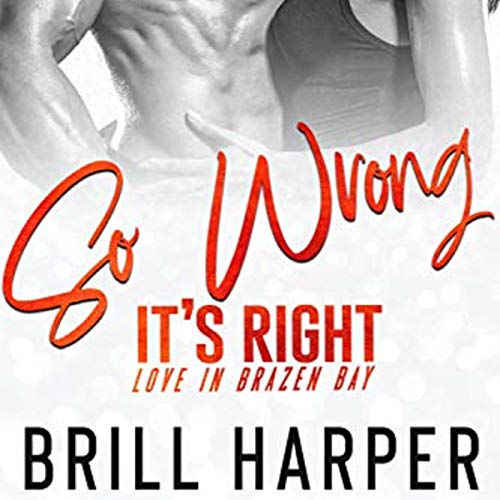 So Wrong It's Right

Written by: Brill Harper
Narrated by: Jenny Nordbak
Try for $0.00

What would you do if the boyfriend you totally made up to get your sister off your back showed up at your place of employment?

Free-spirited Stella Stone has always been the wild child in her family, but even she is surprised at the amount of trouble she's found herself in this time.

Christopher Lockwood was a random name she chose from the internet. How was she supposed to know he would end taking a temporary position in the veterinary office she manages? Now she somehow has to keep the uptight, tie-wearing, self-contained Christopher from figuring out that the whole town thinks they are dating, and somehow also keep the whole town from figuring out she's a pathetic liar with a fake boyfriend.

Oh, and it doesn't help that he's a major hottie under those Clark Kent glasses and stern demeanor. In fact, something about his need for control brings out Stella's inner brat, especially when he decides she needs a little discipline.

Too bad there's no such thing as a secret in Brazen Bay. Not for very long.

Author's confession: This is the most opposite-y opposites attract book ever with added fake relationship crack. Stella is a fan favorite and Christopher is the alpha nerd hero you didn't know you needed in your life. You are going to love the surprisingly dirty dude under the restrained and inhibited mask he shows the world. I mean unf, am I right? He's the only one who could keep up with our deliciously nutty Stella and give her a worthy HEA.

*Previously published but no longer available by Brill under a different pen name with expanded content and new characters.

What listeners say about So Wrong It's Right

The Title "So Wrong It's Right" Totally Fits!

I love the Love in Brazen Bay series. Stella and Christopher were total opposites - he was a conservative beige wearing vet from the big city and she was a loud dresser with an apartment to match from a small town. Each day, her coffee cup matched her dress. The two of them were so adorable and they worked. This book was also seriously hot, especially as they realize each one loves the other. Also, just because the vet was conservative didn't mean he did not know his way around the female body. It was a pleasure listening to this book.

Jenny Nordbak was great in narrating this book. I received this free copy audiobook at my request and have voluntarily left this review.

I came for the narrator and got drawn into the story. Brill is a new to me author, but I’ve listened to Jenny Nordbak’s podcast forever! I loved the story of buttoned up Christopher and shiny Stella.
But the winner for me was listening to this great story delivered by the smoky voice of Jenny Nordbak. I swear, she sounds to me like how good scotch tastes. She didn’t try to create insanely different tones for each character, which took me a while to get an ear for, but worked so well. I usually get irritated by the chosen pitch for a female or male character halfway through an audio book, this one was perfect.
Oh please pair up for the next book!!

This book was so much fun. The story was sweet and sexy and the narrator’s performance was spot on.

This is short, sweet, and dirty. And the narrator’s voice was sheer perfection. The voice really clinched the story for me

My Favorite so far!!

This is definitely my favorite book of the series so far. Absolutely loved it! Hot, sexy, sweet, opposites attract with a HEA! Oh I almost forgot to mention that it had me crying with joy and laughing!! ♥️

I enjoyed listening to this story immensely, the hero and heroine were adorable, the narration was wonderful and the story was a fun fake boyfriend story, both lighthearted and super steamy, I highly recommend listening to this audiobook.

These are the best quick stories. Filled with sass, humor, and OTT Alphas who definitely keep it entertained.

Nothing like an audio book to remind you how much you enjoy romances. This was cute, fun, hot, and squeal worthy. Jenny Nordbak's voice is amazing!