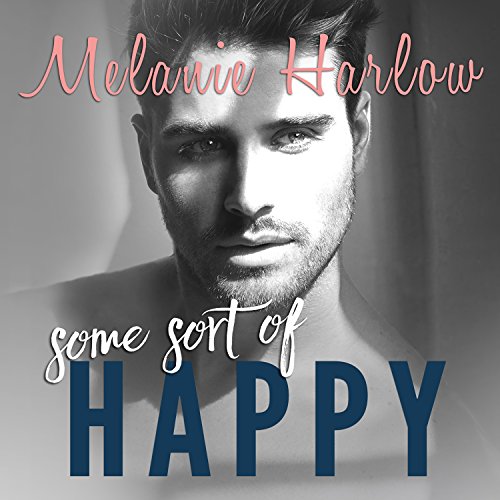 Some Sort of Happy

I almost didn't believe it was him. In high school, Sebastian Pryce had been an aloof outsider who kept to himself. But now, 10 years later, he's back and unusually attractive. With muscles in all the right places and hands that know exactly what they're doing, Sebastian is everything I didn't know I needed. And while he isn't exactly friendly, he has a magnetism that draws me in.

He pulls away, afraid he'll break me. Until the night I demand more - and he gives it. (Hard and deep. Twice.) Are we just two lost, lonely people seeking solace? Or could a disgraced reality TV star and a flawed, frustrating man actually find some sort of happy together?

" Some Sort of Happy is all kinds of amazing, sexy, and romantic." (Lauren Blakely, author of The Sapphire Affair)

What listeners say about Some Sort of Happy

I WAS TRANSFIXED FROM THE MOMENT THEY MET

This isn't the type of book I usually go for.... but WOW it absolutely blew me away in oh so many ways. The handsome Hero Sabastian suffers from OCD and has probably been that way since a childhood drama happened when he was just 8 years old. He was skinny, strange, obsessive and was called names, bullied and made fun of during his High School years and he eventually moved to NYC and became a Lawyer to try to overcome and fit in when he was older. But relationships proved hard when you have to check things over and over again, when you have mood swings or when you have to do things in 8's or in even numbers. So now Sebastian has moved back to his Hometown for peace, tranquility and to try to get control of his life.... and to stay away from people. However, the feelings Sebastian brought out in me as I listened to his story was how vulnerable, shy, misunderstood and loveable he was and I just wanted to give him a great big hug...... but that will prove to be Skylar's job.

Beautiful Skylar was the popular girl in School, made friends easily and moved to NYC with dreams of becoming a famous Actress - but the only thing she achieved was being labelled as 'the bitch' on a reality dating show. The Producers wanted her to act that way and clever editing did the rest which had her trashing her Hometown and its residents in order to boost ratings. So now, with not much to show for her years trying to make it big, the only thing left is for her to go home.... but the Town's residents aren't at all understanding, sympathetic or forgiving.

One day, when it all proved too much, she laid down on a deserted beach, wept and let it all out - but when she pulled herself together there was a handsome sexy stranger, with a a body to die for, just staring at her - straight faced and tongue tied. They didn't get off to a great start because nervous Sebastian had secretly yearned and lusted over Skylar since their High School days and now he just can't overcome the negative voices in his head. And this starts off one of the sweetest and most touching love stories I've listened to because these two wounded souls find each other, help one another and learn, through a bit of trial and error, to trust, to overcome..... and to love.

It wasn't all smooth sailing though, there was a lot of give and take as Skylar slowly had to understand the depths, moods and triggers to Sebastian's OCD and Sebastian learnt to share his thoughts and to trust Skylar unconditionally but this was done through a bit of conflict and angst. So there was a lot of character growth and it was also a fun, romantic, passionate, tender and touching love story as they went from tentative friends to red hot lovers and, in the bedroom (or wherever!!), boy did Sebastian's Alpha side come out to play. Dual POV's, a romance driven story that was emotional, hot, had a few noteable secondary characters and the narrators did a fantastic job breathing life into two loveable main characters who worked hard for, achieved and very much deserved their HEA ending.

Worth a credit? Yes, it was nothing like I had expected... but it actually surpassed all expectations by delivering so much more and it left me craving to hear even more about these two wonderful characters whose struggles to find happiness entertained, amused and pulled at my heartstrings.

Melanie Harlow weaves the seriousness of coping with OCD expertly into this wonderful, steamy hot romance between former reality star you-love-to-hate small town girl Sky and man who has crushed on her from afar since High School, Sebastian. I adore the deep family bonds Sky has with her sisters -there is nothing they don't share and it's hilarious! The readers did a fabulous job, particularly with Sebastian's difficult internal voices and mind chatter as he struggles to overcome his disorder. Sky is in a state of limbo in her life, trying to find her way, but has a great strength that makes her admirable. Harlow fan for life.

As someone who has been married to a man with OCD for ten years, I have to give the author a lot of credit for either researching OCD very thoroughly, or for living with it or being close to someone who has it. I went into this book not knowing it portrayed a character with OCD, and was shaken a few times by how accurate it is ... the struggles, the drastic mood swings, the intrusive thoughts, the rituals, the way a loving partner gently pushes back and says, "No, you don't need to do/say/count that again." The characterization of the man with OCD was a pleasure to read, and I found myself wishing my husband was as open about his struggles as Sebastian was. Kudos to the author for jumping in with both feet and making a flawed human being likable and worth getting to know. This turned into much more than a fluffy, sexy read, which was a surprise.

Absolutely loved Sebastian and Skylar's story! Sebastian is one of a kind - sexy, sweet, quirky but adorable! You'll love it!

It was a hard listen.

I liked the book but it was so sad I was happy when it was over. Hell it had me up and down as much as he was. Worth a listen

This book made me immediately go purchase the other two books in the series before I'd even finished it. I loved nearly every aspect of the story, and I was surprised by that because it took me a minute--maybe about 30 minutes to really get into it--honestly. After that, I was hooked on every word, thought, and action of these incredible characters. I love a good romance, and over the top characters and situations, but, I absolutely ADORE a story where the author creates characters that are flawed, unsure of themselves and how to navigate love, life, whatever, and still find a way to find acceptance, love & happiness. This is that book, 100%, and I highly recommend it.

I Need a Bandaid

What made the experience of listening to Some Sort of Happy the most enjoyable?

The author's ability to get so deep into the mind of Sebastian that I felt like an ant on his wall at home made this book unforgettable. I would have to say enjoyable was the wrong word because my heart continuously broke for him and his struggle, but I also cheered for him and reveled in his big and small victories.

What was one of the most memorable moments of Some Sort of Happy?

I love her new employer's reaction when Skylar approaches her, admitting her reason for being shunned by her town.

What about Nelson Hobbs and Lucy Malone ’s performance did you like?

I loved Nelson Hobbs performance because I felt so connected to Sebastian due to Melanie's writing. His delivery was perfect. I felt much the same about Lucy Malone talent. Both of them drew me in deep and made it hard to let go of this story long after it was over.

There were many moments that moved me in this book, but I would have to say that most of them surrounded Sebastian and his struggle to get out of his head and overcome the fear that was keeping him paralyzed. I would have to say the first time he talked to her on purpose in the coffee shop. It was endearing and gave me great hope for a beautiful story. I wasn't disappointed either.

Ok, so the storyline started out good. I loved Sebastian and always like when authors write about real issues so many people go through everyday. OCD is real and can really affect the lives of not only the people suffering from it but also those around them. However, throughout the entire book, I kept waiting for the big climax (no pun intended) but it never came. When the word "Epilogue" came, I just starred at my phone in confusion. "Wait, that was it? Seriously?" So, would I recommend this book? Not really unless you're just looking for a quick and easy read (well, listen) to fill your time. As for me, I don't think I'll move on to the next book in this series.

Perfection is not needed for happiness

I swore I read this book a few years ago, but after listening, I think maybe I read one of the other sister's books. Skylar feels like a failure after retreating to her hometown (and her parent's guest house) after a humiliating reality show in her attempt to make it somewhere with her acting hopes. Sebastian is a man suffering. He has OCD. He is trying to keep it under control. And Skylar has been the object of his desire since school. When they run into each other in her sister's coffee shop, a new path is made for both of them. There are bumps in the road but in the end, they make each other happy and make adjustments for each others foibles. I knew I'd love the story. Small town, second chance (for each of their futures), and dealing with mental illness. I loved Sebastian. And Skylar isn't just a pretty girl who didn't take the world by storm. She isn't purely selfish. Very enjoyable.

Interesting study of someone suffering with OCD, depression and anxiety.

The love story was sweet and hot. The voice acting was excellent.