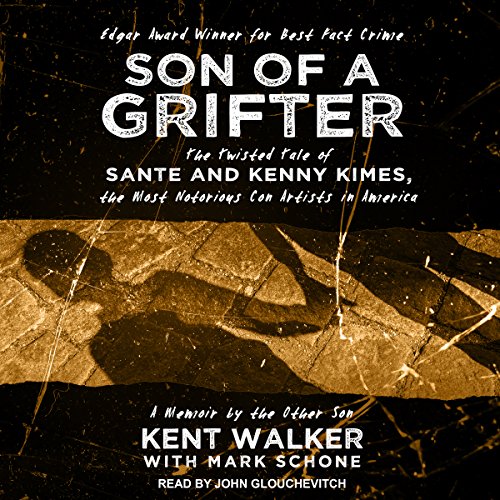 Son of a Grifter

The Twisted Tale of Sante and Kenny Kimes, the Most Notorious Con Artists in America: A Memoir by the Other Son
Written by: Kent Walker, Mark Schone
Narrated by: John Glouchevitch
Length: 16 hrs and 39 mins
Categories: Biographies & Memoirs, True Crime
2 out of 5 stars 2.0 (1 rating)

Son of a Grifter

In 1988 a troubled young man and his flamboyant mother were arrested for murdering a wealthy widow in her New York City mansion. Suddenly America was transfixed by a pair of real-life film noir characters. The media couldn't get enough of the twisted relationship between Sante Kimes and her 23-year-old son, Kenny. But the most chilling story of all was never told - until now.

Kent Walker, Sante's elder son, reveals how he survived 40 years of "the Dragon Lady's" very special brand of motherly love and still managed to get away. As a child Kent watched his mother destroy his hardworking father, Ed Walker, and then - with Kent's painful collusion - snare what Sante called "my millionaire". When she married seemingly respectable real-estate developer Ken Kimes, it was a match made in hell. For the next two decades, Kent's mother and stepfather indulged in a globetrotting orgy of criminal behavior, laying waste to each other and anyone who got in the way. When Kent's half brother, Kenny, was born, Kent was 12 years old - old enough to know that he was his younger sibling's only protector.

"Well researched and touching.... As a chronicle of Sante Kimes's life, it's unlikely to be surpassed by any other." ( Publishers Weekly)

What listeners say about Son of a Grifter

I know this great story well from other media

I found it tedious and boring and started fast forwarding through the stories.
I dislike when narrators use alternate voices fot characters.

If you could sum up Son of a Grifter in three words, what would they be?

That the step father Ken Kimes was so underestimated in his role and influence.

What does John Glouchevitch bring to the story that you wouldn’t experience if you just read the book?

If you could give Son of a Grifter a new subtitle, what would it be?

Myself, and I'm sure many readers, have crossed paths or have been situated with sociopathic and narcissistic personalities. Sometimes people are afflicted with both in addition to having a sadistic personality disorder. I have had to deal with family members that have all three. I understand the constant distress these people bring to the table. The damage they can do. The silent ones and the loud ones. It is a lot to work through when the damage is done. The recounting of these stories was very well laid out to bring the insanity to the table so the reader can understand. Kent Walker had a lot of innate personal integrity rise above the conditions he found himself in.

CON PEOPLE AT THEIR WORST!

YES. IT IS SUCH A PREPOSTEROUS STORY. YET IT IS TRUE. SANTE KIMES WAS A FLAWED PERSON. SHE LEFT CHAOS EVERYWHERE SHE WENT. SHE HAD NO IDEA OF WHAT HAVING MORALS WAS EVEN ABOUT. IT MOVES FROM ONE INCIDENT TO THE NEXT. KEEPS YOU INTERESTED.

What other book might you compare Son of a Grifter to and why?

WHEN SANTE GOT HER JUST DESERT.

I HAD BEEN WAITING FOR THIS BOOK. I READ IT PHYSICALLY A LONG TIME AGO. I CAN'T READ ANYMORE AND I WAS HAPPY WHEN IT WAS AVAILABLE AUDIBLY

It disgusted me but I couldn't put it down

It is the kind of story that you keep reading because you can't imagine what your reading could be true. So many times I wanted to put the book down because of how ... just broken all the characters were (including the author) and how disgusted I was by their thoughts and actions.

What was one of the most memorable moments of Son of a Grifter?

For me there wasn't just one... the life of Shante Kines was one of the most memorable I have ever encountered in the pages of a non-fiction book.

What does John Glouchevitch bring to the story that you wouldn’t experience if you just read the book?

I liked that the narrator sounded like a surfer dude which kind of supported my mental picture of the author. He also managed to provide different character voices without going over the top. Also, I LOVED that he either knew how to say or learned to correctly say names of locations etc.

Besides the true crime aspect, I really appreciated watching to author develop (to where he was when he finished writing the book). I feel like I shared a little of his journey with him.

Where does Son of a Grifter rank among all the audiobooks you’ve listened to so far?

This is in my top 10. I have listened to hundreds of audible books over the last 12 years. The story is a bit personal to me as my mom displays some of the characteristics of Sante Kimes and a lot of the story takes place near where I grew up in Orange County. Additionally, both Kenny Kimes and I went to UC Santa Barbara. He was there a few years after I graduated though.

What other book might you compare Son of a Grifter to and why?

Maybe confessions of a Cartel Hitman or The New Confessions of an Economic Hitman. However, this one is much more complex as there are very few people like Sante Kimes in this world. Some lie and cheat, but she is the gold medal winner if there was ever a competition.

A few laughs here and there. Maybe a little anger. No tears though

I highly recommend this book. In some respects it's hard to believe how much of a psychopath that Sante Kimes was. However, I know a few people like her (but not at her level) and I see the potential for evil in these people.

Just a note that the book assumes that the reader has some awareness of the publicity around the murder of Irene Silverman by the author's mother Sante Kimes and the author's half-brother, her younger son Kenny Kimes. If not, I suggest a brief review of an article or two before reading the book. The earlier part of the book has several indirect references to what many readers are likely to already know from public media about the Kimes family saga, long before the author explains those events in his narrative.

This book is not really about crime, rather it is an autobiographical reflection on growing up under the thumb of a sociopathic mother who dominated the family, including a narcissistic but weak father. Actually, two weak fathers, the author's bio-father Edward Walker and stepfather Ken Kimes.

And it's not really about the flamboyant, outrageous, destructive mother as much as it is a tale of two brothers raised by the same people, one brother growing up to live a normal, middle-class life, and the other brother who became his mother's evil henchman and thrall. The oldest brother (the author) who rejected their mother's demands and is now a regular working stiff like the rest of us, and the other brother who is serving life without parole for two murders, having confessed to at least one other, all done at the behest of their mother.

The book put this reader into the family dynamic well enough to grasp at least some understanding of why events rolled forward as they did.

The narration by John Glouchevitch is superb. It is listenable and reflective of the author's tone. Near the end of the book the narrator perfectly captures the essence of Sante Kimes herself rambling endlessly to her son about her own twisted perceptions of life and reality.

Of course the book is Kent Walker's personal perspective on his family more than it is an objectively factual recounting, but nonetheless it is insightful. I am sure his stepfather Ken Kimes' own family, especially his adult children from his first marriage ("the creeps" per Sante Kimes), would have many objections to some of the material. Their view of the family history, and of their father, is not included. It would also be difficult for even a family member to ever know the full truth about characters as devious and conniving as Sante Kimes and her youngest son Kenny. This is Kent's own story, and there will always be personal biases in any autobiography.

If you have been interested in the sensational media accounts of the Kimes, including the movie "Like Mother, Like Son: The Strange Story of Sante and Kenny Kimes", this book gives a more complete picture of Sante and Kenny, and their life history before and after the Silverman murder.

The book was clearly published while Sante Kimes was still alive as it does not mention her death in prison in 2014 at the age of 79. Kenny Kimes is today in prison in California serving life without parole. It is truly 'life', as he is now 43 years old, having entered prison at age 25.

I cannot say enough and I won't say much because I don't want to give it away but I LOVED this book.

This had to be hard to tell. Dysfunctional family is an understatement and while step father, mother and step brother decided to turn bad, the author is the victor of his life deciding to live an acceptable life instead of a life of crime although he laments not having a normal loving family. Very well told, didn't want to stop listening.

Pretty solid listen here if you like true crime. It did drag in some spots but overall it was interesting to visualize what this author went through growing up. Worth the credit and if you like long books (I’m a commuter to work) it’s worth the credit

Good story that drags on at times

I remember watching a TV movie about this case that featured Mary Tyler Moore and it was quite fascinating. The book makes for a good listen, though there were times when it became a bit tiring, but I did manage to finish it and I do recommend it for its candid portrayal of how this particular matriarch manipulated the lives of those around her.

The narrator did a pretty good job capturing characters and emotion. Im pretty much an audiobook junkie and this is the first time Ive ever heard him narrate a book.

What an amazing story. I feel like I've been on a roller coaster. It almost doesn't seem real!