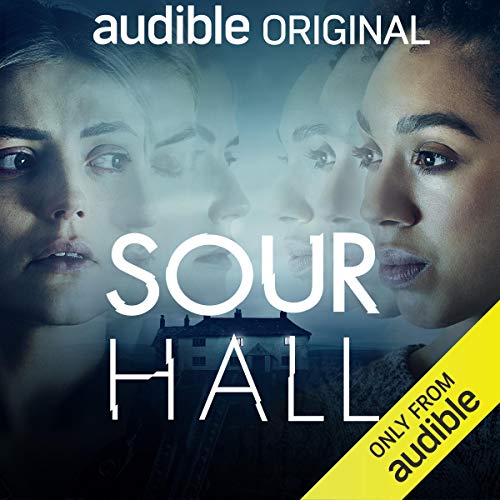 Written by: Laura Kirwan-Ashman
Try for $0.00

Listen to Sour Hall from 25th January, with a new episode releasing daily.

When George inherits her family farm it’s supposed to be a new start for her and her partner Ash, an escape from the chaotic pace of Manchester life and the traumatic incident that’s casting a shadow over their relationship.

George embraces country living and a burgeoning dairy business but a lonely Ash can’t settle – the farm is isolated and the villagers’ stares make clear their feelings about the inter-racial lesbian couple in their midst.

And then there is the strange banging coming from the milking shed which George won’t let her enter.... Ash is sure she can hear George whispering to someone or something inside....

A presence haunts the farm, one that feeds on fear itself, and it’s hungry. To survive, Ash and George must face past traumas and embrace the things that go bump in the night, or risk being destroyed by them.

Recorded in partial 360 degree sound on location in Yorkshire, this truly terrifying Audible Original stars Lucy Fallon as George and Pearl Mackie as Ash and is best enjoyed when listened to with headphones. This new podcast is a dramatic adaptation of the critically-acclaimed Sour Hall, one of the short stories written by Naomi Booth for Hag.

Please note: Sour Hall contains strong language, adult themes and scenes of a violent nature which some listener’s may find upsetting. In particular the series references sexual violence, and miscarriage. Much of this is explored via the lens of supernatural horror, but listener discretion is advised. More detail on potentially triggering content can be found by clicking 'details' on each episode in the app. And for the best listening experience, wear headphones.

This original podcast is 6 episodes in total. New episodes will arrive in your Library daily over six days from 25 January, 2021.

What listeners say about Sour Hall

I enjoyed the performances, I didn't use headphones which were recommended and I believe with the musical score it would have been better on headphones. I could tell where the story was headed pretty early on so a little disappointed with that fact, but it was as a novelette so it was short.

Wasn't what I expected

Honestly I didn't really know what to expect, but what I got was much better and more realistic than I could have imagined. Obviously it's fiction and the storyline goes into weird and unreal places but the characters are portrayed incredibly realistic in terms of their relationship dynamics.

Best I have heard so didn't want it to end just awesome all way round!!! More please n Thank you!

I find this type of audio book to be hard to follow. It jumped from one scene to another. When they moved from being on the farm to shopping. It took me a while. By the time I realized it was a different scene or location I had to repeat the scene. I don't think I would follow another book like this.

This is a test review.

This is a great listen. I really enjoyed it. The narrator had a nice way of narrating the story. I highly recommed this listen.

Heavy breathing and loud screams seem to permeate all aspects of this story. Thumbs down.

This is great! As someone who doesn’t usually enjoy horror it’s a testament to the writing and acting that I can’t wait for more episodes. Growing up in rural Montana, I can appreciate the folklore and supernatural elements of an old family farm. Please keep George and Ash safe! I love them and can’t wait to hear where their story goes.

Loving every second! The daily releases are killing me but somehow Ill manage to make it another 24hrs lol

The best parts or radio in a new form

This was excellent. It really reminds me of the old radio dramas, which were sadly replaced by Top 40 on the FM and screaming hellfire on the AM radio channels.

This was atmospheric, traditional, and yet creative and new. I love the Yorkshire accents, the sounds of the storms, and the animals. Love the chilling moments, and the mystery.

This was beautifully performed and presented.

finally something that keeps me up, focused and thrilled! love it so much!!! I couldn't stop listening especially compared to mosr of the recent podcasts that are nore into morals or education this came as a breath of fresh air!

Sounds effect and performance : I am chill in'

Honestly, I am a bit nervous when I started listening to "Sour Hall". The screaming and suspense sound effect really chilled to the bone. Must listen...Honestly, I really love audio drama and I wouldn't miss this one.

Propaganda Clothed in a Supernatural Saga

If the author focused more on the story than the two main characters, listening to this series would have been more enjoyable.

good beginning but then...

maybe I'm a snob for a great narrative? I just felt that my 1st time author Godkid would have written better. the whispers were spooky! gals were o.k. but the owner of the farm needs to work on her emotions being projected as she acts. had 2 get cues from Her g.f. I didn't finish. the track went from #2 to #6 so I got confused & heard THE WORST PART YET. Just listen 4 a bun in the oven - as some say. it gets so poorly delivered I gave up. with work this could be really good. not just now however. so sorry to disappoint but I wouldn't listen to it again if it were mandatory for my membership. I adore AUDIBLE so that says a big mouthful. hope my British friends across the pond like it more. thx 4 reading this. ♡ b well. P.S. thx 4 not harming the horse in the story. age is 1 thing but animal torture makes me upset & I think it's cheap.

Ok so I started listening to Sour Hall on a whim and boy I'm happy I did. talk about creepy, let's just say I popped my headphones in while in bed in the dark to listen a bit befor bed and I had to stop and pop a light on! performance was great and clear definitely worth a listen!

Couldn't get past episode 1

The voices are so raspy and the deep sighs and kissing noises just aren't something I want to listen to in a book or podcast. Should have focused more on the supernatural element, less on the forced romance.

Good way to pass the time

Very reminiscent of A Haunting tv show, a fun little story. The ending did feel a little flat, but I still enjoyed the build-up.