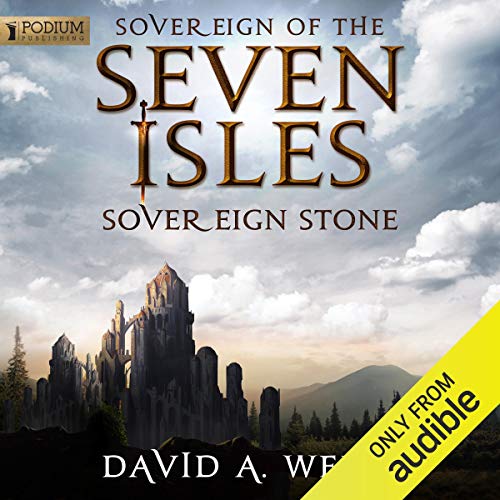 Written by: David A. Wells
Narrated by: Derek Perkins
Try for $0.00

After gaining entrance to Blackstone Keep and recovering the legendary Thinblade, Alexander must seek out the Sovereign Stone, and quickly.

Contained within the ancient teardrop ruby is the secret of Wizard's Dust, the source of magic and the one thing that will ultimately decide the final battle of the Reishi War. Prince Phane will stop at nothing to lay claim to the Stone and with it the world.

Sovereign Stone is the story of Alexander's struggle to retrieve the Stone from the aether where it's been lost since the Reishi Empire fell 2,000 years ago and prevent Phane from learning the most dangerous secret in the Seven Isles.

What listeners say about Sovereign Stone

I am enjoying this book and keep putng things off

Hi there All,
I am listening and enjoying this book so much I keep putting off doing things, so I can listen to more, although the Author is just a bit repetitive, it is still interesting enough to keep listening. I have just used another credit to buy the next in line, so you can see that I mean what I say. This is a great series, and I shall be sorry to get to the end, I have not looked to see just how many books there are in it, but then I shall see if this Author has written anything more, because he keeps the story interesting enough to see what happens next. The Narrator has also made me want to go on listening, he seems to have grasped the story and he does not try to make up a voice for everyone in it, just the few key people who are most important to make the story great to hear. I personally cannot wait to find out what happens next.

Would you listen to Sovereign Stone again? Why?

yes, there is so much going on that you need to hear it a couple of times to get all of the info. it is also hard to put it down because you want to know so badly what is going to happen next.

What other book might you compare Sovereign Stone to and why?

I had a hard time putting it down. he really draws you in and holds your attention.

I wasn't that keen after the first book as it seemed that the author repeated a lot - something happened in the book then he had to tell the others what happened in detail and then they had to tell it again later - that drove me nuts in the first book but it isn't a problem in the second book and I quite enjoyed this book. I listen to a lot of epic fantasy books and this one was quite enjoyable. Will definitely be getting book three whereas I wasn't so sure after book 1

Nothing Original, But Enjoyable None The Less

I’ve been meaning to write a review of each of the book in the Seven Isles series, but just haven’t seemed to get around to it. Now that I completed it, I have decided to write a review of the entire series instead. I guess as a whole I would best describe The Seven Isles as The Wheel Of Time Lite. With much of the same concepts, evil returns to the world, as a young hero and his friends take up the unwanted duties to save mankind, the Seven Isles doesn’t have quite the depth of Robert Jordan’s novels.

Books one and two are much the same, and center around the young hero Alexander. After his brother is murdered, he returns home to find that an evil Arch Mage has arisen from the dead, and Alexander is the long lost ancestor of an ancient king, the only person who can defeat the mage. Predictably, our young hero wants nothing to do with saving the world, but the Arch Mageforces his hand by sending evil forces to kill him. The story stays exclusively with Alexander’s character in the first two books as he and his friends run for their lives. The story almost becomes comical as they are repeatedly attacked by both men and creatures. It seems that our band of heroes can only walk mere steps before another attack comes from soldiers, wizards, demons, dragons, and wild animals. At one point they are attacked by a swarming hive of bees. Each time they barely survive and must heal themselves with magic or potions. It really became a bit ridiculous the amount of times characters should have died only to healed just in time. Despite these things, for some reason I still found myself enjoying the books enough to continue.

Books three and four of the series mark a vast improvement. After two books of following only Alexander, the book suddenly opens up to include the view points of other characters. The best of these are Alexander’s new wife Isabel, and his sister Abigail. The story improves greatly from this point as plots begin to take form, and the group does less running and hiding. Alexander begins to strengthen his magic, and his friends find they have some powers as well.

Books five and six form a bit of a lull in the series as Alexander is either injured or in the custody of one enemy or another for much of the two books. He learns to project his image to anywhere in the world, and spends much of these two books helping the others from afar. The other character blossom more in this book, which was a good thing, but waiting for Alexander to return to the action got a little old. Secondary plots are given more time as Alexander is away.

The seventh and final book is by far the best of the series as our heroes prepare for and execute the final battle with evil. The final battle is drawn out nicely, and most plots are put to rest nicely so the the world may live happily ever after.

Overall, despite this story not being the most complex or original, it redeemed itself with likable characters and an overall enjoyable feel to it. Yes the good characters were good beyond the point of saints, and the evil were predictably wicked, but I found myself enjoying the series more and more as I went along. I almost gave up on this series after book two, but for some reason I found myself wanting to continue on. By the end I found the Seven Isles to be very rewarding listen.

good but far from perfect.

(note, after finishing the serien i concluded that i didn't like it. or more precise i've came to that conclusion quite early in the series but since i already owned the first 3 books and my type of work allows me to listen when on duty and didn't find the books so bad that they was unreadable. i decided to finish the series.)
so my conclusion is an ok story with too many things I do not like

so let me list som of the things that i dislike about the series. so if you don't find this to break your enjoyment of a book you will find a decent fantasy series all true somewhat predictable and generic

- the focus on love this book series focus very heavily on love. if they only have used it a couple of times I would not hold it against them but the book series it's loaded with mentioning on how strong love conquers everything

- the need for justification it seems like the author feels he must justify Every kill the hero or the good guys make. and explain how these people are evil and deserve to die. again this is something I had accepted in small quantities. I realize that some feel the need to justify his hero's actions. although it is clear that they did the right thing. and to make the story less grim and more appropriate for a younger audience.
but it becomes too much of it. if one had all together all the cases where it is explained that these are bad people. or where the hero thinks to himself that this is bad/evil people, the text would hav been as long as one of the books.

- repetition. many things are repeated in series. mostly so that some lines are used very often example. (it was over in a couple of seconds) after the description of a fight seen.
and more of the same.

- stupid magic. well this this spell is OP so i'm gonna use it ONE time. the bad guy in the story can evoke demons and can command them to and do his will but halfway through the series, he stops doing it. at least as much as it seems like he should be able to. same goes for the '' good '' mages. they have several OP spels that they only use once. And last there is a staff that has a spell called falling star. described to do exactly what the name describes. (Equivalent of dipping our planet into the sun) this wand is used. but magic is magic and it is partly vaguely described

See my review for the first book in series

What did you love best about Sovereign Stone?

It is part two I'm what is essentially one big long story. You are either in for it all or. Not. All the books,are fairly good on quality but book two is probably the hardest subjectively as so much of the world is still being set up and much of the early action is fairly tame compared to 3 4 and 5 which twist and turn and reveal fresh creativity that benefits greatly from the set up dome in books 1 and 2. Obviously. The immediate objective in this book is the acquisition ofmthe sovereign stone but that is accomplished much earlier than one would think in this book. The rest of the book explores what this acquisition has set in motion. Anyway. Great book and part of a great long epic. Classic fantasy yarn

such an amazing book!!!! so addicting!!!

I absolutely love this book series I cant wait to read them all! heck ya!!!!

There is non stop action and suspense! The plot hooks you from the beginning of the book!

Amazing story and excellently portrayed by the narrator. The story is very detailed and the characters are very well written. I feel that I am there with them and their triumphs and loses are mine as well.

The creativity was good. Everything else was torture. Really bad narrating as well. A truly eye rolling experience.