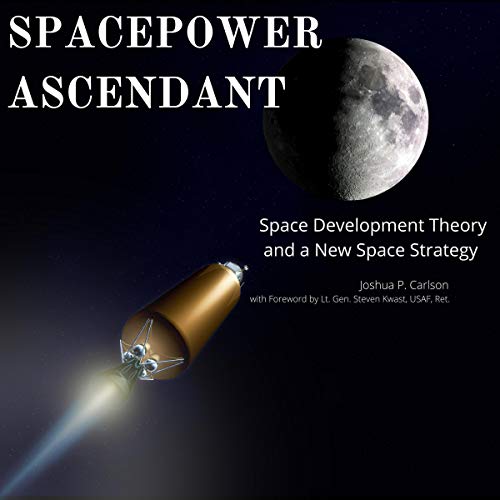 Written by: Joshua Carlson
Narrated by: Lyle Blaker
Try for $0.00

"Spacepower Ascendant is essential to the intellectual development of every space professional, because it introduces a new paradigm of spacepower that transitions from a focus on providing support to terrestrial warfighters, to the eventual expanding of roles and missions of the Space Force to secure broader national interests in space. It lays out a compelling case that some roles and missions need to be added sooner rather than later, so our space forces will be ready when needed, instead of scrambling to play catch-up when disaster occurs. The book considers all facets of spacepower: commercial, civil, intelligence, and military, and describes how spacepower supports all instruments of national power around the globe, and eventually into space.” (National Security Space Institute’s 2021 Reading List)

Whether it is recognized or not, America is engaged in a space race with China. Unlike the previous between the USA and the USSR that resulted in multiple moon landings, this is a new space race to expand and exploit the resources of the solar system. America initially embarked on this race in a similar fashion to the previous one, focusing on scientific exploration of deep space and satellite support to terrestrial military forces. The new space race demands a new mindset that integrates maritime commerce and naval warfare principles into space missions using a whole of government approach. The goal is national power projection into the space domain, both deep space itself and the planets and moons in it. The purpose of this book is to examine China’s theory and strategy in the current space race, extrapolate the current strategic trajectories, and then propose a new theory and strategy for space that will result in a continuous advantage for America, its allies, and all lawful and non-hostile users of space. Space Development Theory posits that new areas and domains go through a progression of exploration, expansion, exploitation, and exclusion.

What listeners say about Spacepower Ascendant

Relevant, concise and entertaining. We go through a lot of these types of books, and this is one of the ones that we share. It's a quick read (well performed in audio version), with good flow and presents a lot of well crafted strategic and tactical information in an entertaining fashion. The author helps you to see "why" we should care about what happens in space. It presents "plausible" scenarios that help you grasp the possibilities as well as the challenges in reaching for the stars. It also helps explain the critical need to think past the novelty of space exploration, and ultimately developing a viable space commerce industry. As the author clearly states, the US may have the current technological lead, but we risk losing it quickly to the Chinese if we don't recognize space as the next great frontier and commit to leading in its development. High recommend. jmw / StellarModal Transportation Assn.

Powerful Way Ahead for Humanity’s Future

Space Power Ascendant is a MUST read. Joshua Carlson powerfully charts a way forward for the burgeoning #NewSpace economy through apt distinctions of the oft-confusing roles of both civil and military interests in space. Through clear and concise prose, Mr. Carlson stays laser focused, tantalizing the reader (listener) with just enough facts to compellingly convey space’s ascendancy.

Humanity’s final frontier has never been so close and approachable. There’s so much yet to accomplish. With this book as a guide, we are one step closer to accelerating that future!

And what’s more, Lyle Blaker is a phenomenal narrator with an incredibly approachable cadence, clear annunciation, and awesome intonation. Spot on!