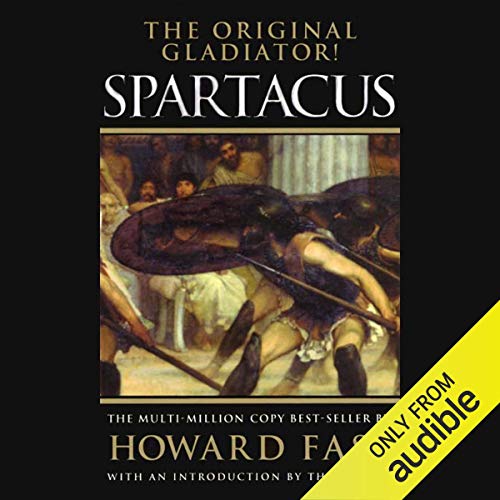 Written by: Howard Fast
Narrated by: Julian Elfer
Try for $0.00

Spartacus, a fictionalization of a slave revolt in ancient Rome in 71 BC, is well known today because of the 1960 movie starring Kirk Douglas and Laurence Olivier. It was originally published in 1951 by Fast himself, after being turned down by every mainstream publisher of the day because of Fast's blacklisting for his Communist Party sympathies. The story of Spartacus, born a slave, trained as a gladiator, who led a slave revolt that was eventually put down by Crassus, was immensely popular and went on to sell millions of copies.

What listeners say about Spartacus

I loved the movie, but this book was not about battles and very different than the movie. It is about the Human Condition and what we do with the brief time we have on Earth. It does very well with character development. You can see these people in your mind's eye. The narrator, the revealed thoughts, and the dialogue are extremely meaningful. It is a spiritual journey of the human condition without God. I thought the whole thing simply amazing and it is hard to put into words. It also is really about modern times and not the past, and our need for purpose and justification. This was the only flawless audiobook I have read because it had a deep meaning that goes to the heart of life and ideals that give life meaning.

I listened for 1 1/2 hours and had to stop because I was so bored. The book was slow paced, has no discernible plot, and seems to focus on ancient Roman atrocities and vices. Don’t waste your time.

Gripping. Compelling. Couldn’t recommend more highly. I was thoroughly engrossed in the narrative and meta narrative.

Loved every minute! Beautiful, violent story that swept me up in the Roman slave revolt. Great story, narration and performance!

Had potential but buried by agenda.

Perhaps I was hoping too much from a professed communist leaning author, but I had hoped his agendas wouldn't tinge the story too badly. I was wrong, and it is too bad as it was an engaging and fairly well written story. As a piece of fiction. we can look past some of the historical inaccuracies, but assigning homosexuality to all the great and powerful men of the book, besides completely unnecessary; was ridiculous. The book could have done without his soap box preaching the virtues of socialism as well. It could have been a good book, as it is.... it is passable if you are bored and don't mind believing that every powerful Roman was gay.

turgid and self congratulatory

The author made a point of putting forth his Communist bona fides from the start which making it only three chapters in kept wearing on me. The style is not particularly flowing or enjoyable

The reader was potentially a very good reader, but he would go from almost a very soft whisper to very loud. I spent a good deal of time going back to try and hear the whispered parts. Very annoying. The story was OK, but I remember the movie being better. That's rare for me. Usually the book is better. It was very interesting to note the perspective of the author. His views of ancient Rome were from a decidedly communist perspective. I will admit I dont know enough about ancient Rome to challenge the author's view, but I do wonder if the wealth and power of the empire was built solely on the backs of laborer and slave labor. Where the aristocracy did nothing but idle their days away (sounding very much like 19th century British aristocrats). Maybe, but interesting from the view of an admitted communist. To me it was also fascinating that his description of the ideal man, Spartacus, was very much like Jesus as described in the gospel of John. A pure and worthy human being, not about power over people, but about love, and worth, and the value of human life.

First I read it, then I listened to it. Now, the story of this simple man is part of my life. Thank you, Howard Fast.

beautifull and eppic story. a classic book. loved it very much. the narrator is very good.

Absurdly awful. Bland prose and Marxist rhetoric combine to make an insipid story with two dimensional characters. Do yourself a favor and pass on this.