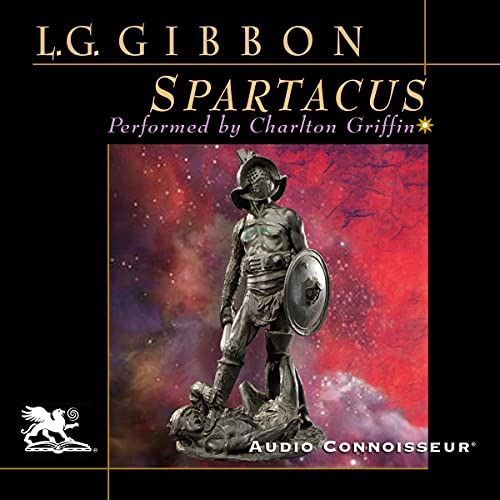 Spartacus is one of the most unusual historical novels of the 20th century and certainly one of the most realistic. In a whirlwind of savagery, despair, and desperation, the listener is suddenly and violently plunged into the great Roman slave revolt of 73 BC. The author, Lewis Grassic Gibbon, does not waste time by slowly setting up his characters, nor in leisurely describing domestic scenes. From the first word, you are literally hurled into the frenetic life of an escaped Greek slave by the name of Kleon. As the novel rapidly unfolds, you experience vicariously the harsh reality of being a slave on the Italian peninsula during the first century before Christ: the brutality, the fear, and the hatred. All of the characters are real people whose names have come down to us from the ancient accounts of Plutarch, Sallust, and Appian. Though the three historians differ somewhat in their accounts, Gibbon has deftly combined the historic narratives into a seamless, dramatic whole. Spartacus, Crixus, Crassus (“the Lean”), and all the others are masterfully presented to us in all their terrible existence. The listener is urged to seek out the Wikipedia article “Third Servile War” in order to study the maps displaying the complex and sometimes baffling movements of Spartacus and his slave army. Follow along as Spartacus and a band of mighty warriors escape from a gladiator school in Capua and attract tens of thousands of followers. It is a revolt that will shake Rome to its foundations...and it almost succeeded.

Lewis Grassic Gibbon was the pen name of James Leslie Mitchell, a Scottish writer who left behind a series of literary masterpieces that are still revered in Scotland to this day. Tragically, Mitchell died young in 1933, soon after completing Spartacus.

"The clear message of the closing pages of Gibbon's novel is that the butchering of the slave leader by Crassus and his men by no means marks the end of the rebellion, any more than the ghastly crucifixions on the Appian Way broke the spirit of humankind in the search for justice and freedom." (Ian Campbell)

What listeners say about Spartacus