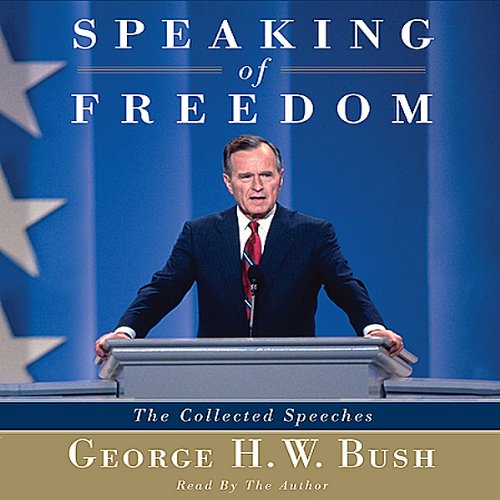 George H.W. Bush takes a special look back on the momentous global events of 1989-1992 - the fall of the Berlin Wall, the collapse of the Soviet Union, and the liberation of Kuwait, to name a few - and reminisces about what it was like to be President through such unprecedented times. Choosing from among the hundreds of speeches he gave while in office, former President Bush selects the speeches that meant the most to him, and introduces each one with candid comments recalling the circumstances and events leading up to it.

Selections throughout Speaking of Freedom bring back the fascinating times of Lech Walesa, Mikhail Gorbachev, Vaclev Havel, and even Saddam Hussein - when we watched as the idea of freedom seemed to spread all over the world. It was a stunning time in world history, and the 41st President looks back on it all from his perspective as commander-in-chief, diplomat, politician, Navy pilot, and grandfather.

With his usual charm, self-deprecating wit and sharp perception, President Bush casts a wise look back on some of the most historic events of the 20th century. Through his words that motivated people all over the world to become involved in ideas that were bigger than themselves, George H.W. Bush shows us what it means to be Speaking of Freedom.

What listeners say about Speaking of Freedom