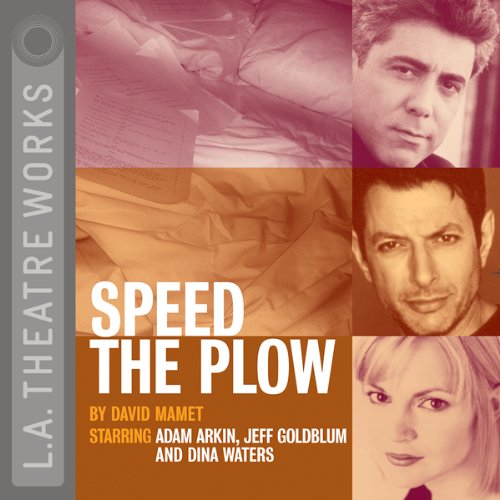 Jaded Hollywood producer Bobby Gould has spent a career reaping what others sow, until the night he's forced to choose between his loyal friend's sure-fire hit and a beautiful girl's art-house project. During a wicked evening of seduction and manipulation, Bobby discovers that the power he exerts is more elusive than it seems.
(P)2004 L.A. Theatre Works
Drama & Plays World Literature
Show more Show less

What listeners say about Speed the Plow

Well done at all levels!

"Speed-the-Plow" is a fast-moving comedy/drama about Hollywood values (or lack thereof) done in David Mamet's characteristic machine-gun verbal style. As usual, Mamet's dialog is superb--funny and smart--although at times he almost crosses the line into self-parody. The actors, particularly Adam Arkin as a desperate studio exec. trying to use a once-in-a-lifetime opportunity to move up the production ladder, are remarkably good. The only reason I did not give it five stars is that the subject matter is not earthshaking; there is no tragic core here. Think of it as "Glengarry Glen Ross" lite. However, the play is relentlessly entertaining, and there are plenty of ideas thrown out about what constitutes a commercially viable film for the listener to ponder. Altogether, this is a highly enjoyable listen, and I think any modern theatre fan will enjoy it.

The excellent performances in this production make it a joy to listen to. Mamet's dialogue sparkles and crackles as it carries you along on this fun insight into life in the film industry. Even the music played between Acts is delightful.

A very interesting and colorful view of movie making in this day and age.

We let Mamet horsewhip us to the edge of the cliff . . . And smack us up the side of the head and we go back to our lives.

That’s what good Theatre does. Thank you. Five Stars *****

Try it at 2X speed

Listened to it the first time, didn’t like it.

Gave it another shot at 2X speed, loved it!

2X speed is the key for this one. Good luck

They made me laugh in the beginning, Goldblum was talking so fast, interrupting, constantly answering phone saying hold my calls, and bring coffee, neither of which happened. Pretty good, if you like these two actors you will enjoy.

Goldblum is freaking Goldblum. No one can add the level of eccentric charisma he brings to a role. Arkin and Waters were also exceptionally good - there's just so much subtle intensity in their choices. I wish I could have seen this live!

A play that comes over more like a sketch

This is an early Maker play, but all the trademarks are here. The muscular language, the high energy exuded by the alpha male characters, the interaction between the small cast but, unfortunately, the plot is not strong. A minor league movie producer passes on the chance to move into the big leagues by producing a simmer blockbuster in favor of an Arthur's movie before flipping back. More an idea than a fully conceived play it seems to be a glimpse into the life of the characters more than an expose or revelation of the people. The words are still there but their impact was not truly felt, at least not by me.