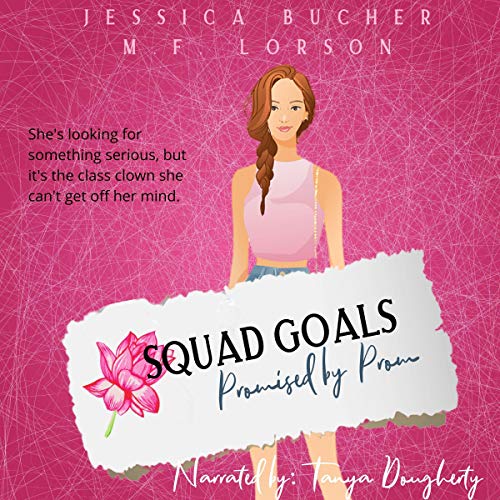 She's looking for something serious, but it's the class clown she can't get off her mind.

Nora has always been the odd duck in her squad of three - a trait that never bothered her before. But now that Lucy and Addy are going off to college and Nora is stuck in Delinki, she's ready to find her match. Which is why her senior year goal is to score a serious relationship by prom.

Step one: Hit the dating scene.

Step two: Keep the loyal guy friend on the sidelines as an escape plan.

Step three: Do not get caught kissing the escape plan!

Max has been in love with Nora for as long as he can remember. But he's also a major flake when it comes to relationships. Comic relief is his usual MO but if serious is what she's looking for, this class clown better be ready to grow up to get the girl.

Listen to the final installment in the Squad Goals series today.

What listeners say about Squad Goals

I really enjoyed this series. This is the the third book in the series. I loved Nora’s book for the friends to lovers trope. I can’t wait for Nina’s book.

Looking for what's already in front of us

It was sweet to hear Max and Nora's story. Since they've known one another forever, and Max is Nora's best friend's little brother, he's been a tagalong for many of the fun times in her life. But he's always been such a goof... And as much as she likes Max, she's looking for someone more mature, who can participate in a serious relationship. Max is great as a friend, but it's hard to consider him as anything more, even though he becomes the yardstick every other boy is compared to.

Who else accepts her as she is, without censure or primping? Who else can she have as much fun with?

But her best friend will kill them both if she dares even consider Max as anything more than a friend. So, what's she to do?

It's always fun when secondary characters from earlier books get their time in the spotlight. I enjoyed Max's character a lot in the earlier books of this series, so it was very enjoyable to get inside his head in this book and see what makes him tick!

Definitely a satisfying ending to an enjoyable series! I highly recommend it!

Promised by Prom is the third book in the Squad Goals Series, and I liked this story just as much as the other two. This book was the perfect ending for the series. This is a fun, cute, and sweet story. I loved Max. The narrator was perfect for this book!