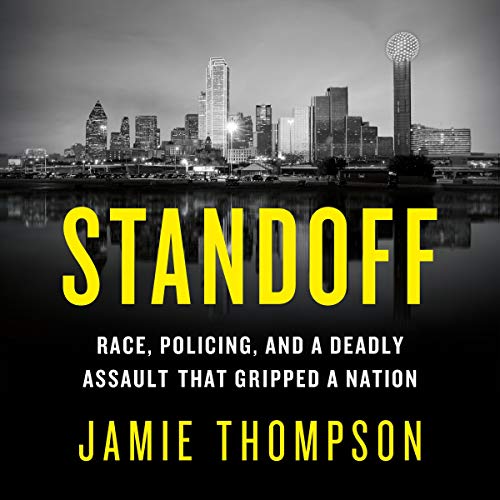 "This audiobook is fueled by the awesome combination of a compelling story, good writing, and a captivating narration...In a short audio note, the author says she hopes that listeners will be able to step into the shoes of the people portrayed. [JD] Jackson's excellent performance makes that easier." (AudioFile Magazine)

This program includes an author's note read by the author.

Standoff is award-winning journalist Jamie Thompson's gripping account of the deadliest attack on law enforcement since 9/11 and the officers behind an audacious plan to stop it.

On the evening of July 7, 2016, protesters gathered in cities across the nation after police shot two Black men, Philando Castile and Alton Sterling. As officers patrolled a march in Dallas, a young man stepped out of an SUV wearing a bulletproof vest and carrying a high-powered rifle. He killed five officers and wounded 11 others.

It fell to a small group of cops to corner the shooter inside a community college, where a fierce gun battle was followed by a stalemate. Crisis negotiator Larry Gordon, a 21-year department veteran, spent hours bonding with the gunman - over childhood ghosts and death and racial injustice in America - while his colleagues devised an unprecedented plan to bring the night to its dramatic end.

Thompson’s minute-by-minute account includes intimate portrayals of the negotiator, a surgeon who operated on the fallen officers, a mother of four shot down in the street, and the SWAT officers tasked with stopping the gunman. Their stories go to the heart of the deeply pressing issue of race and policing in our country and reflect America’s divide over how to view the men and woman assigned to protect us.

What listeners say about Standoff

An Insight from those Involved

This book is an intense account of what happened on 7/7/2016 & tells the story from the point of view of those that were directly involved. This book shows that the author thoroughly researched the backgrounds and frames of mind of those involved that night. I Highly recommend this book.