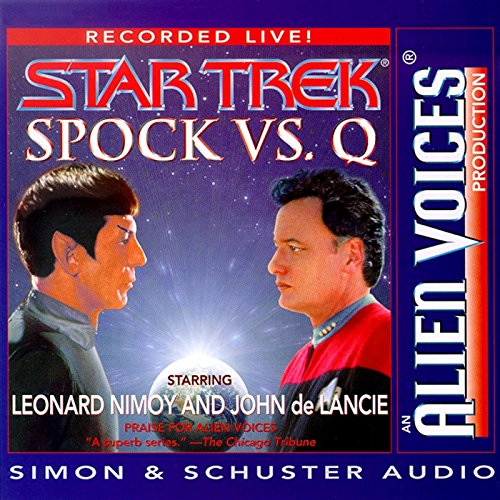 As the end of the twentieth century nears, an asteroid is hurtling toward Earth. When it hits, the impact will result in the end of all life on the planet.

Ambassador Spock travels back in time to subtly warn Earth's inhabitants of impending doom while calling into question humanity's priorities. However, before the truth is told, the all-powerful being, Q, appears and reminds Spock that he is prohibited from interfering in Earth's history. Besides, Q doesn't see mankind as something worth saving.

This initial encounter between the two legendary characters explodes into a battle of wits as Spock cleverly befuddles Q with his own words. As barbs are exchanged, and humanity's flaws and wonders are laid bare, Spock's logic just may convince Q that humans are indeed a species worthy of salvation; but will he be too late?

What listeners say about Star Trek: Spock vs. Q (Adapted)

Too amazing to pass up!

This audiobook was awesome! It is so ironic and pleasing to get the chaos and nonchalantness of Q debating humanity with the cold, calculated, logical Spock, mixed with a brush of them both being loose and vying for laughs. The material is certainly funny. It was written by a very talented woman who knows the characters deeply. Nimoy and de Lancie both give top notch performances. V’ger from the first movie and the whales from IV get name dropped, it was pretty cool. The only shame is that this wasn’t a tour of some sort. I would have loved to have seen this live in Toronto. Solid release, I highly recommend.

I was a bit shocked when I started listening because this isn't really a Star Trek book. Its more a vaudeville/farce. Once I got over the shock and started listening, I thought it was rather fun.

It would be much better seeing the performance live but I think anyone who likes the Star Trek characters would enjoy this.

This is definitely a stage drama in front of a live audience; know it for what it is. As such, I found it remarkably entertaining. The skill and presence of both actors that made these two characters great is well expressed in this venue, as both are clearly having a tremendous time with the exchange. It is full of heart, wit and laughter. They play anachronistically, using the current global green issue as the form of the interaction, while incorporating many nuances from the series as tidbits to play off. I would agree it is definitely aimed at trekkers, and would be most appreciated by that crowd, but as such it is very enjoyable.

Must have for any Star Trek fan.

A quick read. Enjoyable from start to finish.

What was one of the most memorable moments of Star Trek: Spock vs. Q (Adapted)?

The back and forth between Spock & Q... WONDERFUL

Is a Star Trek Convention skit really a book?

I love Star Trek, but this was too over the top. More importantly, I was surprised that this was recorded live at a Star Trek convention or equivalent. Nothing in the description emphasizes or even mentions this. You can hear the audience hooting and hollering throughout the entire 54 minutes. This is really more of a weak attempt at a stage play between two popular characters then any real story. Though somewhat unique and cute at times, the majority is a series of haraugues with no real purpose than to hear the characters talk. Hard to call this a book or even a story. If you haven't heard it before, you will probably be disappointed. Unless you enjoy EVERYTHING that is Star Trek (no exceptions), buy something else.

Love it!!!
The sparring of words!
the mental action
I will listen this again and again!

I simply loved the back and forth banter and thoroughly enjoyed Spock's humour. This was a duo I didn't know I needed to hear.

I'd happily recommend this to any other Star Trek fans.

This is the first time I've heard Leonard Nimoy and John de Lancie's performances on Audible, and I loved it. Their characterisations and deliery were wonderful. There was an underlying serious message within the performance, which was balanced by the inherent enjoyment between both Nimoy, de Lancie and the audience. Five stars!

I've come across references to the 'Alien Voices' series in the past and this recording was my first experience. I thoroughly enjoyed it, and will be tracking some more down in future.

This was a real treat for Star Trek fans. It was performed live at a convention and featured not only Spock, but the actor who portrayed Q. He's just as obnoxious in this story as in Star Trek and trading barbs with our favorite Vulcan. This is just half the story although fairly complete in itself. Get the sequel, too.

Fun and Entertaining! an overall winner!!

What did you love best about Star Trek?

The antagonistic yet fun chemistry between the main characters. This is a great performance reading!! a fun "what if Spock & Q ever met" scenerio :O)

What was one of the most memorable moments of Star Trek?

The initial meeting dialogue, Q's ode to himself and Spock's discourse on human life are all quite memorable.

The verbal sparring was first rate and even though it is all audio, I could "see" them interacting in my minds' eye. That is how closely meshed ther characterizations are!!

If you like Star Trek and enjoy "Spock's" and "Q's' characters, then this (and the sequel) are both "must haves" for your collection.!!

You have to be a big Trekkie

This is a farce...which is okay, there are few funny moments. But a farce usually isn't effective over 30 minutes, and I gave this up within that time. It's not a story, it's a performance. Doesn't translate too well to audio.