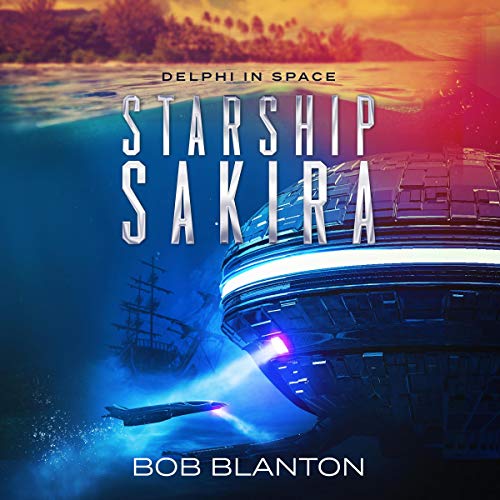 Written by: Bob Blanton
Narrated by: Jessica Gurd
Try for $0.00

What would you do if you found a spaceship? Would you call the government, would you pretend you never saw it, or would you keep it a secret? What would you do with it? Use it to gallivant around the galaxy, conquer Earth, get filthy rich, or try to improve life on Earth? Listen along and find out how Marc works to convert Earth into a spacefaring world capable of defending itself and of being united as it meets the other civilizations in the galaxy. He and his brother start planning their next steps, but the one they don’t know how to prepare for is the arrival of Marc’s 12-year-old daughter. She comes to spend the summer with her father. She’s very smart and extremely curious.

Marc and his crew need to accomplish all this without tipping off the US government and before the Paraxeans come looking for their spaceship. But they have help, the ship’s AI is on their side, and she’s smart.

Starship Sakira is the first book in the exciting new adventure series Delphi in Space.

Marc, a struggling scientist, hits the jackpot when he comes across an abandoned but fully functional spaceship in an underwater cave. Helped by his brother and his 12-year-old genius daughter, he tries to leverage Starship Sakira’s technology in anticipation of the aliens’ return. The fate of the Earth is in his hands.

As the first instalment of Bob Blanton’s Delphi in Space series, Starship Sakira sets the foundation for several more books by introducing listeners to the McCormacks and their quest of galactic proportions. When he unintentionally becomes the captain of the starship, Marc gains control of its superintelligent computer. With its help, he develops technologies never-before-seen on Earth, as he attempts to bring major changes to the world, and all the while keep everything hidden from the government. Fans of science fiction will find themselves wondering if, in Marc’s shoes, they would do the same.

Jessica Gurd’s calm tone and assured pace sets the mood of this science fiction story perfectly; an impressive feat, as much of the audiobook is composed of Marc’s internal monologues and dialogues between the characters.

What listeners say about Starship Sakira

A fun first novel in the series.

What if you found an abandoned Space ship at the bottom of the ocean? How would you start sharing the technology with the world without causing WW3?

This is one of those books that deals with political and economic issues in a fun way.

Not too deep or too complicated, you will not get mired in detail.

The narrator is so poor you can’t tell what character speaking half of the time! The other half you’re in shock at how poorly this was written

I read a story as a teenager about a guy who stumbled upon a massively advanced alien spaceship, which, for some reason, submitted to his control. This fantasy followed me my entire life and I often dwelled on what I'd do with the technology if it happened to me. That's what the author of this book thinks through, step-by-step, and you can tell he put a lot of thought into it. This book was clearly written for me, personally, so I'm very forgiving about its major flaw, which is the narrator. She indeed speaks in a monotone, with no attempt to differentiate between characters, and it's hard to believe that she has ever read aloud before. But she's not irritating, just not good. She doesn't detract from the story, just adds nothing to it. If the story catches your fancy, her lack of talent won't ruin it for you.

Lots of shortcuts in the story. Things that proceeded in the storyline just don't happen that fast even with high IQs. I expected better as this is a series. Money was being thrown around like water and even for rich folk, not even close to reality. The narrator: normally I have no preference between male-female but this one just did not do a very good job with this one. It was hard to tell the characters apart. Still, If you get the series at a bargain price it will be worth it for a long drive.

great story since I have thought about the same idea if I could help the earth with advance technology. the story goes a bit fast sometimes and the narrator was very monotone but as a AI she was spot on. looking forward to seeing the next book soon

couldn't make it through chapter 3. snoozefest . an empty vessel of a tome. no value whatsoever

The narration is wooden and detracts from the story. Good narration brings a lot to the story, it can more than bring the story to life, it can provide for new understandings and new ways of looking at the story. This narration is NOT that.

The books itself is good enough that I still was glad to listen to it. It's not a deep book, but just some lighthearted fun and I enjoyed reading it very much. i read all the other books in the series and will continue to do so.

I do love the author's other books more than the ones in this series and would like him to go back and do more in that series.

I am so happy and excited that there are more books in this series, already published and waiting for me to read, without having to wait. This is a fabulous story! I am so happy at the recent availability of self-publishing. So many more wonderful authors like this one are able to publish variety instead of everything being the same, from narrow publishing houses. Now I am off to start the next book. I cannot wait another moment! YAY! 😀😀😀

The story is an enjoyable light read for most sci-fy fans. However, the author needs to find a narrator who actually knows how to do the job. I’m usually more forgiving of narrators than this, but she sounds worse then a 10 year old reading Dr Souse. All the characters have the exact same voice. The only accent tried (and utterly failed at) was the Russian spy in book 2, all others use a Canadian/central northwestern accent... even though they are in Hawaii, Portugal, Florida, the Caribbean, and the Cook Islands. Oh, and the main characters are from Boston, one of the more distinctive accents in the US. Often, never mind differentiating between characters, there is no difference between dialogue and narration.

I think a Self Published author should...

I think a Self Published author should supported and encouraged if the first attempt(s) show signs of talent. I might have enjoyed this much more in print or with a narrator that didn't sound like a computer generated voice.
But I admire the self publishing, if i didnt make that clear. I have faith the series will get more entertaining as more resources accrue - i will be watching and rooting for you Ser Blanton.

The Mary Sue 12 year old girl character is a bit much. She can do anything and everything better than full adults, such as even better at being a solder than war hardened veterans. Another example: does not know about Gulf Stream, but yet comes up with concussions or solutions that no adult in the book can do.

Also, some hard to swallow events and I am not talking about a alien ship with an highly intelligent AI. That was easier to accept rather than some of the events that happened in the book.

However, it was an entertaining listen. The performance is not the greatest, but has potential to improve over time. I was able to listen to it without regretting purchase.