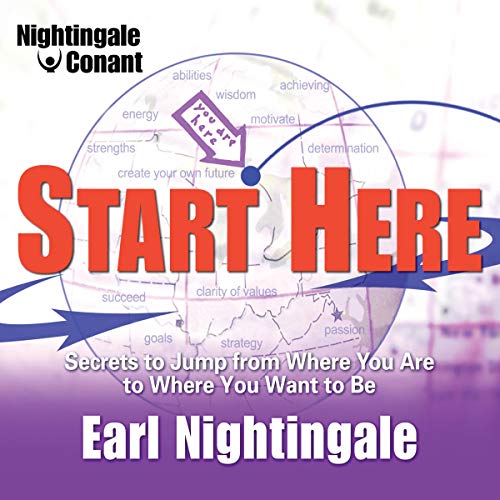 He is everyone's mentor, and his words can be your inspiration for achieving success.

"Nothing great was ever accomplished without inspiration."
—Earl Nightingale

Known as the Dean of Personal Development, Earl Nightingale was heard for over three decades on over 1,000 radio stations across the United States, Canada, and 10 foreign countries, making him one of the most listened-to broadcasters in history.

The unique thing about Earl's broadcasts and his recordings is that each one is a call to action. People don't just listen to Earl, they take notes; they replay his messages over and over; and they use his advice to make real changes in their lives.

The archives at the Nightingale-Conant Corporation contain thousands of letters from Earl's listeners telling him just how big of a difference his words have made in their lives.

Start Here is like a "greatest hits" album of some of Earl's most inspirational messages. It features such popular recordings as:

No motivational speaker delivers the goods like Earl Nightingale. His work shows his incredible research abilities, drawing ideas from some of the greatest minds in history. From the ancient Greek philosophers to present day commentators, he has read and digested the great works. And he has added to the library of human knowledge with his own original and creative commentaries on life and the ways of successful living.

What listeners say about Start Here

This is a good size collection of some of Earl Nightingale highlights such as The strangest secret and his reading of as a man thinketh. If you already have some of these titles you might be better off getting A more complete volume on audible like essence of success. If his is your first it is indeed a great place to start!

The title of this book really does it justice.

What did you love best about Start Here?

I really enjoyed the narration being done by the author himself...Earl Nightingale.

No favorite character but many interesting stories that act as examples of shared experiences.

What does Earl Nightingale bring to the story that you wouldn’t experience if you just read the book?

Earl Nightingale is delivering to you everything he put into his book himself. You are hearing every passion, excitement, enthusiasm, encouragement...everything a teacher can deliver to a student on their journey.

What’s an idea from the book that you will remember?

The tools! Earl Nightingale offers tools that help. Most of if not all these tools are simple and (have probably been heard in some way by you before) practical. He let's you know the issue is doing it! This becomes the listener's/reader's challenge!

All I ave to say is #GoAfterIt!

Earl was THE MAN

As always, useful information from the late, great Earl Nightingale. I'm always amazed by how much research and reading he did and he was able to pass along what he learned in a way that was understandable and memorable.

I will never ever have any bad references for Earl. He feels like a grandfather or father to me. Giving me the best and most profound advices on life. Simply one of a kind. Anyone can benefit from this kind of knowledge.

I return to this reading regularly, especially as a marker to reset where I am going and what I am working on. It's always a fresh drink in a desert.

A classic front the dean of personal development

All classic earl. This would be a great addition to any personal development library.

Words for the Wise

Nightingale shares his prodigious wisdom with the rich resonance of his baritone voice. Unfortunately, the production value of this audiobook is subpar, splicing various lectures together without proper indications or introductions. Nonetheless, the content remains as truthful, helpful, and valuable today as when Nightingale first made these recordings.

A must listen for all!! Listened to it 4x! Do yourself a favor and listen to this one!

Could be life changing

A message that’s not often spoken anymore. Could change ur life if applied. Great book especially for young adults