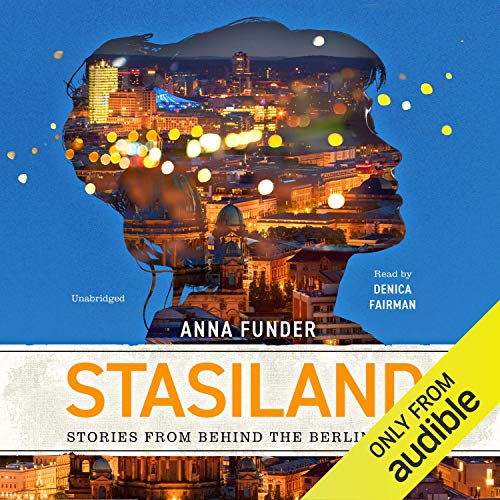 Stories from Behind the Berlin Wall
Written by: Anna Funder
Narrated by: Denica Fairman
Length: 10 hrs and 39 mins
Categories: History, Europe
5.0 out of 5 stars 5.0 (1 rating)

East Germany may have been - until now - the most perfected surveillance state of all time.

In Stasiland, Anna Funder tells extraordinary stories of ordinary people who heroically resisted the communist dictatorship, and of those who worked for its vicious secret police, the Stasi.

She meets Miriam, who as a 16-year-old was accused of trying to start World War III. She visits the regime’s cartographer, a man obsessed to this day with the Berlin Wall, then gets drunk with the legendary “Mik Jegger” of the east, once declared by the authorities “no longer to exist.” And she finds spies and Stasi men, in hiding but defiant, still loyal to the regime as they lick their wounds and regroup, hoping for the next revolution.

Stasiland is a brilliant, timeless portrait of a Kafkaesque world, as gripping as any thriller. In a world of total surveillance, its celebration of human conscience and courage is as potent as ever.

What listeners say about Stasiland

Very well researched & equally well told & narrated. This is non fiction that is written with such skill that it reads like fiction.