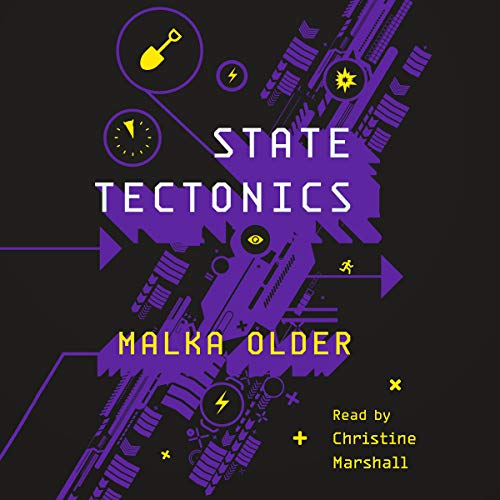 Written by: Malka Older
Narrated by: Christine Marshall
Try for $0.00

The future of democracy must evolve or die.

The last time Information held an election, a global network outage, two counts of sabotage by major world governments, and a devastating earthquake almost shook micro-democracy apart. Five years later, it's time to vote again, and the system that has ensured global peace for 25 years is more vulnerable than ever.

Unknown enemies are attacking Information's network infrastructure. Spies, former superpowers, and revolutionaries sharpen their knives in the shadows. And Information's best agents question whether the data monopoly they've served all their lives is worth saving or whether it's time to burn the world down and start anew.

What listeners say about State Tectonics

Just as with the previous book in the series, this one starts out slow and then gets really good. Lots of interesting characters that we either get to see develop from previous books or meet for the first time. Fascinating ideas about communications, government, and near-future culture. And everything is set outside the U.S. and the U.K, so you get a taste of a variety of different global locals - almost literally, given the focus on food and beverages!

The editor's/author's choice to classify this book/series as cyber punk feels like a huge disservice, and is the main reason this is not a 5 star review.

I have mixed feelings about this book being cyberpunk, as if it weren't listed as cyberpunk I would not have listened to it, but at the same time there are certain expectations that come along with the classification, and it was a letdown that almost none of these tropes made an appearance. It feels like the little that does address cyber punk tropes were thrown in as an after thought just so the book could fit into a relatively small collection of cyberpunk literature on auditable.

The book/series was a fun listen overall, but it is a huge stretch to call it a cyberpunk novel. It is more of a spy thriller set in the future. There is little in the way of the traditional cyberpunk staples: there are corporate governments, but the overall tone is bright and cheerful.

Probably the most cyberpunk tech described in the book would be the minor bio mods that simulate goose flesh on the back of the neck when it senses something out of place (this makes appearances in the 1st and 2nd novel). The characters are jacked unto the net and use projections as a display that can be projected at eye level or pushed further away so others can also view the image. These projectors may be implants, but the author does not spend much time detailing the tech. It is easy to imagine the projectors being some type of VR/AR glasses or contacts.

Overall, I enjoyed the books. and had this been correctly identified as a thriller set in the near future (almost all of the tech in this book feels like it is maybe 10 years out) then it would be a 5 star review across the board. I just feel like people should know what they are getting.

Great Resolution to a Brilliant "What If..."

I'm not really sure this would work as a stand-alone novel; if you have not read "Infomacracy", start with that one. That's the one which builds the world and asks "What If democracy was divided into manageable chunks of 100,000 people per 'state'?"

And, of course, there's the over-arching bureaucracy which "runs" microdemocracy: Information.

What's brilliant about this wrap-up to the Centenal Cycle is that it examines the benefits, risks, and drawbacks of the initial "What If", and draws the experiment to a plausible conclusion. At the same time, it leaves plenty of room for me to ask, "But What If it had been managed with...?", "But What If the bureaucracy had...?", and "But What If the corrupt elements were...?"

These are books about politics at the most raw: human interactions. These are also books about people dealing with the bad choices made by others, and then ultimately the bad decisions they made themselves. And, wonder of wonders, some of the characters are able to dig themselves out of previous bad decisions and actually be happy.

I see in some other reviews that some readers were not able to buy into Older's various narratives. I don't like thinking ill of people, but I can't help but wonder whether that's because something like 80% of the characters with viewpoint or speaking roles are women. I, frankly, found it refreshing to hear women being people, and not props. The men that are here are not "flipped stereotypes", except for one (who is explicitly not even given a name; he doesn't even have any lines). In fact, the men are also people.

The suspension of disbelief required for buying into the premise in the first book is rewarded in this book, because most of the unasked questions get addressed (if not answered). On the whole, I loved this trilogy, and will be returning to it from time to time (if only to be back in the company of Mishima).

I kept waiting for the story and punchline. they never came. don't waste your time