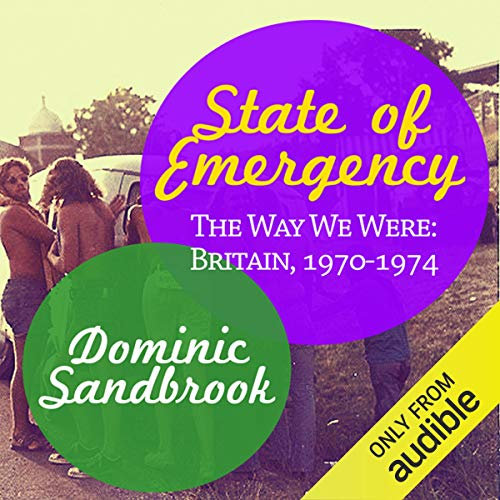 Written by: Dominic Sandbrook
Narrated by: David Thorpe
Try for $0.00

In the early 1970s, Britain seemed to be tottering on the brink of the abyss. Under Edward Heath, the optimism of the Sixties had become a distant memory. Now the headlines were dominated by strikes and blackouts, unemployment and inflation. As the world looked on in horrified fascination, Britain seemed to be tearing itself apart. And yet, amid the gloom, glittered a creativity and cultural dynamism that would influence our lives long after the nightmarish Seventies had been forgotten. Dominic Sandbrook has recreated the gaudy, schizophrenic atmosphere of the early Seventies: the world of Enoch Powell and Tony Benn, David Bowie and Brian Clough, Germaine Greer and Mary Whitehouse.

An age when the unions were on the march and the socialist revolution seemed at hand, but also when feminism, permissiveness, pornography and environmentalism were transforming the lives of millions. It was an age of miners’ strikes, tower blocks and IRA atrocities, but it also gave us celebrity footballers and high-street curry houses, organic foods and package holidays, gay rights and glam rock. For those who remember the days when you could buy a new colour television but power cuts stopped you from watching it, this book could hardly be more vivid. It is the perfect guide to a luridly colourful Seventies landscape that shaped our present from the financial boardroom to the suburban bedroom.

Dominic Sandbrook was born in Shropshire in 1974, an indirect result of the Heath government's three-day week giving couples more leisure time. He is now a prolific reviewer and commentator, writing regularly for the Daily Telegraph, Daily Mail and Sunday Times. He is the author of two hugely acclaimed books on Britain in the Fifties and Sixties, Never Had It So Good and White Heat.

“Superb ... vivid ... magnificent ... Anyone who was there should read it: and so should anyone who was not.” Simon Heffer (Literary Review)
“Hugely entertaining, always compelling, often hilarious” Simon Sebag (Montefiore Sunday Telegraph)
“Thrillingly panoramic ... he vividly re-creates the texture of everyday life in a thousand telling details” Francis Wheen (Observer)

What listeners say about State of Emergency

Anyone interested in recent UK history, absolutely essential listening or reading. Especially for non-British listeners/readers who have no memory of the events and times.

It seems comprehensive- from Whitehall on down to the Yorkshire mine strikers and every middle-class concern in between. It covers gov't policies on wages and taxes, social movements like feminism and immigration, and pop cultural moments such as Bowie, Rising Damp and A Clockwork Orange in an equally entertaining manner. Despite the utter bleakness of energy shutdowns, general strikes, and stagflation there always seems to be light at the end of the tunnel.

It also helped me understand a lot of the Monty Python sketches I saw as a kid. They'd reference British politicians like Heath or Maudling, often using them as punchlines. I wouldn't get the joke but I'd laugh anyway b/c they were just that funny and I figured I'd get it someday. Or when Eric Idle had to read copy by candlelight wrapped around a blanket. Oh how absurd they are! Nope- that was a lot closer to reality than I could've imagined. Today's the day I got those references. Not just Python, but movies like "Clockwork" and "Straw Dogs" and "Get Carter" now have more meaning b/c of the context provided by this book.

And because of this book I've discovered for myself Kenneth Williams!

What does David Thorpe bring to the story that you wouldn’t experience if you just read the book?

His voice is much better than the voice in my head. I love his voice caricatures of the variety of characters in the book: Edward Heath, Kenneth Williams, and Tony Benn in particular.

"You thought the breakup of The Beatles was bad...you ain't seen nuthin' yet!"

The '70s in general gets short shrift as that tacky decade between The Sixties and the rise of Thatcher/Reagan and technology. But that's when so much build-up of the promise of the previous decade ran smack dab into harsh reality; that the world power Great Britain had to learn to live within strict limits, having lost its empire and dealing with the new global economy. As a left-leaner, I had to open my mind to a critique of Keynesian economics and I felt the author is very equitable in his assessments of UK economic policy. As an American in the 21st century, I take for granted low inflation, higher unemployment and a working power grid so hearing about the struggles between the Tories and Labour was utterly alien and fascinating.

Where does State of Emergency rank among all the audiobooks you’ve listened to so far?

Dominic Sandbrook's incremental histories about Britain in the post-war decades continue to enthrall me. He's perceptive, broad-reaching and witty, all at the same time. Who else can handle the bloodshed in Northern Ireland, miners' strikes, frozen fish fingers and the plots of "Dr. Who" shows and make them all work together thematically? For some, the ins and outs of British politics and culture may be too much detail but I found he manages to weave a great story while explaining an amazingly complicated period marked by sweeping change. David Thorpe does a wonderfully entertaining job as narrator _ even managing credible accents for a variety of characters, from Edward Heath to football hooligans (although his Italian accent is terrible and he tends to make all Americans sound a bit like B-movie gangsters). I loved this book and the followup, "Seasons in the Sun," and look forward to the next installment. I also recommend that Audible get Thorpe to do the previous books in the series, "White Heat" and "Never Had It So Good."

So well written it's truly hard to put down. Narration is excellent. I know I will listen to it again in the future, so it is a credit well spent.

The person who read it is amazing.

The person who read is amazing. He could read me a tax book and I would still enjoy it. The book itself is also great.