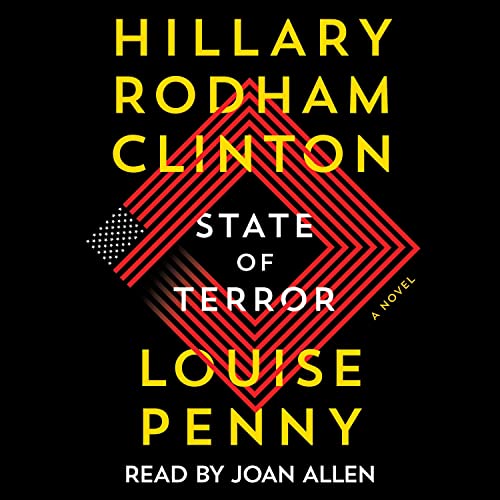 Named one of the most anticipated novels of the season by People, Associated Press, Time, Los Angeles Times, Parade, St. Louis Post-Dispatch, The Guardian, Publishers Weekly, and more.

From the number one best-selling authors Hillary Clinton and Louise Penny comes a novel of unsurpassed thrills and incomparable insider expertise - State of Terror.

After a tumultuous period in American politics, a new administration has just been sworn in, and to everyone’s surprise the president chooses a political enemy for the vital position of secretary of state.

There is no love lost between the president of the United States and Ellen Adams, his new secretary of state. But it’s a canny move on the part of the president. With this appointment, he silences one of his harshest critics, since taking the job means Adams must step down as head of her multinational media conglomerate.

As the new president addresses Congress for the first time, with Secretary Adams in attendance, Anahita Dahir, a young foreign service officer (FSO) on the Pakistan desk at the State Department, receives a baffling text from an anonymous source.

Too late, she realizes the message was a hastily coded warning.

What begins as a series of apparent terrorist attacks is revealed to be the beginning of an international chess game involving the volatile and Byzantine politics of Pakistan, Afghanistan, and Iran; the race to develop nuclear weapons in the region; the Russian mob; a burgeoning rogue terrorist organization; and an American government set back on its heels in the international arena.

As the horrifying scale of the threat becomes clear, Secretary Adams and her team realize it has been carefully planned to take advantage of four years of an American government out of touch with international affairs, out of practice with diplomacy, and out of power in the places where it counts the most.

To defeat such an intricate, carefully constructed conspiracy, it will take the skills of a unique team: a passionate young FSO; a dedicated journalist; and a smart, determined, but as yet untested new secretary of state.

What listeners say about State of Terror

Turn up the speed!

I started this book with narration at 100% and was appalled that the great Joan Allan's voice just about put me to sleep. When I sped it up to 110% I finally got the beat.
This is a really good book ... lots of action, good characters and a riveting and addictive story. Glad I got it!

The most gripping novel I’ve ever read

I bought this book because I love Louise Penny’s writing and she did not disappoint! The story details could only have come from an insider and boy, were they realistic. Could not put this book down, binge read it. So taut and compelling. I sure hope the world never comes to this point but one can see how it could. Brava to this dynamic duo.

Had to listen to in one go. Loved that it was so fast moving. Wanted to hear what happened next.

As a fan of Penny's Inspector Gamache novels, I had to read this as soon as it came out. Clinton's influence lends a terrifying realism to the political intrigue. I thoroughly enjoyed the thinly veiled references to various people, and recent events. I didn't think it was as good as the Gamache books, but I'd definitely read a sequel if there is one.

This book has kept me on the edge of my seat for two days! Great story, lots of tension and suspense and narrative drive. I couldn't guess who was the good guy until the very end- quite satisfying to be repeatedly tricked! I loved the narrator, too. The voice and narration sounded like a woman of age and experience, like the title character of the book.

Impossible to ignore the political cloud cover, but I will just mention that I think she went easy on the Ex-P. It could have been much much worse and still have been a truthful and accurate picture. Also, I feel like howling with rage and regret at what we missed when we missed the chance to have this strong smart woman at the helm.

Granted, I’m only several minutes in, but I already find the background hiss in the recording annoying. The story seems interesting, and the performance is fine so far, but seriously, you need a sound engineer who knows how to properly process these files.

Surprisingly well written, State of Terror is a mesmerizing tale of national intrigue and terror— both international and domestic. The characters are thinly veiled; the domestic terrorism threat all too real.
A fictional story of a Secretary of State by a former Secretary of State establishes a credibility about terrorist threats to the United States. The book rings all too true in its handling of domestic terrorism. The fictional leap to an attempted domestic coup by alt-right extremists can be too easily envisioned. In this case fiction seems to be a credible warning to America.
Hillary Clinton and Louise Penny wrote a great thriller. It more than lives up to the standards of the genre. It has an essence of foreboding.
Hillary Clinton has proved a lightening rod in the nation’s cultural divide. Nonetheless, State of Terror is a great read.

Didn’t get beyond first few chapters because didn’t like reader.

I am a fan of Louise Penny and was looking forward to great prose. I am so glad I didn't buy the book, at least on audible I could fast forward through all the wonderful things the Sec'y of State, her smart daughter, and her ever faithful friend were plodding through. I expected so much more.

Hear the words and think

I am appreciating this book. Authors and reader has been doing such good works. Suspend your politics.

Wow! What a Story!

Ms. Penny and Secretary Clinton kept me on the edge of my seat throughout this story on conspiracy in our government. This is a book of fiction with warnings of probable truths regarding threats to our democracy. I won’t forget the message and look forward to the next book!

way to white wash the events of sec. of state.
not a great listen.
the Narrative was awesome

Having seen HRC interview Louise Penny a long while ago I wasn’t shocked they collaborated and, having read every Gamache, I couldn’t wait to read. I did not have a clue as to the story line and in the opening chapters was immediately disappointed with what I thought was the obviousness of Ellen’s background, her job, and pointed criticism of the former administration. I could feel no Louise and was despairing over what the critics would do with the ( former president) Dunn- bashing. And, although Joan Allen is a fine actress, I missed the multiple accents and inflections my favorite voice actors bring to a book. I desperately wanted to return to Three Pines.

And then the story kicked in. And I just couldn’t put it down. So 5 stars for holding my attention in a genre I stopped paying attention to years ago; for suspending my disbelief while keeping so many balls in the air at a pace that wouldn’t let me get bored or leap ahead; for scaring the you know what out of me. I forgave the ‘obviousness’ because it is a story that needs to be heard. With better narration!

Amazing. Fantastic. An ABSOLUTE MUST READ

Wow. Hillary and Louise hit an out of the park home run with State of Terror. It was a real spy thriller with the competent Secretary of State leading the charge to eliminate the threat of terrorists and sedition to the US government. A definite winner. I can’t wait for #2!!!