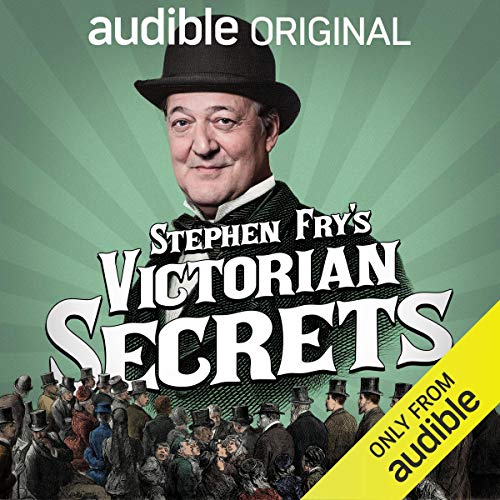 Peer Into the Past

I would of gave 5 stars overall but it irritated me that there was no way to have the episodes play consistently. Instead of continuing to the next episode as if it were the next chapter, it comes full stop and you have to fart around to get to the next one. A playlist option would be nice so I dont have to drop what I'm doing to queue the next up.

Stephen Fry could narrated someone killing me and I would still enjoy it. This was a fun and interesting look into the Victorian era and the secrets they tried to keep. I hope they make a second part.

I really enjoyed this. Fun to listen to and interesting. I hope for more like this in the future.

A Charming Series on Victorian History

As usual Stephen Fry brings his unique charm and storytelling skills to this series. I have a great love for Victorian history and this was fun, informative and educational. I have recommended this too so many people.

An absolute delight to listen to. Fascinating and surprising, made all the better by the exquisite narrative skills of Stephen Fry

To: the multiverse. Thanks for Stephen. ❤️: humans

Loved every moment. Is he a knight? I don’t know how or why people are knighted but if Fry isn’t a knight than knighthood is a Faustian and unimportant trifle. I wish he was Canadian so I could conceivably imagine bumping into him in the street.

Stephen Fry, as always, delivers an exceptional performance, narrating with warmth and intelligence. The writing is excellent. Each episode is structured to show a facet of Victorian life that was previously "unheard of" - certainly things you don't think of when thinking about the allegedly proper Victorians. Several of the episodes have led me to do further research on my own, and also to check out some other fascinating books and TV shows/films (e.g. Gentleman Jack on HBO). Absolutely loved this and wish there was another series!

Made it through 2-3 episodes before having to shut it off. Unless you like your history told from a the perspective of utterly blind colonial arrogance and a lens so white washed it clouds any real or balanced interpretation of historical events, look elsewhere. The Victorian era was a fascinating period of history and flux that obviously greatly influenced modern Western culture, but I may have expected too much of Fry in hoping he could turn a more critical eye on the period's darker impacts, including its violent oppression of foreign cultures, blatant racism, classism and sexism towards its own citizens, and hypocritical moral purience. Clipping out the negative parts of a nation's past isn't history Mr. Fry, its self-serving fiction. As a member of Canada's First Nations, who's people suffered greatly from British imperialism, much of which occurred during the Victorian era, I'll take a pass.

definitely would recommend to a friend

What more can you ask for? I loved it! I do hope there's a follow up planned.