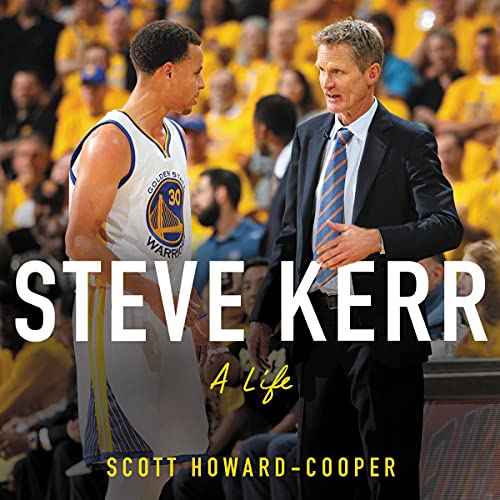 Written by: Scott Howard-Cooper
Narrated by: Roger Wayne
Try for $0.00

The definitive biography of Steve Kerr, the championship-winning basketball player and head coach of the record-breaking Golden State Warriors

Few individuals have had a career as storied, and improbable, as Steve Kerr. He has won eight NBA titles - five as a player and three as a coach - for three different franchises. He played alongside the best players of a generation, from Michael Jordan to Shaquille O’Neal to Tim Duncan, and learned the craft of basketball under four legendary coaches. He was an integral part of two famed NBA dynasties. Perhaps no other figure in basketball history has had a hand in such greatness.

In Steve Kerr, award-winning sports journalist Scott Howard-Cooper uncovers the fascinating life story of a basketball legend. Kerr did not follow a traditional path to the NBA. He was born in Beirut to two academics and split his childhood between California and the Middle East. Though he was an impressive shooter, the undersized Kerr garnered almost no attention from major college programs, managing only at the last moment to snag the final scholarship at the University of Arizona. Then, during his freshman season at Arizona, tragedy struck. His father, Malcolm, then the president of the American University of Beirut, was assassinated in Lebanon by terrorists. Forged by the crucible of this family saga, Steve went on to chart an unparalleled life in basketball, on the court and on the sidelines.

The only coach other than Red Auerbach to lead a team to the Finals five consecutive seasons, Kerr seems destined for the Basketball Hall of Fame. Steve Kerr is his incredible story, offering insights into the man and what it takes to be - and make - a champion. Drawing upon Scott Howard-Cooper’s years covering Warriors, deep archival research, and original interviews with more than one hundred of the central characters in Kerr’s life, this is basketball biography at its finest.

What listeners say about Steve Kerr

I feel compelled to write a short review because it is a new release and another review went on with complaints about politics as if the subject’s beliefs were jammed down the reader’s throat. This is not the case. Some political discussion is had at the end of the book because politics are important to the subject of this biography, and well that’s how biographies work. If you can’t stomach listening someone else’s political views in a biography of that person for 5% of the book, then maybe this isn’t the book for you. Very few biographies will be for you.

If you want a well written and well read bio of someone who has been instrumental on a few of the greatest NBA teams over the last 30+ years, then you will enjoy this. Steve is also an extremely interesting person with experiences sufficient to fill multiple lives. Highly recommend to any basketball fan.

Amazing to learn how many times his career almost came to an end and how his philosophy and drive kept it going.

I was looking for a more gripping story about a man who has had an amazing life. But it is marred with too many statistics that take away from who Steve Kerr is. But my biggest complaint is the narrator’s inability to correctly pronounce the name of the key player in Kerr’s coaching years! Stephen Curry’s name is pronounced “Stefan” not “Steven.” It was mispronounced twice in the book! Where were the audio editors who should have caught this and corrected it? Obviously, the narrator is not a basketball fan or he would’ve known himself how to pronounce Curry’s name correctly. After all, he’s just the best shooter ever! So disappointing!

Politics was not necessary.

I enjoyed Kerr's story; but his political rants are disappointing. The NBA's position concerning the conservative thoughts in this country is the reason I have stopped watching the games.