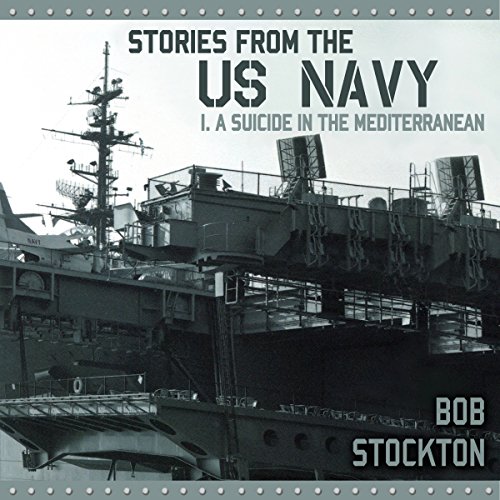 Stories from the US Navy: I. A Suicide in the Mediterranean

Written by: Bob Stockton
Narrated by: Ernie Sprance
Try for $0.00

Radarman Second Class Zack Martin finds himself with time for reflection while taking a smoke break on a moonlit early morning aboard a Navy aircraft carrier. He'd prefer to be almost anywhere else than aboard a "damned bird farm" crossing the Gibraltar Strait. The veteran sailor is not happy and longs to find a way to get back to destroyer duty in the Pacific.

The trick will be to accomplish that without sinking his Navy career. Carrier sailors find it challenging to transfer back to the surface fleet, and an ensign fresh from training who is bursting with self-importance isn't helping matters. Yet, another bungled job by a shipmate leads to a life-altering decision by the brass and, before long, Martin may have the opportunity he's always wanted. In hindsight, however, he might have wanted to stay right where he was.

Drawing on author Bob Stockton's 20 years as a Navy man, Stories from the US Navy: I. A Suicide in the Mediterranean puts listeners in the heart of the action aboard an aircraft carrier and its dedicated crew.

Now considered fully disabled because of exposure to Agent Orange while in Vietnam, the Trenton, New Jersey, native makes his home in Jacksonville, Florida, near his three children and three grandchildren. This novella is the first in a series of three Bob hopes to publish by the end of 2014.

What listeners say about Stories from the US Navy: I. A Suicide in the Mediterranean