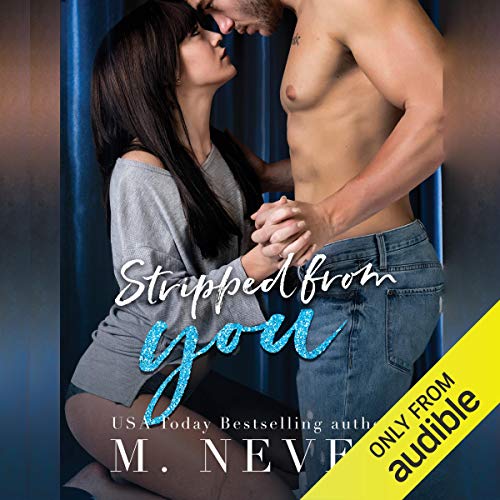 "It doesn't matter how many women touch this body, only one woman has ever touched this soul."

Ryan Pierce doesn’t come from much, doesn’t ask for much, and doesn’t expect much. And he's come to accept that, until, Alana Remington. Alana is the girl who struck the match that lit his world on fire. She's the girl who opened his eyes to more. Who made him believe that just because you have nothing, doesn't mean you are nothing. And he loves her fiercely for it. But, just because you come together, doesn’t mean you stay together. One fateful decision rips Ryan and Alana apart and neither of them are ever the same again. For five years he's regretted that decision, but the deep-seated anger, shame, and resentment has kept him from reaching out. And over those five years, a series of moments have spun Ryan's world in a direction he never saw coming. A world ruled by endless nights, infinite women, and the name Jack the Stripper.

A world, unbeknownst to him, that may just let two severed hearts collide.

What listeners say about Stripped from You

I loved every moment of this book! M. Never is fast becoming my favorite author. The way this author tells a story is sublime. So detailed and emotionally breathtaking. I truly felt every emotion that the characters were going through. And, can I just say that I would love for Jacob Morgan to narrate my life. He is so natural and brings so much depth to the character. Excuse me while I go listen to this story again. Right now.

This book is awesome, absolutely fantastic. There's a cliffhanger which I don't always like but so very good. Jacob Morgan is unbelievable talented and as usual did a great job. Brooke Bloomington didn't start her narration until the very last chapter but she sounds great. I absolutely can't wait for the conclusion of this series. My first by M. Never and has good. I am infatuated with Jacob Morgan. This is in my top 10 books and I've listened to hundreds.

I went into this book a little skeptical but was pleasantly surprised by it. Jacob Morgan definitely made this book top notch for me. I totally felt his anger, pain and love. I absolutely love his reading. The story had more depth to it then I initially thought and I am glad it did. I will definitely be listening to the continuation of this story.

She's blonde so why does the cover have abrunette?

Great story! Funny, different and heart felt. But why is there a brunette female on the cover when she's a blonde? huh?? Lol

I liked this audio and will listen to the next one since its a cliff hanger. And the next one is romance package. But this one took quite a while to get going. Narration is fantastic as always from Jacob morgan and brooke b!!!

great book.  I really enjoyed reading this book and look forward to reading more by this author.

I read the reviews after listening.. I can't believe there are so many negative comments. I think the book was wonderful. The story was heartfelt. I felt all the emotions. I always feel Jacob brings his A game to every story he Narrates. He makes the books come to life for me. Can't wait to start #2 !! A+++

I hate cliffhangers but I have to know what happened. this book was awesome and took me by surprise. Great narration

Slowly built, slow to draw you in, a little cheesy

Starts out as young love and it's 2 people who are on different side of the tracks. Ryan's brother and mother are addicts and Ryan is also a twin. His brother Sean uses Ryan's identity when he is arrested with heroine. He doesn't go to court. So when Ryan is stopped for a traffic violation, he is hauled off to jail for the warrant and pleads guilty to save his brother who is bipolar and an addict from being in jail. BUT - he loses his dream job and the girl. Alana has no clue what happened. Fast forward about 4 years and Ryan is a male stripper at a fancy club making good money when, but still in love with Alana. And guess who walks into the club. Sex scenes are not memorable and the heavy drinking and giving drinks to minors was a little off putting, but it's a cute story - so far.

Loved this book! Jacob Morgan should win an award for his emotional range in narrating Ryan’s dialogue and inner turmoil. I rewound and replayed certain parts just so I could immerse myself again in Jacob’s phenomenal expression of Ryan’s feelings.

If you want to read for a HEA then you don't want to read about people with parents like this. No! Don't read this story!