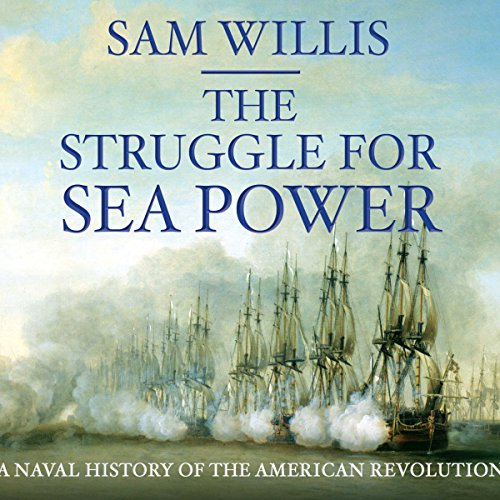 Written by: Sam Willis
Narrated by: Derek Perkins
Try for $0.00

The American Revolution was a naval war of immense scope and variety, including no less than 22 navies fighting on five oceans - to say nothing of rivers and lakes. In no other war were so many large-scale fleet battles fought, one of which was the most strategically significant naval battle in all of British, French, and American history. Simultaneous naval campaigns were fought in the English Channel, in the North and Mid-Atlantic, in the Mediterranean, off South Africa, in the Indian Ocean, in the Caribbean, in the Pacific, in the North Sea and, of course, off the Eastern Seaboard of America. Not until the Second World War would any nation actively fight in so many different theaters.

In The Struggle for Sea Power, Sam Willis traces every key military event in the path to American independence from a naval perspective, and he brings this important viewpoint to bear on economic, political, and social developments that were fundamental to the success of the Revolution. In doing so, Willis offers valuable new insights to American, British, French, Spanish, Dutch, and Russian history. The result is a far more profound understanding of the influence of sea power upon history, of the American path to independence, and of the rise and fall of the British Empire.

What listeners say about Struggle for Sea Power

Fills in a great historical gap

This book is an excellent review of the naval situation at the time of the American War of Independence. It ably demonstrates the complexity of the circumstances and how the European maritime powers combined to support the American bid for independence, hoping to secure their own objectives.

The author also shows an understanding of seapower and seamanship that is rare in books of today.

This book explores aspects of the American Revolution not addressed in most American curricula. I can only wish that it had been longer and more detailed...

A great book on a little known subject

This book is well worth reading if one is interested in naval history, especially that of the American Revolution.

I hung on every word in this Audible book. The narration was great as is expected from Derek Perkins. To me,, this book widened the lens on the events just before and during the American Revolution. The scale and scope of everything I once understood increased or expanded significantly. Like going from 35mm to IMAX. The American Revolution once bored me (for whatever reason). Well not anymore. I plan to read (or listen to) considerably more histories on the time period because of this book. I bought the next Sam Willis book and look forward to his other works.

An Important but misunderstood topic,

Book is very good on the political, diplomatic and strategic importance of sea power from the American point of view. Not so good on technical and tactical detail. There is a lot of both technical and tactical information regarding naval weaponry and their application as well as tactics in the age of sail, so its hard to understand how badly he get tactics and weaponry wrong. On the other hand he quotes from primary sources when discussing the political, diplomatic and strategic ball of wax which are all so intertwined, that it is impossible to separate out with a lot of fresh information.

Loved this book. The focus on the small details that effected the big picture was not too dry. Having never read much about this period of naval history, I was surprised that I enjoyed it as much as I did. I listened to the book twice and enjoyed it more the second time.

Definitely not taught in BigFedGov schools

A fascinating read the beginnings of our Navy how the American revolution, fought on many fronts in multiple parts of the world.

As an avid reader of naval history, I found this book to be superb. I look forward to reading anything this author writes in the future.

I learned much especially since the author presented a global perspective of the war. I was amazed to learn of the foreign powers involved around the world.

I was really looking forward to this book based on the subject matter. I could only make it through the first 2 chapters before I quit. The narrator was not good and the book was putting me to sleep. Not worth the credit spent.