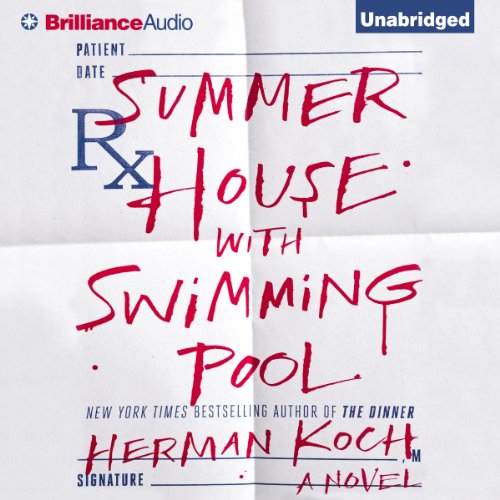 When a medical procedure goes horribly wrong and famous actor Ralph Meier winds up dead, Dr. Marc Schlosser needs to come up with some answers. After all, reputation is everything in this business. Personally, he’s not exactly upset that Ralph is gone, but as a high-profile doctor to the stars, Marc can’t hide from the truth forever.

It all started the previous summer. Marc, his wife, and their two beautiful teenage daughters agreed to spend a week at the Meiers’ extravagant summer home on the Mediterranean. Joined by Ralph and his striking wife, Judith, her mother, and film director Stanley Forbes and his much younger girlfriend, the group settles in for days of sunshine, wine tasting, and trips to the beach. But when a violent incident disrupts the idyll, darker motivations are revealed, and suddenly no one can be trusted. As the ultimate holiday soon turns into a nightmare, the circumstances surrounding Ralph’s later death begin to reveal the disturbing reality behind that summer’s tragedy.

Featuring the razor-sharp humor and acute psychological insight that made The Dinner an international phenomenon, Summer House with Swimming Pool is a controversial, thought-provoking novel that showcases Herman Koch at his finest.

Months ago I finished this novel, attempted to review, but my fingers hovered over the keyboard and my head felt scrambled -- the condition is called being *dumbstruck.* As a reviewer wrote, Summer House is "uncommon" and if you read Koch's previous novel, The Dinner, you know the author has a blunt-force style that is anything but common. He is out of the box, out of bounds, and you need to brace yourself for a style that might leave you a little dumbstruck. It's not that he is offensive -- he is completely unique and captures his characters in sticky icky situations, at the edge of civility, then pushes it to places we hope we are incapable of falling to ourselves.

Subject matter is borderline, of course, it's Koch, and if just hearing *lecherous older men and barely-into-their-teens young girls* already has you grimacing -- not your book because that is just the beginning. (I had to keep in mind that nude sunbathing and swimming is de rigueur in some cultures.) Throw in lots of alcohol, a doctor that is repulsed by the human body, adultery, rape, and nude frolicking on the beach... it's gritty and uncomfortable (like getting sand in places usually covered by your bathing suit). And as if it isn't already prickly enough, there are plenty of moments where you shouldn't be laughing, but you are...that watching someone stumble and ride down the stairs laugh. Koch connects with a part of us that some of us don't want to know is there, and that is what is the most discomforting.

Koch is a good writer and does what he sets out to do well. He keeps you engaged even when it's uncomfortable -- but so does an electric fence. I occasionally like a book where I am expected to boo and hiss the bad guys -- it's all good fun. But, I think Summer House crossed MY line by featuring too many taboos. In the end (and what about that end??-huh?) I recognize the author's uniqueness and talent, but Summer House "enriched me not" and left me feeling almost guilty, "poor indeed." If you think you have the mental fortitude, you don't have bouts of depression triggered by icky situations, you love to hate the characters and dark deeds, don't mind sand in cracks...this may be your book.

I am all over the place with this one!

I ADORED “The Dinner” I am in love with the writing style so when I saw that there was another English language book by the same author I bought it right away without reading the synopsis.

This book really made an impression, but perhaps not for the right reasons! The plot was interesting, I liked the story, but his I think his descriptive writing style is a little too good – it’s so shocking and jarring!

There is so much distain and revulsion and negative energy in the main character that it’s sometimes hard to read! He makes you feel dirty and off-center; he’s so unlikable and his thoughts are so disturbing. His thinking is so sick and detestable it makes you wonder why you’re still reading, yet you do because you’ve never read anything like it before and you’re genuinely curious to know where it will lead. A little like watching a train wreck.

Perhaps because this was an audio-book I was extra disquieted because I was actually hearing someone vocalize the thoughts – actually saying the words; I think that had a bigger impact.

Personally, I was let down by the ending but the ride was so “different” that I didn’t mind. I’d love to read another book by the same author, but honestly I hope it won’t be as alarming!

Wasn't sure where it was going...

This is my first novel by Herman Koch. I had no idea where it was going. But I'm glad I hung in there. The first half was slow... painfully. It was kind of like American Psycho goes doctor without the blood and chainsaws. But in the end it's a story of a sad broken family, lead by a narcissistic, scary physician.

It pains me greatly to be giving this book only 2 stars, because I think Herman Koch is a brilliant writer. In the first several chapters alone, I found dozens of passages that were flat-out genius, such as the section where he lampoons the myriad abuses to which Shakespeare’s plays are subjected by small theater companies. But I have decided to give up reading this novel after Chapter 13 for a highly personal reason: too many nitty gritty, nasty details about the human body and medical conditions. As in his previous novel, “The Dinner,” the author treats the reader to a stream-of-consciousness from within the head of the protagonist. In “Summer House,” the main character is a doctor, and when his mind goes off-topic, he nearly always reflects on the gross things a doctor has to see and do during the course of a day seeing patients. Because Koch is such a good writer, the descriptions are quite realistic and cringe-inducing, which I surmise is exactly the reaction Koch is looking for, but it is too creepy for me. If you can get beyond this “ick” factor, you may enjoy the book, but if you, like me, can barely watch an episode of “CSI” without getting grossed out, you may want to skip this book.

But this is where the archetypes end. The protagonist is a physician, a cynical general practitioner with a dissonant loathing for the human body; his remarks about office visits by the "typical" patient are filled with negative energy and his self-deprecation for not being "good enough" to sign on for four + more years of med school in order to specialize are recounted in detail.

Mix this up with a family vacation with his actor friend and his family, two beautiful (aren't they always?) daughters and there follows a series of potential disasters. Lots of near-nudity by the pool and at the beach, bikini bottoms that nearly fall off, body contact during casual ping-pong games and just general older man-teenage girl lust.

This novel would have seemed clichéed and overdone if it were not for the primary character's voice and dark vision of life, coupled with a vaguely-described precipitous event befalling one of the daughters. She has nothing to say about what actually happened and she continues her life "sadder but wiser" as the saying goes. We never find out just exactly what happened but we can all guess. The doctor's quest to find the perp after this summer seaside idyll dominates the rest of the story.

My only issue with this novel is the lack of geographical grounding. We know the doc is living and practicing somewhere in Holland but that's as far as it gets. The sense of place, with shops and restaurants, museums, scenery, architecture, weather, people-watching, etc. is missing, and there is no concept of a particular locale that could act as a backdrop for the action, if not be present as an additional character.

Narration is perfect, the voice very neutral but age-appropriate

This book does not follow any typical story line nor any customary resolution, and that's why it gets five stars.

I have already read The Dinner by Herman Koch which I enjoyed so lead me to read this. This book was very well written and observed. Unfortunately the characters, although they may be realistic, were so unlikable that I found it hard to root for anybody. It would have been nice to have felt sympathetic towards at least one character.

Even better than The Dinner

What did you love best about Summer House with Swimming Pool?

None of the characters were "good" people, except the youngest daughter and Judith's elderly mother, Vera. Some characters were just less bad than others. The narrator's judgments of other people are all too human, as is his tendency to suspect everyone. There's an old saying: the thief gets your gold, but everyone gets your distrust. But the protagonist's and his wife's unanimous, unshaken instinct to close ranks and protect their children, without blaming each other, is heartening.

I really didn't like any of them very much, although I could identify uncomfortably with several. Again, with the exception of the youngest child and the oldest woman, who were likeable, but not leading characters; and yet I couldn't put this down.

So much of the novel is introspection and retrospection, and Berkrot "became" Dr. Schlosser's inner voice for me.

A Season of Guilt.

The idea of culpability on the part of the victim is a very, very touchy subject. Koch has managed to handle the issue with rare delicacy. As in The Dinner, he gives us glimpses of the less-likeable parts of the adolescent psyche.

Over the top for me. Makes me shudder.

This narrator did an excellent job portraying a truly loathsome individual. If the author's purpose was to make you despise the main character, he has succeeded admirably. I've made it through three and a half hours and I'm not sure I'll go further. Perhaps having grown up with relatives who were similarly nasty, mean, negative and hateful has colored my outlook. I don't need to reminded of the damage and destruction which this type person can inflict. On the positive side, listening to this book does remind me of the many kind and wonderful people there are.

It's tough when you can't find any redeeming values in the main character. His distaste for his patients got irritating.

The book was hard to finish- perverted and disturbing. The plot was weak and there was no resolution.