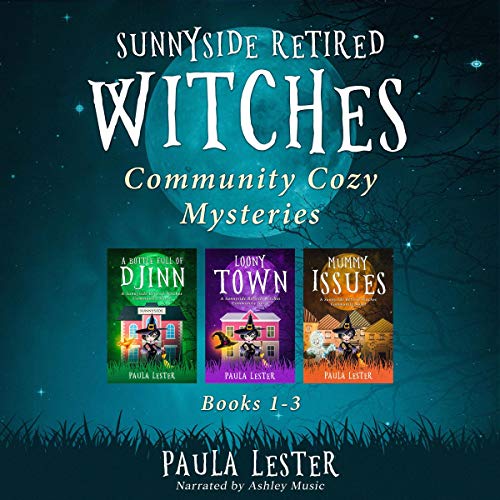 Written by: Paula Lester
Narrated by: Ashley Music
Try for $0.00

Zoey Rivers has an unusual job. She's the Chief of Staff at a retirement home, which doesn't sound odd on its own, but when you consider it's a retirement home for witches and other paranormals, the strange factor ratchets up.

Then, you add in some crime capers or even a murder or two and a dozen or so retirement home witches wanting to help solve it, and things can get downright crazy.

Book 1: A Bottle Full of Djinn

Zoey Rivers has a pretty great job as Head of Staff at Sunnyside Retired Witches Community. She's good at handling the magical messes that are part and parcel of providing a home for elderly (and some slightly senile) witches.

But when the messes turn from slightly sloppy to hugely horrible, Zoey realizes there's more involved than just her residents.

If she doesn't figure out who's causing havoc at the Home, the place might not be standing for much longer.

If you love crime capers with magic, mayhem, and mystery, you'll adore Zoey Rivers and her comical crew of witch retirees.

Please note: This book is a crime caper, not a murder mystery.

Caring for elderly witches at the retirement home in Sunnyside, California is a full-time job for Zoey Rivers. But when one of them is blitzing, causing magic to act even weirder than normal, things get...well, downright wacky.

And when a local insurance agent winds up dead, some of the people Zoey is responsible for become the prime suspects. As the zaniness of the magical blips continues and things get crazier and crazier, Zoey has to work fast and try to stay one step ahead to keep her charges out of jail, figure out who is causing the chaotic blitzing so she can fix it, and also figure out who the real killer is.

It’s a tough job, but she's determined to do it. The people who live at Sunnyside Retired Witches Community are counting on her. And she’s not about to let them down now.

Sunnyside Retirement Witches Community gets its fair share of visitors. Some of them like the entertainment and others enjoy volunteering. But when one of the sight-seers ends up dead, Zoey Rivers has to figure out what happened.

The residents come up with a fantastic idea: Since the retirement complex seems to have more than its fair share of murders, they figure it might be a good idea to have a psychic on staff.

So, Zoey hires Iris. And all the information she pulls from the ghosts of the growing list of victims points to Zoey herself as the most likely culprit.

This collection is funny. The characters are cute while being a little sassy.The narration is the best I've heard in awhile. The story has twists so you just want to know what happens next.I actually finished this collection in two sittings. If you like cozy mysteries or want to see what they're like this is a great story for you.

what a fun series of books! mystery stories with a supernatural being. you're going to love this wacky group of characters and their mishaps! very well written, it hold me in almost immediately. you do fall in love with the characters oh, and the story is very easy to get engrossed in. Ashley music does a good job at narrating the series up books, getting life to the story that made it easy to imagine and envision what was going on. You are definitely not going to regret listening to these books!

Fun mystery to listen to

Listening to Zoe's story while managing the Retired Witches Community was fun. Zoe found herself solving mysteries that occurred in, on or around her facility. This will not disappoint you. I received a copy for an honest review.

I found Sunnyside Retired Witches Community to be an extremely enjoyable listen. I thoroughly loved Zoey and all of the elderly residents. Zoey is constantly kept busy keeping the elderly residents out of mischief.
The narrator did a great job voicing each of the characters.

The stories were a lot of fun. I loved the quirky retiree magic users and their eccentricities so much. They felt like real people and they had some hilarious quirks. I loved the magic system and how the characters interacted with each other. Each story had a good plot and the mysteries were fun to solve. I hope to get more fun stories in this retirement home and these characters. The different super natural creatures in the story were a lot of fun and each character felt like an actual person.

Cozy Mysteries With A Twist

This is the first three books in the series about Zoey Rivers who is the Chief of Staff for a retirement home. The interesting thing about this retirement home is that it is a place for witches and other paranormal beings. The series is fun, wacky, and unusual as Zoey and her friends puzzle through each mystery presented in each of the books. I enjoyed the series and recommend it to others who enjoy lighthearted and magical cozy mysteries. Ashley Music's narration is great as she provides various voices for the different characters and this adds to the enjoyment of the story. I was given a free copy of the audiobook and I have voluntarily left this review.

With the exception of subject matter, i.e. retirement home, the writing style feels like it's aimed at 10-13 year olds. It's okay, but not something that really grabs me. Narrator does an okay job too.

Ok. original approach to magical stories! love author's imagination. However, refused to listen to book three as it dealt with a demon. unacceptable in my world, i dont believe we should be giving our minds over to demonic anything, no matter how disguised in simplicity it may seem. If this person's opinion counts, stay away from it like it is poison!

Easy to listen to, good for background entertainment while doing something else.
The characters were ripe for more humor than was offered, but overall an okay series.

very big struggle to listen. the reader was very lackadaisical. every character was annoying.