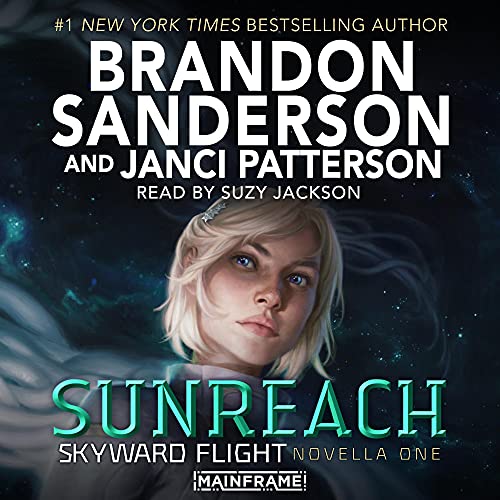 From number one best-selling author Brandon Sanderson and Janci Patterson comes the first of three Skyward series novellas, each told from the perspective of a different member of the team back on Detritus. Listen to FM's story between Starsight and Cytonic.

When a planet-destroying Delver suddenly appears in the sky of Detritus and vanishes just as suddenly, FM knows that the last free human society got lucky. Her Skyward Flight companion, Spensa, figured out how to draw this Delver away, but it won’t be so easy next time.

The forces of the Galactic Superiority will be back - and if the Defiant Defense Force can’t figure out a way to escape the planet, humanity’s destruction is only a matter of time. Spensa’s mission to infiltrate the Superiority unveiled the secret to their hyperdrives - a cytonic slug species called the Taynix. Now FM’s flightleader, Jorgen, has found a large group of Taynix hiding in the caverns far below Detritus’s surface.

FM and Jorgen must work together with the engineer Rig to awaken the mysterious alien Alanik and unlock the powers of the Taynix, or humanity will be trapped. With Spensa’s friend Minister Cuna of the Superiority stranded at the outpost of Sunreach, they need to figure out how to rescue them - or the Superiority government will be in the sole clutches of those who want to wipe out Detritus once and for all.

A Kirkus Reviews Best Book of the Year

"Startling revelations and stakes-raising implications...Sanderson plainly had a ball with this nonstop, highflying opener, and readers will too." (Kirkus Reviews, starred review)

"With this action-packed trilogy opener, Sanderson offers up a resourceful, fearless heroine and a memorable cast." (Publishers Weekly, starred review)

"It is impossible to turn the pages fast enough." (Booklist)

What listeners say about Sunreach

Catching up with the rest of skyward flight was honestly one of the only major things I really missed a lot in Starsight.
To me this feels insanely well crafted it feels exactly the same as if Brandon wrote it himself and the story was amazing it really was a great thing while waiting for Cytonic.

This story continues to blow me away at every turn and the narration is superb!

This book was a great story to fill in some background story until we get Cytonic in a few weeks. It added some essential information for the whole story. 🌟

All the skyward books have been fun, and this novella just adds. Brandon Sanderson managed to fit elements moving the plot and several characters forward. Not to mention having some complete subplots and some excellent character development. It makes me even more excited for the next Skyward novella and the next full book as well. Great listen.

I am looking forward to the other novellas this autumn before Cytonic comes out. So far so good.

Shh... I'm a grandfather and love epic fantasy, but I confess that my favorite Bandon Sanderson series is Skyward. The characters are all epic, flaws and all.

I loved this Novella and it fills in an important gap in what is going on at Detritus while Spin is elsewhere. The primary character focus is from FM's point of view along with Rig. I loved the story and highly recommend the book. I can't wait until the next ones come out. Suzy Jackson is the perfect narrator for this series.

I want to point out one thing in specific that I was impressed with. This book feels just right. It fits perfectly with the other books and nothing seems out of place.

I was already hoping for the best and Janci totally delivered. I thought there might be places where I noticed a different flow and maybe it would cause the story to be disjointed or something but it’s been so well done, I just don’t know what to say. So good. I’m very impressed!

The one critical thing I could mention is that FM’s voice sounds like Spin from the previous books. I think the narrator should have listened to her own narration of FM a little more before recording this. It’s only mildly noticeable so, still 5 stars all around.

good to get back to Skyward flight

I spent a good half of a day listening to sunreach. Even though the book is co-authored it felt authentic and in line with both Skyward and Starsight. I enjoyed the character expansions, and the plot.
There were intense moments, moments that drove me crazy, and moments that made me laugh. definitely a fun read if you love the series and want something before Cytonic comes out.

That was a heck of a ride. I would highly recommend reading/listening to this before Cytonic or you may be lost. A lot happened in this novella.

This story followed FM as the humans tried to get the "hyperdrives" to work. This story mainly revolved around FM, Rig, and Jerkface. I enjoyed getting a bit more of FM's character, but don't feel quite as attached to her as others. The characters also didn't have quite the same feel as they did in books 1 and 2. I did enjoy the introduction of Gill and Chub though.

Favorite Book in the Series

I expected so much from this book and IT DELIVERED! Janci Patterson and Brandon gave even more than asked for. I was blown away by where this book started and where FM ends up. This book was a roller coaster that I could not get enough of.

FM is my new favorite POV and her arc was pure perfection. This book answered so many questions put forth in the first book, but leaves you with a thousand more questions.

Do Not read this novella before Skyward and Starsight, but please don't stop reading until you get to Sunreach. If you don't enjoy this then Brandon Sanderson in general probably isn't for you.

I will be suggesting this series to anyone 10 years old or above!

Not the Sanderson novel I’ve come to expect

I have read nearly every book that Brandon Sanderson has ever released, and this novella is not up to that caliber. You can tell that he provided a story framework but wasn’t the primary author.

This novella is less about the people on Detritus as it is about an eye rollingly pathetic teenage love story. Holding hands and blushing and “does he like me” nonsense. Honestly I’m not sure if I have any interest in reading the other Skyward novellas after this.

I actually had to listen to this one several times because the combination of boring, unnecessary romance, slug convenience, lack of character or location development, and weird pacing made it extremely difficult to pay attention. Other reviews mention that the narrator does not utilize her past rendition of FM but instead gives us Spin- I fully agree with this but think the writing also lends itself to that issue.
All in all, this felt rushed, poorly conceived, and far too expensive for the content. Other novellas from Sanderson have not had this problem so I'm wondering if it's a symptom of the co-writing. It's also frustrating that the story here seems very important to understanding the upcoming full novel, which makes the high cost seem like a money grab.
I'm disappointed.

And less realistic than the FTL space travel with slugs. 99.99% out of 100 the girl will pick the outgoing tall handsome jock. Not the nerdy nervous redhead. Don’t give these poor kids false hope.

Unfortunately, this was not as good as Skyward and Starsight.
You can tell that Sanderson wasn’t the main writer in this. The plot outline is interesting and has some cool ideas for the world, but the execution just isn’t as good.
The pacing is a bit off, not to mention the cringe worthy romance, and some of the dialogue felt very basic. There was a lot of telling rather than showing. Definitely more on the “young” side of YA.
Also the characters themselves felt somehow less fleshed out than in the previous books. Even though this one is specifically about FM, I felt like she had much more personality and was much more “FM” in the other installments than in this one.

However, the slugs plot is so appealing, they really make the whole book. And I do love the world and the overall development of ideas in this. It was a cute side note to the main books.
So. This wasn’t a bad book, it just wasn’t a Sanderson level book.

Hopefully Cytonic will measure up to the usual Sanderson standard.

This was such an amazing masterpiece and I absolutely love every minute of this adventure.