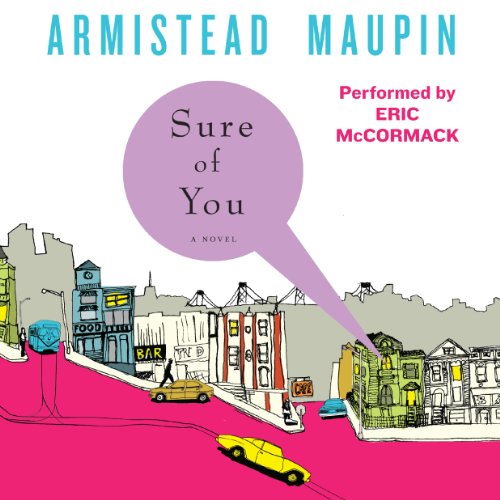 Written by: Armistead Maupin
Narrated by: Eric McCormack
Try for $0.00

Inspiration for the Netflix Limited Series, Tales of the City

A fiercely ambitious TV talk show host finds she must choose between national stardom in New York and a husband and child in San Francisco. Caught in the middle is their longtime friend, a gay man whose own future is even more uncertain.

Wistful and compassionate yet subversively funny, Sure of You is the pitch-perfect sixth novel in Armistead Maupin’s legendary Tales of the City series.

What listeners say about Sure of You

Who would you have cast as narrator instead of Eric McCormack?

Absolutely anyone. His performance was hands down the worst I have ever heard. He doesn't connect with any of the characters and some of his interpretations are border line offensive and always full on annoying. It was nails on a chalk board but since it's book 6 I had to finish it. I was literally wincing in parts, especially his Prue Giroux!!! Unbelievably horrible.

I love these books, and these characters, dearly. And I have to admit that this is why I soldiered through this one. Be warned: this is not a happy, feel-good book. It is dominated by hurt and anger. It is an emotionally difficult read. The characters seem weary and bitter, even jaded. You will ache on their behalf, throughout.

I have to say that McCormack is the best narrator yet. He glades between characters easily and helps craft the story with his vocal talents. A perfect choice!

One of the best books in the series

I really enjoyed this book. I think it is one of the best in the series. I do not agree with the reviewer who called the narration "the worst ever". On the contrary, I also find the narrator Eric McCormack to be excellent. His narration is lively, engaging and pleasant to listen to. Highly recommended.

Very good, I recommend listening to it on .08 or .09… Will will sound slightly drunk sometimes, but at least he doesn’t sound like he’s on speed.

As always, Maupin entertains with a great story. The narration is wonderful as well. thank you.

Well this is the last one of the original 6 in the series. Should be interesting how they change some of what’s all ready happened in the new series coming out on Netflix next week