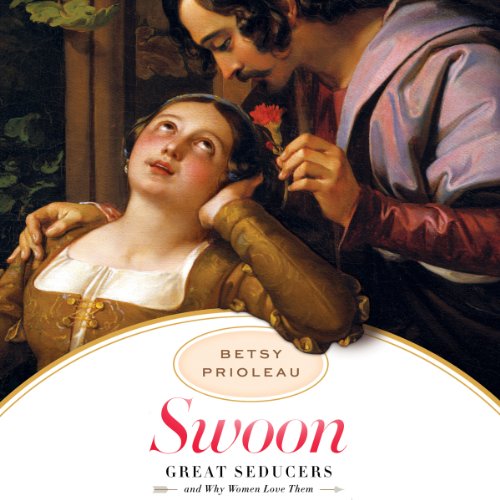 Written by: Betsy Prioleau
Narrated by: Holly Fielding
Try for $0.00

Swoon is a glittering pageant of charismatic ladies' men from Casanova to Lord Byron to Camus to Ashton Kutcher. It challenges every preconceived idea about great lovers and answers one of history's most vexing questions: what do women want?

With wit and erudition, Prioleau cuts through the cultural lore and reveals who these master lovers really are and the arts they practice to enswoon women. What she discovers is revolutionary. Using evidence from science, popular culture, fiction, anthropology, and history, and from interviews with colorful real-world ladykillers, Prioleau finds that great seducers share a constellation of unusual traits.

While these men run the gamut, they radiate joie de vivre, intensity, and sex appeal; above all, they adore women. They listen, praise, amuse, and delight, and they know their way around the bedroom. And they’ve finessed the hardest part: locking in and revving desire. Women never tire of these fascinators and often, like Casanova’s conquests, remain besotted for life.

Finally, Prioleau takes stock of the contemporary culture and asks: where are the Casanovas of today? After a critique of the twenty-first-century sexual malaise - the gulf between the sexes and women’s record discontent - she compellingly argues that society needs ladies’ men more than ever. Groundbreaking and provocative, Swoon is underpinned with sharp analysis, brilliant research, and served up with seductive verve.

What listeners say about Swoon

A grand tour of the greatest seducer's throughout history. I could not put the book down for a second. Interwoven in an engaging hypnotic wonderfully penned narrative, these enigmatic devishly seductive characters literally leap off the page. Betsy Prioleau has done an amazing job chronicling the incredible lives of these men. Entertaining as well as highly instructive for men and the women who find them addictively irresistible, "Swoon: Great Seducer's and Why Women Love Them" is an incredibly fun read. I truly enjoyed this book.

Narrator Holly Fielding breathes passion and a titillating sensuous flair of eroticism into the text that is simply irresistible. This is one title I'd highly recommend giving a try.....

Narrator mispronounces far too many words

I can't listen to any more. The book is well written but the narrator, Holly Fielding, mispronounces words about every 90 seconds. And then she begins outright malapropisms such as "two pendants on Borneo," when clearly it had to be two pedants" and, hilariously, when describing David Niven's straying, she says women "overlooked his defecations" instead of his "defections." Oh, dear! And Niven always seemed so elegant ... Don't audiobooks have ANYONE on hand to listen to the recording before it's released? Tragedy. Or do I mean travesty? Tapestry?

The narrator's voice is really hard to follow. It's as if she's in permanent seduction voice mode. The book is also pointless. What makes ladies' men what they are? It's just some innate skill they have, according to the book. What a waste.

it was great to listen to. I loved the information and can't wait to hear it again

The book is great, but the narration, mainly the pronunciation of several names and words, could be better.

He who walks with the wise will be wise

Excellent insights for the man who would be a lover. The subject matter expertise of the author is amazing! Should be required listening for all husbands present or future. Read to avoid the failure of Madame Bovary’s husband.

best enjoyed by the ocean

this book has taught me so many things....and the narrators voice just shows the passion behind the context.

Horrible narration. I returned it

The narrator constantly mispronounced common words. I couldn't stand to listen anymore, so I returned the book.