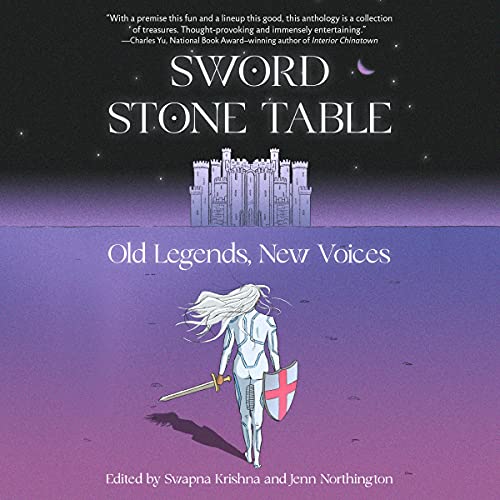 From the vast lore surrounding King Arthur, Camelot, and the Knights of the Round Table comes an anthology of gender-bent, race-bent, LGBTQIA+ inclusive retellings. Featuring stories by:

Here you’ll find the Lady of the Lake reimagined as an albino Ugandan sorceress and the Lady of Shalott as a wealthy, isolated woman in futuristic Mexico City; you'll see Excalibur rediscovered as a baseball bat that grants a washed-up minor leaguer a fresh shot at glory and as a lost ceremonial drum that returns to a young First Nations boy the power and the dignity of his people. There are stories set in Gilded Age Chicago, '80s New York, 21st-century Singapore, and space; there are lesbian lady knights, Arthur and Merlin reborn in the modern era for a second chance at saving the world and falling in love - even a coffee shop AU.

Brave, bold, and groundbreaking, the stories in Sword Stone Table will bring fresh life to beloved myths and give long-time fans a chance to finally see themselves in their favorite legends.

“Sword Stone Table is an anthology with a lot to say. It is an ambitious, thematically-sound anthology, with a robust central thesis. . . . A labour of love—a carefully-assembled ‘Round Table’ of eclectic creative talents all writing on one of fantasy’s most established tropes. This is a thematic anthology that doesn’t simply concatenate random stories, but has a lot to say as a text in its own right.”  —Jared Shurin, Tor.com

“This singular anthology will enchant with its bright, shiny new takes on medieval classics including more genders, more races, more eras, and more fabulousness than ever before.”  —Karla Strand, Ms. Magazine