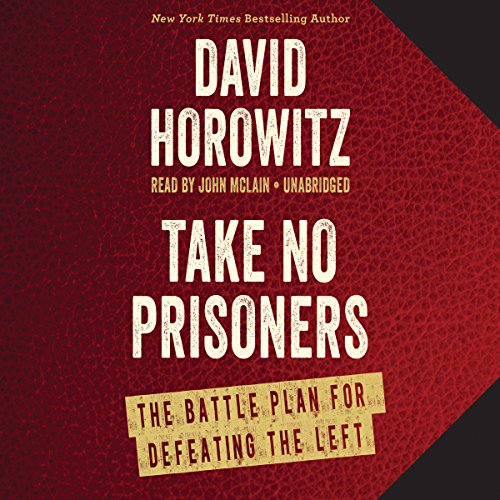 Written by: David Horowitz
Narrated by: John McLain
Try for $0.00

Battle-scarred political warrior David Horowitz says it's time for conservatives to take the gloves off - and take our country back.

America is at a crucial turning point in its history, and Republicans have been losing ground to Democrats for too long. In Take No Prisoners, Horowitz sounds a clarion call for conservatives to use liberals' take-no-prisoners playbook against them. From his days as a founder of the radical New Left movement in the 1960s to his storied career as a leading conservative activist, Horowitz has a lifetime of experience in battleground politics. Now he lays out a winning political strategy for the Right that can save the country from sliding into economic and social ruin.

If conservatives want a better future for America, they need to be able to beat liberals at their own game - and David Horowitz is telling them how.

What listeners say about Take No Prisoners

David Horowitz is a great explainer. Even if you know relatively little about history and politics, you will know that what he saying here is right. He is the rare smart person who can explain things in easy to understand language. And he's right. As someone who, like Horowitz, moved from left to right as an adult, I can tell you that the most immediate realization that followed conversion was understanding for the first time just how much "liberals" have a completely false sense of moral superiority. Horowitz attacks Democrats where they should be attacked: on their horrible record at improving the lot of black people and poor people in the last 50 years. He connects the dots in undeniable ways. He correctly diagnoses that Republicans have given Democrats the moral high ground on race, poverty, and education, which is completely upside down when measured against reality. Read this book.

Bonus: The book appears to have been mostly written between 2000 and 2014. While that might appear to be a disadvantage and make it dated, it actually has exactly the opposite effect. Hearing what Horowitz says as of 2014 is a very interesting prism through which to see Donald Trump's candidacy.

A must read for all conservative politicals

What did you love best about Take No Prisoners?

Horowitz has an insight to the mind and heart of the left like no other conservative. His intimate understanding of this provides invaluable insight that I wish we could impart into good candidates. It is information that needs to be absorbed if we ever want to win elections that don't accidentally fall into our laps. We conservatives naively want to continue trying to reach the liberal voter's center of reasoning with 'convservativethink', but it is speaking a language they don't understand. Horowitz outlines the 'why' and 'how' providing several 'Ah ha!' moments, and suddenly it will become clear to you why those mind numbing, frustrating debate attempts with your liberal friends and family never get anywhere.

Every conservative candidate and campaign staffer should read, and re-read, this book. Mr. Horowitz knows the other side (he was one of them), and he has some great ideas on fighting back.

Get to the point

I understand how evil the liberals are. I get that. Most of the book drives that point.

The last 2 chapters address the premise of the book; how to deal with the dirty politics of the left. I was expecting more case studies of what the left does to get elected and strategies of how to fight it.

I was hoping for a more business like approach instead of an emotional lecture why the left is wrong.

What did you love best about Take No Prisoners?

David calls out the Republicans for being too civilized. This is trench warfare and conservatives need to understand that others are defining us.

If you could give Take No Prisoners a new subtitle, what would it be?

Don't Bring a Knife to a Gunfight

Every conservative with an interest in politics must listen to this or read this book. Democrats lie, cheat and steal. Ann Coulter documents this in her books Mugged and Demonic.

Finally The Truth being Told

What a great book. I will look for more books written by author to read. A must READ

Historys written by the victors & were still @ war

Growing up in Chicago, leftism was the indoctrination I loosely subscribed to given no other choice in school or otherwise.
The COVID situation immediately opened my eyes to the media and their not only hiding what was going on at first, but the lies thereafter. This issue extending to politics and through big business and even non profit organizations like the one I work for.
I'm surprised that after listening to blackout by Candace Owens, this book was recommended by audible considering all that it encompasses.

should be required reading

I Have to say that listening to a former communist about how communists operate is probably a good idea. when you're trying to defeat an enemy, you better get to know their tactics or you haven't got a chance. Anyone running for office should read this before you start your campaign. you can't fight the good fight if you don't get in the battlefield and to get there you have to win the election.