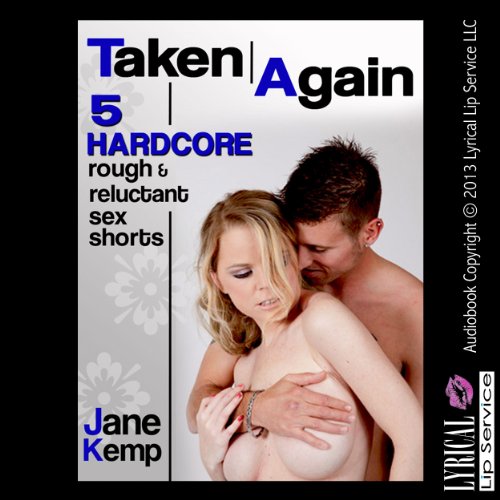 Nobody does rough reluctance better than best-selling author Jane Kemp, and she's back with five more stories of beautiful women taken without mercy by strong and sexy men. These stories are filled with unrelenting hard and rough sex between forceful men and reluctant women. If you like soft sensual erotica, this book isn't for you. If you like spanks, slaps, furious pounding, double-team sex, rough anal sex, and dubious consent, click to buy now! Be sure to listen to each reluctant encounter to the end in order to enjoy this best-selling author's always surprising twists. You'll want to be Taken Again...and again, and again, and again!

"Taken on the Highway: Double Penetration by the Boys in Blue": Gaby is late for a shift, and nobody wants to be pulled over at three in the morning when it's dark and empty out on the highway. When two cops make it clear they're less interested in her driver's license than her ass, things get even scarier. Before the night is through, she'll have police cock in her throat, her pussy, and her ass! She may not be able to get to her shift on time, but she'll certainly get all of the attention these two men can offer!

"Taken at the Track: Reluctance Under the Bleachers": Nina loves running, but she's a little put out by the creepy man who seemed to watch her on her last run. So, perhaps she should never have taken the shortcut into the dark area beneath the bleachers. Before she knows it, this lovely athlete has her arms pinned to the wall and a stranger with a thick hard cock is ready for her mouth and more, and this man doesn't want to hear the word "no".

What listeners say about Taken Again

Rubbish...RATHER SOMETHING ELSE WITH A STORY LINE

Rubbish...RATHER SOMETHING ELSE WITH A STORY LINE...LIKE THE EROTICICA BUT THIS HAD NOTHING TO PUT YOUR TEETH INTO

Would you be willing to try another one of Nichelle Gregory and Jennifer Saucedo ’s performances?

If you could play editor, what scene or scenes would you have cut from Taken Again?