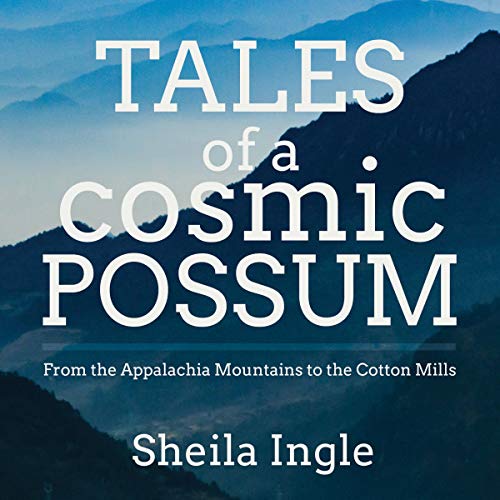 Tales of a Cosmic Possum: From the Appalachia Mountains to the Cotton Mills

Written by: Sheila Ingle
Narrated by: Lori VanScyoc
Try for $0.00

Sheila Ingle's husband, John, was brought up in Ingle Holler in Union, South Carolina, with eight other Ingle families. They worked together in the mills, shared their gardens, attended church, and enjoyed the playing and singing of the songs from the Grand Ole Opry.

When five of the brothers went off to war, those who couldn't fight took care of their families. The Ingles stuck together, just like they were taught in the Appalachian hills of Erwin, Tennessee. Love of God, love of family, and love of country were modeled in each home. In fact, one year, Make Ingle put his sons and grandsons together to build Hillside Baptist Church.

Adults kept up with the newspapers and the radios; world happenings were important. Any type of sickness brought a barrage of soup and cornbread because children still had to eat. On those 20 acres, the children played in the creek, cowboys and Indians, and hide-and-seek. They built their own wagons and sleds to race down the hill on the dry hickory leaves. All the boys learned to shoot a .22 caliber, and John's mother, Lois, could light a match with her shots.

Living in Ingle Holler was home, where everyone was accepted.

What listeners say about Tales of a Cosmic Possum: From the Appalachia Mountains to the Cotton Mills