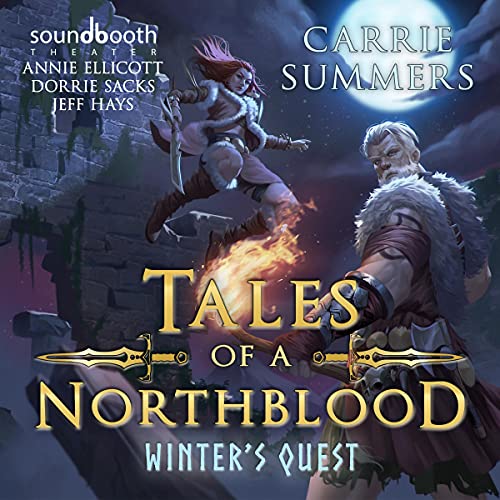 Tales of a Northblood: Winter's Quest: A LitRPG Saga

His first task was to survive. Now Jace must save the only people he's ever cared for.

Back in his old life, Jace was a loner. He didn't need friends or community, and judging by his romantic failures, he didn't need a girlfriend either. Or more accurately, any girlfriends he managed to attract quickly found they didn't need him. But now, everything has changed.

Yanked from that old life and shoved into a harsh world governed by game rules, Jace has built the first true home he's ever known. Ironstead, a settlement on an outcrop overlooking a savage coast, is a refuge in a dangerous land. The villagers call him their leader. Mackenzie, the woman of his dreams, calls him whatever she pleases because there's no arguing with her spunky smile or quick temper. And Jace is pleased to look around the nightly campfires, and realize he can call these people "friends".

But like a dark tide seeping up through beach cobbles, evil magic is slowly flooding the region. Barricaded in the region's stronghold, a fortress called Graymist Hold, a crazed and power-hungry woman summons the darkness. The region is doomed unless Jace and his friends can figure out a way to stop her.

Join the newest adventure. Scroll up, and click Buy to continue the Northblood saga

What listeners say about Tales of a Northblood: Winter's Quest: A LitRPG Saga

I want to start by saying that I absolutely adored the first installment. The story line was great and the character and relationship progressions all seemed natural. And it was in the same universe as Stonehaven Leauge with a nice little mystery about what was different and why things changed.

I also want to point out that Annie Ellicott, Jeff Hayes, and Dorrie Sacks do a marvelous job, as expected. Unfortunately I cannot give "performance" and "story" equal weight in my overall rating.

I was really looking forward to more of the same... I had no doubt there would be amazing narration... I was expecting to see the MCs grow and improve as they continue to figure out whats going on in their new world... I was enjoying the possibility that the subtle romance would continue (for LitRPG... several series that include "romance" are not even close to subtle, but I recognize this description is relative to authors and reader-preferences).

Instead I couldn't get ¼ of the way in before regretting even starting the series. THE SERIES! Not just the book. I still love the MCs and want to love this book so badly, but the most revolting, unappealing, and hated parts (for me) of the Stonehaven Leauge series show up in Northbloods and JUST. WON'T. LEAVE.

I don't want to give any spoilers, so I will leave you with this final comment... if you loved every part of and character in Stonehaven Leauge, go for it! I envy you so very much. If you thought there was one or more cringe-worthy parts/characters/aspects of Stonehaven Leauge, I caution you to reconsoder and implore you to seek out a few spoilers before diving in.

Some people are commenting that the book has predicable endings and too much plot filler. That is not the case. Filler and details are what makes litrpg novels awesome. Without the filler, it's missing something. These books and all the books by this author are straight fire

You. Write things i want to skip because they ate filler twists in a plot .., as a reader i see it comeing and just skip thoes parts till it’s over ... and that bugs me when i need to do it more then once a book and this book has a few half baked plot twists.... i’m not saying it’s bad because some people are just that oblivious but i’m not or i just can’t ignore the obvious... either way please don’t say something that you just at ine chapter and then the next add it in like it’s do dramatic... makes me want to cry and stop reading cuz i’m like 1/2 through the book and i can already see the ending