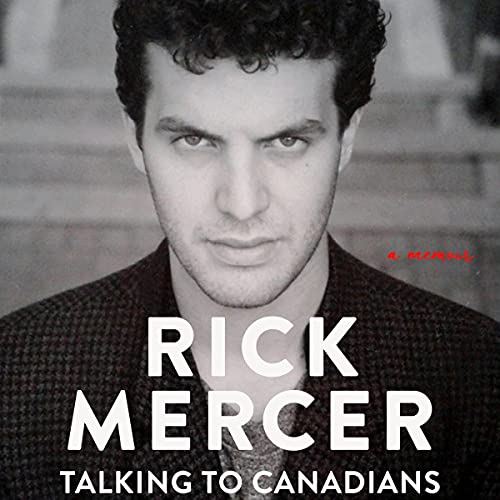 Canada's beloved comic genius tells his own story for the first time.

What is Rick Mercer going to do now? That was the question on everyone's lips when the beloved comedian retired his hugely successful TV show after 15 seasons - and at the peak of its popularity. The answer came not long after, when he roared back in a new role as stand-up-comedian, playing to sold-out houses wherever he appeared.

And then COVID-19 struck. And his legions of fans began asking again: What is Rick Mercer going to do now? Well, for one thing, he's been writing a comic masterpiece. For the first time, this most private of public figures has turned the spotlight on himself, in a memoir that's as revealing as it is hilarious. In riveting anecdotal style, Rick charts his rise from highly unpromising schoolboy (in his reports "the word 'disappointment' appeared a fair bit") to the heights of TV fame. Along the way came an amazing break when, not long out of his teens, his one-man show Show Me the Button, I'll Push It. Or, Charles Lynch Must Die, became an overnight sensation - thanks in part to a bizarre ambush by its target, Charles Lynch himself. That's one story you won’t soon forget, and this book is full of them.

There's a tale of how little Rick helped himself to a tree from the neighbors' garden that's set to become a new Christmas classic. There's Rick, the aspiring actor, braving "the scariest thing I have ever done in my life" by performing with the Newfoundland Shakespeare Company; unforgettable scenes with politicians of every variety, from Jean Chretien to George W. Bush to Stockwell Day; and a wealth of behind-the-scenes revelations about the origins and making of This Hour Has 22 Minutes, Made in Canada, and Talking to Americans. All leading of course to the greenlighting of that mega-hit, Rick Mercer Report....

It's a life so packed with incident (did we mention Bosnia and Kabul?) and laughter we can only hope that a future answer to "What is Rick Mercer going to do now?" is: "Write volume two".

"Talking to Canadians: [a] funny, pitfall-strewn, no-holds-barred memoir from the ranting TV uproarist, edge-walker, envelope-pusher and pot-stirrer who once talked me into impersonating a goalie!" (Margaret Atwood, via Twitter)

What listeners say about Talking to Canadians

Rick is so funny & entertaining! I truly enjoyed this book and can’t wait for the next edition! Rick, you are a real Canadian treasure!

What’s not to love

It was my first audio book and I loved it. Entertaining and you could imagine being present for every story. Worth every second.

Rick Mercer- Canada Loves You.... loved the story, made me laugh and cry. Amazing life.

Not to be missed!

I was driving 20 hours across Ontario and when looking for an audiobook was looking for one that would keep my interest. I had the good fortune of being at a taping of the Rick Mercer Report and though I hadn’t read any book reviews I thought that his memoir could be entertaining. I enjoyed every minute of it. It was both informative and highly entertaining. I was laughing out loud many times through the book as well as some tears along the way. Rick Mercer is a gem and I so appreciate him sharing his adventures!

great book, just a bit short or with an ending in the middle of the story.

Loved it!
Made me laugh and at times wipe away a tear
Great job Rick

Loved listening to Rick tell his story - many relatable Canadian moments and many wild times to learn about. Would have loved to hear even more. His influence on Canadians is profound and much appreciated. Like the mom of a birthday party making such all the kiddos have had enough cake and a good time. Thank you.

I loved this book, I learned alot. I love this Country and it's people. I have always been a fan of Rick's he is smart, doesn't hold back and has a heart. He is one of the good ones and has an undeniable talent.

What a fun read/listen to Rick Mercer. It brought back lots of memories of This Hour has 22 Minutes and the Rick Mercer Report