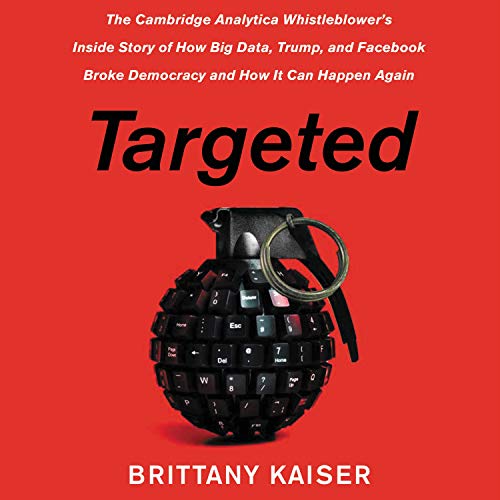 In this explosive memoir, a political consultant and technology whistleblower reveals the disturbing truth about the multi-billion-dollar data industry, revealing to the public how companies are getting richer using our personal information and exposing how Cambridge Analytica exploited weaknesses in privacy laws to help elect Donald Trump - and how this could easily happen again in the 2020 presidential election.

When Brittany Kaiser joined Cambridge Analytica - the UK-based political consulting firm funded by conservative billionaire and Donald Trump patron Robert Mercer - she was an idealistic young professional working on her fourth degree in human rights law and international relations. A veteran of Barack Obama’s 2008 campaign, Kaiser’s goal was to utilize data for humanitarian purposes, most notably to prevent genocide and human rights abuses. But her experience inside Cambridge Analytica opened her eyes to the tremendous risks that this unregulated industry poses to privacy and democracy.

Targeted is Kaiser’s eyewitness chronicle of the dramatic and disturbing story of the rise and fall of Cambridge Analytica. She reveals to the public how Facebook’s lax policies and lack of sufficient national laws allowed voters to be manipulated in both Britain and the United States, where personal data was weaponized to spread fake news and racist messaging during the Brexit vote and the 2016 election. But the damage isn’t done Kaiser warns; the 2020 election can be compromised as well if we continue to do nothing.

In the aftermath of the US election, as she became aware of the horrifying reality of what Cambridge Analytica had done in support of Donald Trump, Kaiser made the difficult choice to expose the truth. Risking her career, relationships, and personal safety, she told authorities about the data industry’s unethical business practices, eventually testifying before Parliament about the company’s Brexit efforts and helping Special Counsel Robert Mueller’s investigation into Russian interference in the 2016 election, alongside at least 10 other international investigations.

Packed with never-before-publicly-told stories and insights, Targeted goes inside the secretive meetings with Trump campaign personnel and details the promises Cambridge Analytica made to win. Throughout, Kaiser makes the case for regulation, arguing that legal oversight of the data industry is not only justifiable but essential to ensuring the long-term safety of our democracy.

What listeners say about Targeted

The book by the other whistle blower (Mindf*ck) is a more interesting and well rounded account of the Cambridge Analytica story. This book has minimal unique information.

The title of “Targeted” suggests that it will be about Cambridge Analytica’s data operations.

It only tangentially is.

Primarily it is Kaiser telling her story of how she came to work for the company, how and why she kept working there, and how she came to part ways then turn evidence against the company. The author writes that her role in business development did not include particularly deep involvement with company’s infamous data operations, and when we get to them at the very end of the book she writes that she is as surprised as everyone else.

If you are interested in Kaiser’s story specifically, or a more work-a-day perspective from inside such a company operates day to day, then check the book out. If you are looking for a deep dive into the company’s operations then you will likely be disappointed.

I came away feeling like I’d heard an unreliable narrator attempt to whitewash herself for twelve hours.

An fascinating memoir by a major whistleblower exposing the robbing of the populace’s data mainly by Cambridge Analytica, but also by funding entities, Facebook & other key players. The most essential part of the chronicle are the last couple of chapters & epilogue.

Listened as a follow up to The Great Hack. So glad I did. Arguably the most important book you could consume prior 2020 election.

My favorite part of this book is the Epilogue. It lays out an action plan! Thank you, Brittany, for not only opening my eyes, but giving me a path to follow! This is ‘must read’ information. I encourage anyone to listen/read and then act.

This is what the current higher educational system is producing. Brilliant minds that can't think for themselves and brainwashed by an agenda ran by halfwits.

Why owning your own data is so critical

I listened to Brittany’s book in the midst of the Coronavirus pandemic. It’s one of those critical moments, like 9/11, when big data companies (like Amazon, Facebook, etc.) and governments are going to take advantage of panic and fear to further encroach on civil liberties and dig their claws deeper into our personal data. Targeted gives us a personal story and insight into how she was co-opted into giving her talent to the “evil side.” The most amazing thing in her story is that the experience didn’t make her totally cynical. On the contrary, she ends on a hopeful note - and in her final acknowledgments gives specific suggestions about what one can do to change things. Her move into the blockchain movement following her experience at CA makes perfect sense. It is the platform/technology that, at the moment, holds the greatest potential for us to take back ownership of our data.

This book gave me some hope, where previously I had none, that citizens and human beings in general, can own their future. That we are not condemned or destined to be the victims of so powerful manipulation capabilities of manipulating us, by the strongest companies and governments in the World.
Still I am sckeptical. Civil causes take more time than profit or power generating forces. Hopefully we are faster this time.
Thank you Brittany!

One of those books you better read...

Probably one of the best audiobooks I’ve ever listened to. The details of the events that took place at Cambridge Analytica are incredible and eye opening.