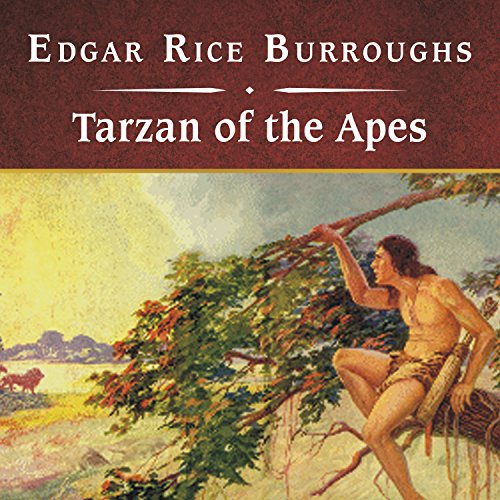 Tarzan of the Apes

Born of noble stock to parents marooned on the savage West African coast, the young Lord Greystoke is orphaned in his first year of life. Named Tarzan by the great apes that raise him, he must learn the law of the jungle to survive. As he matures, his strength and agility develop to match those of the beasts by whom he is surrounded, yet he realizes he is different. He combines higher intelligence, superhuman strength, and his jungle training to become the unconquerable Lord of the Jungle! But when a group of civilized people invade his paradise, his life is changed forever, for with them is Jane, the first woman Tarzan has ever seen. Now he must have her as his own! How can this uncivilized ape-man hope to win her?
©2000 Tantor Media Incorporated
Classics Historical Fiction Literature & Fiction Literary Fiction
Show more Show less

What listeners say about Tarzan of the Apes

This is not the movies.

The story is so much better than any movie adaptation. There is a reason for the popularity of the series. Wonderfull presentation by Ms. Faser. The story kept my attention to the end.

If one can look past the racism of the story (both toward African savages and the African-American servant), this is an entertaining and moving story. The British reader narrated beautifully but did a poor job on the American voices, making it difficult to distinguish among the golden-haired Jane, her pedantic professor father, and her cowardly and foolish mammy.

Amazing story
I thought I wouldn't like it because it was dated, but the book was so engaging and had my attention the entire time. I would highly recommend this to those who are fans of the Disney version of Tarzan.

I’ve loved the Tarzan books all my life and I’m starting over at the beginning of the series. I’ve enjoyed renewing the adventure and romance that this book embodies.

The narrator is wonderful and brings a fresh take on a series that is typically read by stuffy old men trying to sound like Teddy Roosevelt reading Dickens. I would love to see Shelly Frasier read the entire series.

I highly recommend this book. So much of the source material gets misconstrued in the movies and television. Treat yourself to the original story.